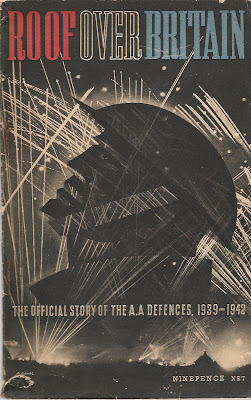 Sorting through my mother’s bookcases, I came across this interesting little booklet published for the War Office and the Air Ministry, by the Ministry of Information in 1943. It’s all about the ‘static air defence’ of Britain, and is an account of Britain’s anti-aircraft (‘ack-ack’ in popular slang) defences from 1939 to 1942. As the War still had two years to run, besides supplying information the booklet would also of course have been intended to raise morale. The Foreword states that –


This book supplements and continues the story of how the R.A.F. defeated the attack of the German Air Force during the autumn of 1940. Much of the air fighting has already been described in “The Battle of Britain”. But the fighter squadrons never constituted the whole of our defensive system. It has therefore been thought worthwhile to tell the story of the static defences – A.A. guns, searchlights, balloons and the Royal Observer Corps...  Though their story is not dull, the life and the work of the men and women of the static defences very often contains every degree of exasperation. They have had to fight the canker of armies, monotony – often in isolated stations far from their own homes and from anybody’s home.

Continuing, ‘It isn’t easy to shoot down a plane', and reminding readers of the weighty responsibility of the gun crews in determining whether an aircraft was in fact hostile or not, the book provides some statistics: 'During the first two years [of the war] just on 600 planes were shot down by A.A. fire over this country', from stations ranging from Dundee to Dover, from the Isle of Dogs in London to the Shetlands Isles. 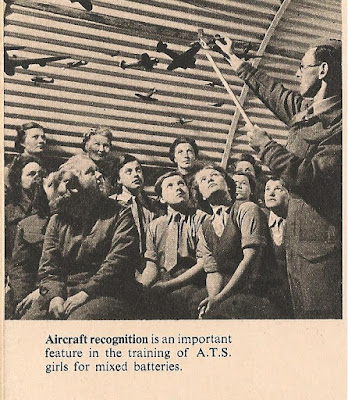 Women played a vital part in these ‘static’ anti-aircraft operations. As members of mixed batteries, women of the Auxiliary Territorial Service (ATS) operated searchlights, tracked enemy aircraft and controlled the direction of the guns. Though the official line remained that they did not fire them – ‘Women man everything except the guns themselves in Heavy A.A. units, and man them extremely well,’ declares the booklet – it seems highly likely that in actual fact they sometimes did. An officer commanding the first mixed battery to bring down an enemy plane is quoted thus: ‘The girls cannot be beaten in action and in my opinion they are definitely better than the men on the instruments they are manning. Beyond a little natural excitement which only shows itself in rather humorous and quaint remarks, they are quite as steady if not steadier than the men. They are amazingly keen at going into action, and although they are not supposed to learn to use the rifle they are as keen as anything to do so.’ 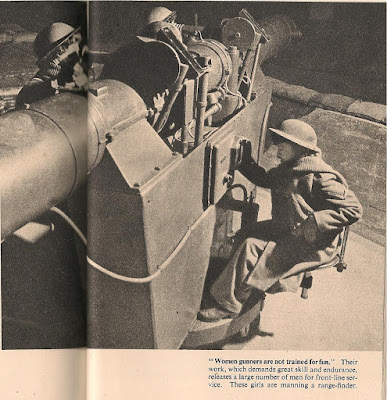 The tone of the booklet is hilariously defensive about the involvement of women in this kind of active service. Someone in the War Office must have had the pragmatism and imagination to get it all going, but they clearly had to defeat a lot of scepticism. The need was felt, for example, to reassure readers that 'special regard' was being paid to 'the women's need for 'fresh fruit, salads and milk foods; and a balance was found between this and the spotted dog and cheese and pickles beloved of the old soldier'. Huh? Anyhow:


The first battery started training in spring, 1940. The A.T.S. members were picked from volunteers, and the men were newly joined recruits, the point being that men who had known no other army life would not find the atmosphere of a mixed battery so hysterically unorthodox. There was considerable anxiety as to how men and women would work together, but there need not have been. They took each other very much for granted; there was none of the musical-comedy-chorus atmosphere which had been anticipated, partly, no doubt, because such men and women had been working side by side in civilian life for years.

If your eyebrows rose as much as mine did on reading those words, maybe you, like me, will reflect on how much women still had to prove – how unusual it still was for men and women to do the same work – and to admire the common sense of those who, in charge of what was obviously seen as a daring experiment, took care that the men and women involved started on an equal footing of inexperience.  It worked.


The idea of men and women marching, eating, drilling and working together – all this under the auspices of the British army – was not without a certain revolutionary tinge. In a mixed battery, women drive and service the trucks, act as sentries and despatch riders, and, in fact, do everything but fire the guns... far from resenting the A.T.S., the men in the mixed batteries show a very real pride in the girls’ work and are the first to defend them against their critics... 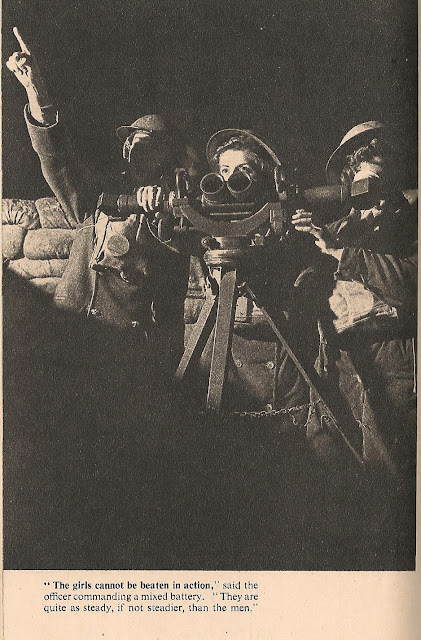 It wasn’t only in the A.T.S. that women served in the anti-aircraft defences.  In 1941 the Women’s Auxiliary Air Force – the W.A.A.F.s. – began to take over the deployment of barrage balloons. These were used to protect targets such as ports, factories and convoys from dive bombers and low-flying aircraft, driving enemy planes to heights from which accurate targeting – especially at night – would be difficult or impossible.  Balloons were therefore often themselves targeted, and hauling them up and down was a physically arduous business.


In the middle of January 1941, the Air Officer Commanding, Balloon Command, was asked to consider a suggestion that the flying of balloons could be completely carried out by the W.A.A.F. At first, this suggestion was received with dismay. ... The manning of balloons for 24 hours a day, frequently in the most appalling weather conditions, required physical strength not usually possessed by women... 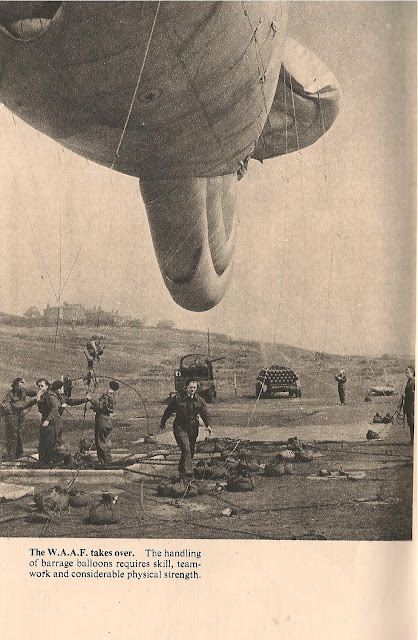 Once again, given the chance, the women proved the doubters wrong. By May 1941 the first batch of volunteers had gone through ten weeks of intensive training, and – says the booklet –


Every week since then the W.A.A.F. have taken over more and more balloon sites. They will continue to do so until a very large proportion of the Balloon Barrages in the British Isles will be manned by airwomen. ... The Balloon Operators of the W.A.A.F. will still have to endure the weather as well as attack from the air, but they have already shown that they can take it. Theirs is undoubtedly one of the hardest jobs undertaken by women in the war, but they have tackled it and succeeded at it. 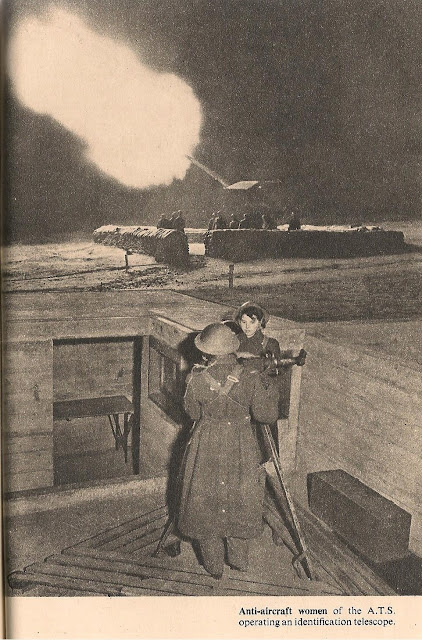 So interesting...thank you... and I think you might also like this blogpost which sheds more light on conflicts in tone/message in the Ministry of Information publicity material during the war:
https://history.blog.gov.uk/2015/06/18/invasion-publicity-during-the-second-world-war/

I met a woman during the 1950s who helped man ack ack guns in London during the war because most of the men were fighting elsewhere. I was impressed!

My Mother was an ack ack gunner on the Isle of Sheppy, and she recalled that after the bombing raids ended she helped shoot down the "doodle bugs"

I have this same booklet, my mum was an ack ack gunner in Portsmouth I think, and my grandmother had this, bought to get a feel of what mother was doing, I think, as mum had managed to get herself posted (in Portsmouth) as far away from home as possible, as my grandmother was rather domineering. She’d wanted mum to work in one of the local factories when she was called up, but mum’s always told me hell’d have frozen over first! If she was going to have to do this (she was 18) then she was going to get away and have a bit of a life while she was at it!

Anyway, the front cover of my copy has had its corner cut off, for some time, so it was lovely to see this complete front cover at long last! Thank you, a very interesting read.

PS - looking at the cover I see it gives the price, ninepence. That explains the corner being cut off, it must have been a gift.

PP - thankyou! And lovely to see 'old' posts still receiving attention. I shall raise a glass tonight in toast to your mother.