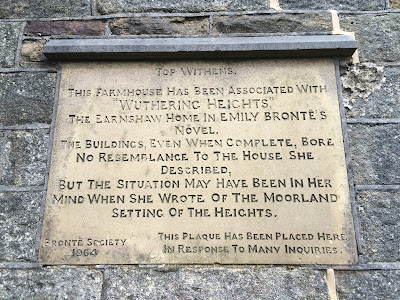 This is the plaque that greets you when you reach Top Withens. Thousands of tourists make the steep climb from Haworth to see the ruins that supposedly inspired Emily Brontë’s Wuthering Heights. I feel sorry for the ones that turn up with their expensive Nikons and Thermos flasks, buffeted and muddied, to find that this isn’t the ‘real’ Wuthering Heights at all. Brontë scholars tend to agree that there’s no such thing. So why has the legend become attached to this tumbledown farmhouse on the moors?

The first definite association with Top Withens appears in a nineteenth century edition of the Brontës' work. In 1872 publisher George Smith commissioned an artist to illustrate a new anthology. He wrote to Ellen Nussey, a close friend of Charlotte’s, asking if she know the names and locations of the ‘places so vividly described’ in the sisters’ work. Frustratingly, we have no record of Nussey’s reply but Smith certainly wrote to thank her for her help. When the edition appeared, Wuthering Heights included a drawing of the Sladen valley, with three isolated farmhouses in view: Near, Middle and Top Withens.

I’ve visited several times myself, in different seasons and different weathers, while researching a work in progress that’s set in the area. Depending on which path you take it is possible to find yourself completely alone, with no human habitation in sight and nothing but a vast sky, the call of curlew and the whistle of the ever-present wind to spark the imagination. It feels wild and remote. As poet, Ted Hughes put it:

Are a stage for the performance of heaven.
Any audience is incidental.

We have a tendency, these days, to romanticise these moors. The Brontë sisters would not have experienced them as we do, with our waterproofs and wellies, a place to be visited before retreating to the safety of Haworth for a cream tea or a pint in The Black Bull. In the past the moors were seen, rightly, as dangerous places, savage and deadly, the blanket bog a path straight down to Hell.

But Emily Brontë loved the moors. They were a playground and an escape. As an adult she walked them regularly, alone or with her sisters and they feature heavily in her writing. Her fictional interpretation of the landscape has become one of the reasons for our own romantic view, but she would have been well aware of the hardship and danger for the people who lived and worked there.

The first recorded owner of ‘Wythens’ (later to become Withens or Withins) was George Bentley, a clothier who bought the land from Thomas Crawshaye in 1567. Of the Crawshayes and those that came before, we have no knowledge. On his death, George bequeathed his estate to his grandson William and in 1591 the land was divided between William’s three sons, as detailed in his will. Three farmhouses were allocated to the three men: Near, Middle and Top Withens. You can still find the ruins of all three.

The next recorded owner of Top Withens doesn’t appear until 1813; a John Crabtree who, in turn, leased it to Jonas Sunderland. Jonas, his wife Ann and their descendants lived at Top Withens until the end of the nineteenth century. It’s likely the family would have known the Brontë siblings, at least by sight. By the time the house passed to Ann Sharpe (née Sunderland) and her husband, Samuel in 1888, the area had already been dubbed ‘Brontë Country’ (the term first appears in a guidebook of that year).


By 1895, Ann Sharpe was dead, leaving Samuel to bring up their young daughter, Mary, alone. It must have proved too hard a life for Samuel – a year later they had moved to a valley farm named Sheep Holes and the house was abandoned.

As far as we know it stayed that way until the early 1920’s when an invalided ex-soldier named Ernest Roddie took up residency. The Yorkshire Evening Post ran a series of articles about him and even sent a reporter to interview the mysterious Ernest, who lived alone with just his dogs and chickens for company. Following his first winter he said:

‘I think Top Withens is the place for me all right. We have some rough weather up here … It’s been fearful cold since Christmas and there are days when the snow’s been so thick I couldn’t get the cart down to Stanbury.’ But, he said ominously, ‘a man can’t be lonely at Wuthering Heights.’

How much of this is poetic license on the part of the journalist we’ll never know, but by 1926, the harsh lifestyle had beaten Ernest too and he moved back down to Haworth, leaving the house to the elements.

The crumbling ruins have been a source of scholarly conflict ever since. A grade II listing in the 1950s was revoked in 1991 and clumsy concrete repairs do little to retain any historical authenticity. The Brontë Society famously repudiated the link with Wuthering Heights, as the firmly worded plaque suggests, but Brontë fans still come from all over the world to pay homage.

Emily would have known Top Withens as a working farm inhabited by the Sunderland family. Its situation at the top of the valley on the edge of the windswept moor may bring to mind the setting of the Heights, but the building itself is not the house described in her novel.

Several other houses that Emily would have known have been put forward as prototypes, including Ponden Hall (also mooted as the model for Thrushcross Grange) and High Sunderland Hall, now sadly demolished. Although perhaps too grand for a farmhouse, my money is on the latter. But I expect it’s not that simple. My current project is similarly set on an isolated working farm on the West Yorkshire moors. I’ve used elements from several local houses to create a fictional one. I suspect that's exactly what Emily did too.

Perhaps the association with Top Withens is just a romantic myth but when you stand by the ruins, look out over the desolate moorland and think of the people that made a life here, it’s hard not to be swept up by the atmosphere. I’ll leave the description to someone who knew it better than I ever will…

"Wuthering Heights is the name of Mr Heathcliff's dwelling. `Wuthering' being a significant provincial adjective, descriptive of the atmospheric tumult to which its station is exposed in stormy weather. Pure, bracing ventilation they must have up there at all times, indeed; one may guess the power of the north wind blowing over the edge, by the excessive slant of a few stunted firs at the end of the house; and by a range of gaunt thorns all stretching their limbs one way, as if craving alms of the sun."

There's an exhibition at Cliffe Castle Keighley with regards to Top Withins. Their curator was telling me about it very recently! http://www.keighleynews.co.uk/news/14724020.Cliffe_Castle_in_Keighley_showcases_the_story_of_Wuthering_Heights/

Thanks for alerting me to this, Elizabeth. Funnily enough I was planning a visit to Cliffe Castle for another reason so this is great timing!

Cheers for the plug Elizabeth :) What a wonderfully timely blog piece!

If you're familar with the castle, it's upstairs in the top of the Bracewell Smith Gallery - a selection of rather lovely depictions of the Withins by Peter Brears.