Making History ... by One Foot by Julie Summers

I write a great deal about life in the middle of the last century and about people who made history in a variety of different ways. Today I want to tell the story of a group of young men who made history nine years ago and who have joined the pantheon of greats in the small but exclusive field of Henley Royal Regatta rowing winners. Sunday 8 July 2007 and the market town of Henley-on-Thames is enjoying a warm afternoon. On the Buckinghamshire bank of the river the scene is one of colour, pageantry and tradition: blue-and-white striped boat tents marshalled neatly between the pink-and-cream Leander Club hard up against Henley Bridge, and the white marquees housing the grandstands and Stewards’ Enclosure on the downstream side. It is finals day of the regatta, the day when lives are changed for ever by the outcome of an individual race. At 3:50pm two crews of nine young men line up at the start, next to the lozenge-shaped island in the middle of the river crowned by an elegant temple designed by the eighteenth-century English architect, James Wyatt. The umpire is standing in a handsome launch, arms raised, holding a red flag vertically above his head waiting for the two coxes to indicate that their crews are all set. Are you ready? He sweeps the flag down sharply. Go! Sixteen blades dip into the water. They are off. 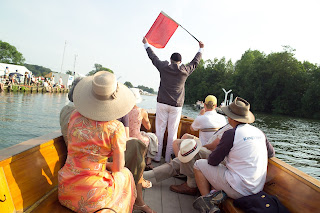 There is expectation and excitement all along the river bank – not least in the Stewards’ Enclosure where nervous parents fidget, check their watches, exchange anxious glances and wonder why the commentator has not mentioned the race yet. But patience. Then the deadpan announcement over the loudspeaker: The final of the Princess Elizabeth Challenge Cup is in progress between Brentwood College School on the Berkshire station and Shrewsbury School on the Bucks station. Brentwood College School are the Canadian National School Champions. No mention of Shrewsbury’s pedigree. Upwards of 100,000 people attend Henley Royal Regatta each July. It is an event caught in a bubble of history with echoes of a bygone era everywhere: fine hats, striped blazers, picnics in the car park come rain or shine, decorated launches bobbing on the white booms that line the course, Pimms jugs clinking with ice, champagne and oysters, a brass band playing military tunes, and all the while a titanic battle is being fought on the water. Brentwood had dispatched the favourites, Eton, in the semi-finals the day before and Shrewsbury had beaten Radley in a slower time. 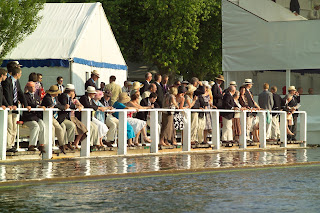 At the end of the island, both crews rating 42, Brentwood College School lead Shrewsbury School by half a length. Forty strokes in from the start and the Canadians already have a half-length lead. Six minutes to go. The grandstand is full of Shrewsbury supporters. There is barely a free seat, the atmosphere tense. Elsewhere people are milling around the bars and chatting. Henley is, after all, a great social event. It marks the end of the summer season, after Ascot, and coincides with finals’ day at Wimbledon. At The Barrier, Brentwood College School maintained their lead of half a length over Shrewsbury School. Time to The Barrier, 1 minute 58 seconds. A buzz. One second faster than yesterday. The Barrier is one of two points where intermediate times are taken, times that later will be scrutinised, compared, delighted at or despaired over. The spectators downstream can see the action first. Crowding along the river bank they get close-up views of the two crews battling it out in the early stages of the race. 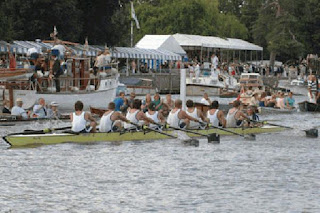 The next timing point is Fawley. Now there is a change: At Fawley, Brentwood College School’s lead over Shrewsbury School has been reduced to a quarter of a length. The grandstand is in spasm, spectators begin to move towards the river bank sensing a spectacle. Downstream the shouting has increased and the excitement is palpable. Can the home crew crack the Canadians? At The Three-Quarter Mile Signal Brentwood School led Shrewsbury School by 2 feet. The grandstand is on its feet, a roar is moving up the bank like a giant wave. Half the race gone. At the Mile Signal, Shrewsbury School had taken the lead. Wild elation but fear too. The Canadians were not about to give up and Shrewsbury supporters knew that. ‘We could see them now and it looked hell’, wrote housemaster Martin Humphreys to crew member Tom Hanmer’s parents. ‘Shrewsbury on the far side pounding away, looking a bit scrappy and tired, to be honest. Brentwood on the near side and neat and long. When they came past us Shrewsbury had a quarter of a length lead, but I could see the Canadians were eating into it with every stroke. This was grim.’ The two boats cross the line neck and neck. Then there is silence. The commentary ceases and the Finish Judge has to make his call. The wait seems interminable, time stands still. Then: The result of the Final of the Princess Elizabeth Challenge Cup was that Shr …. No need for the rest: the name of the winning crew is always announced first. The grandstand explodes in ecstasy … the verdict, one foot. More cheering. The narrowest, the shortest, the tiniest of winning margins imaginable, less than a sixtieth of the length of the boat.

For Brentwood College School a bitter blow. To be a member of a losing crew, however epic the race, there are no prizes. For the boys of the winning crew and their parents, unsurpassed joy, a matter of lifetime pride and for one man in particular this is a sweet victory. Eighty-three-year-old Michael Lapage watched his grandson, Patrick, help to win this great battle. Nearly seventy years earlier, on the same stretch of river, Michael had won silver for Great Britain in the 1948 Olympic Games. The legacy of a Henley win is a long one. It unites generations and brings tears to the eyes of the strongest of men. 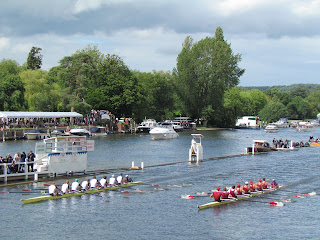 An extraordinary footnote to this story is that Patrick Lapage stroked the Harvard University boat to victory five years later. The verdict: ONE FOOT. Now there is history for you...
Posted by Unknown at 00:02

An exciting story, Julie!! I was on the edge of my seat wondering who won!
and great to read that Michael Laplage, who featured in my book about The Austerity Olympics of London 1948, is still going strong, and his grandson even stronger.

Thank you, Janie. It was a very exciting race and for my money the right crew won! Your book on the Austerity Olympics is inspiring. It should be read by every Olympic athlete.

I enjoy most of your articles,the articles are so nice for readers. you can buy my watches here www.breitlingreplica.co.uk.