Of course I should have brought binoculars.  Vast though it was - this panoramic wooden sculpture of London’s mid-seventeenth-century skyline, rising from a flat barge in the middle of the Thames - it looked worryingly far away.  And there was a boat in the way. As you can see, Sunday was a dull, grey afternoon.  We had pitched up absurdly early, friends and family, hoping to find a good spot on the riverbank, which we did.  Armed with a small picnic and some wine, we leaned against the very comfortable wall in front of the Sea Containers Building, watched the world and the water go by, and caught up on life. It was almost three hours before the burning was due to begin.  But I’m a committed queue-er.  I'm used to  sitting for hours by the river outside the Globe theatre to secure my favourite stage-side groundling view and conversation and good cheer always make the minutes slip by with amazing speed. Our previous experience of Artichoke public art events had convinced us it would be well worth the wait.

The finale of the 350th anniversary commemorations of the Great Fire of London - previewed in part here by fellow History Girl Imogen Robertson – was promised to be spectacular.  Hundreds of young Londoners - schoolchildren and young people 'not in education, employment or training' - had collaborated over months to bring to life American ‘burn artist’ David Best’s vision of the Restoration capital.


The crowds gathered behind us…we got talking to a few strangers…and joyous anticipation  flickered and caught hold.  Even the security guard who had to run along the sandy shoreline below us in pursuit of a few triumphantly stray spectators was kind and good-humoured as he retrieved them. Free public art brings peculiar health-and-safety headaches and London 1666 was ambitious: fire and water on top of unpredictable audience numbers.  The Great Fire 350 website certainly suggested a slight anxiety about overcrowding with its insistence that the best views would be online. That seemed unlikely.

As darkness fell, we saw the dome of St Paul’s begin to move, washed with smoke and colour and finally flames: the beginning of ‘Fires Ancient’, a projection by Martin Firrell.

Out on the river, pinpricks of torchlight moved about the framework of the small city, only to vanish.  Last checks, we assumed, and worried a bit about getaways.  A few pleasure craft seemed to be cutting it fine.  On the dot of half-past eight, the first spark appeared, right at the heart of the sculpture.


Just as it had in the city itself 350 years earlier, fire soon took hold and slowly spread.  Little by little, the exquisite intricacy of the sculpture’s latticework construction stood out ever more blackly against the flames, perfectly visible.


A brief, southerly gust of wind, and we felt the heat of it on our faces. At first I thought I’d imagined its warmth, but then it came again, and it was even warmer.Building after building caught light, spire after spire. The crackling intensified.  It had begun like the sound of rain pattering on a hard roof – the kind of summer shower you don’t notice until you look outside and run outside to gather in washing.  Soon it sounded vengeful. The entire barge was alight.

The clouds of smoke rushing upwards and eastwards developed an alarming but enchanting underbelly of embers, an abundance of golden sparks. 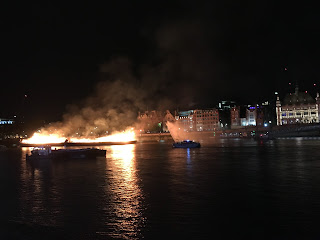 The fire-fighting boat which had been hovering nearby moved swiftly in to direct a cooling jet of spray at the danger. 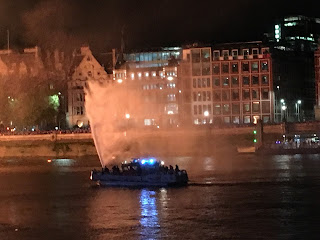 I no longer wanted binoculars.  It felt pointless even to take photographs, yet also impossible not to make an attempt, at least from time to time.  No image, moving or still, could possibly convey the complete experience of a performance like this – sounds, smells, sights and that invigorating sense of mass pleasure all combining to provide a extended magical moment, the more magnificent for being shared with so many. There were gasps as the larger structures collapsed, one after another, spires folding and beams breaking. At one point somebody tried and failed to set off round-singing - "London's burning, London's burning..." Mostly people stood mesmerised, from time to time confiding their wonder in low voices.  This was wonder laced with horror. The spectacle - a visual oxymoron, perhaps - lasted for almost three-quarters of an hour. It was the ultimate in twenty-first-century urban sublime.

Yesterday morning I was working nearby and couldn’t resist stealing away along the Embankment to see what, if anything, remained. 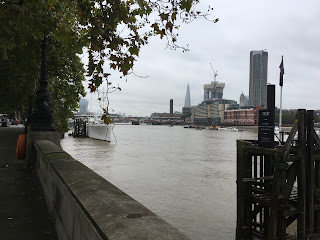 Nothing.  The barge had vanished, leaving thoughts and memories.

Something I learned this year was that on September 6th 1666, London was a city of refugees: 80 per cent of the City had lost their homes. The rich rebuilt, but the destitute had to survive for years in shanty-towns on the outskirts of London. There will be events today in central London to commemorate this aspect of the Great Fire, and think about contemporary resonances.

I’m also left remembering my very first introduction to the Great Fire – a lit-up scale model made for the old London Museum (originally housed in Kensington Palace) - and the memorable awe this always inspired when I went to see it as a young child.  As I got older, I noticed its flaws – the cotton wool smoke, the boy caught implausibly running through a flame.  But when Imogen wrote last month that she felt sorry for people born in London, as they could never have the pleasure of visiting the capital for the first time, it made me laugh. We're happy with that! I’m a Londoner, a proud Londoner, and brought up by several generations of Londoners too. The whole city was my playground, as it is now my children’s, and I was always blessed with older relatives who had long delighted in being Londoners.  They shared its secret spots and stories with me and my siblings and cousins, and untiringly took us up the Monument and St Paul's and on the river and in and out of the City's churches, squares, museums and parks. I’m thanking my family now.


PS.  Some children's fiction thoughts for the Fire of London: Two of my sons were particularly gripped by Pippa Goodheart's Raven Boy.  My daughter read and re-read Mary Hooper's At the sign of the Sugared Plum and its sequel Petals in the Ashes to the point of obsession. Any other suggestions?

It must have been quite a spectacle, but sad to think that all that work went into building an amazing sculpture, just for it to be burned!

Wonderful piece of writing - feel almost as if I was there!

Strange how beautiful that fiery destruction was. Lovely pictures. Thank you for mentioning my Raven Boy!

Thank you for taking us there, Lydia.
I didn't know anything about the event until watched the programme on TV last night, but your description and photos were even better.

Lydia, thanks for this! I'd been on the South Bank on Friday evening, and saw the early lighting of the Cie Carabosse fire garden, but couldn't return for the London's Burning itself, although I could dimly see the "skyline" barge. I caught up with the tv programme, at least, but great to be able to read your personal account of being there on the night.