On a recent rummage through one of my research notebooks post-publication – looking for material for blog posts that a publicist needed me to write – my curiosity was aroused by the pieces of information that I had decided ultimately to reject while I was writing my new novel, The Revelations of Carey Ravine. There are so many discoveries that appear plump with potential as the writing process gets under way – Yes! How fascinating! I can really use this charming factoid! – but, of course, the remorselessly directional nature of a plot forces you to discard a good number of these historical gems.

It interests me though that one of the skills of being a historical novelist, a particular skill, in fact, lies in learning to negotiate forests of research. It is all too easy to stray from the trail – and yet, also, you know that sometimes you ought to stray. We’ve all wandered spontaneously into shady avenues of investigation that have ended in unexpectedly rich pickings, the kind that make a story shine; but it’s really such an art, I think, to know when to respond to a come-hither historical fact, some alluring little footnote in an unpublished thesis, say, and when to walk on by.

It’s not difficult when the research is essential to the topic. When I was writing long sequences of action aboard a smuggler’s cutter in my previous novel, Turning the Stones, I needed to know everything about that kind of vessel. There was hardly a detail that was not relevant. The same was true of the novel's descriptions of a family of kelp-makers in 18th-century Ireland.


When the mise-en-scene is very particular, it is not hard to maintain focus in terms of research, but when I’m working on a broader canvas, that’s when I often find myself spoiled for choice and the what-if nuggets of historical info cause me to vacillate.

Take the Divan Club in St James’s Street (1744-46), for instance, a dining club founded by the Earl of Sandwich for gentlemen inclined to the exotic. It caught my attention, while I was on my way to an understanding of the rules of hazard – which are damnably confusing, I can tell you. But look, hazard be hanged, someone has written a fascinating article about the Divan Club. Perhaps a great deal of hazard was played there, in which case it would hardly be a diversion at all for me to look into it. But should I go there? Is the Divan a dead end – or could it turn out to be a productive lead? A valuable scene-enhancer? I admit I lingered there, on its silken couches, for far too long.

Most of the time, on a first draft, at least, I don’t know if I am about to plunge into a rabbit hole or a goldmine when an Interesting Fact pops up its winsome head in the course of research. (I don't mean a rabbit hole in the Carrollian sense – I speak of Google and its portals to distraction, or any bibliography or tasty-sounding citation.) I remember one day in the British Library falling under the spell of a lengthy 18th-century pamphlet on managing pests in filberts, and the nut gall mite in particular. As I read through this text, which was set in a squint-inducing broken font, it seemed to make increasing sense to me to abandon the idea I had been researching – that of a Huguenot market garden in Bethnal Green – and devise something completely different. A country house in Suffolk, perhaps. Sans Huguenots. With a grove of horribly compromised filberts lurking in its grounds. I went filbert-mad for at least twenty-four hours, before coming to my senses and returning to my original perfectly sound market garden in Bethnal Green. But not before investing way too much time on something that I really did not need to know.

Here are a few of the captivating possibilities that I did manage to resist, despite having introduced them to my notebooks with rafts of urgent underlining. They had little to do with what I was writing, but they so easily could have…

Protective Signs
I was poking around Rainham Hall in Essex a couple of years ago, when I came across a protective sign – a witch’s sign, they are sometimes called – on the wall of the back stairs that were once used by the Hall's servants. It is a device of raised plaster, so placed that you almost cannot avoid touching it as you put a hand on the wall just beside the door jamb to steady yourself, before mounting the narrow stairs. 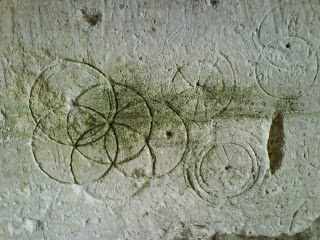 It was too dark in that space to make out the
details of the sign, save that it was circular. Perhaps it was a 'daisywheel', a symbol sometimes carved or plastered in out-of-the-way places like rafters or door lintels as a general protection against ill-fortune or supernatural forces. Had I descended into the world of protective symbols and spirit traps in ancient houses, I would have ended up writing an entirely different novel.

During the mid-18th century, Eliza Fay, an adventurer, businesswoman, correspondent and disappointed wife, taught herself shorthand. She was a woman of great intelligence and very limited means who was obliged by the deficiencies of her feckless husband to find ways to make a living. There were a variety of shorthand types in 18th-century England, all of which were arduous to learn. I liked the way Eliza applied herself to the task. She could see the potential to act as a recorder and it occurred to me that shorthand might be an advantageous accomplishment to add to the skills of a character who might veer between the occupations of stenographer and spy... in another novel on another day...

Nine sopping summers in a row

There was no end to the rain between 1763 and 1772 – and this in an age when the British held in disdain the effetely French habit of sheltering under an umbrella. Rain badly marred the summers in England and Wales, especially during 1763, when the Thames Valley was inundated.

The following year, summer thunderstorms destroyed churches and naval ships. The winters were a nasty piece of work, too, in those years, with bitter frosts and heavy snowfalls. In 1768, summer brought record deluges to England and Wales, beginning in June, with rain bucketing down for 36 days without cease. Swathes of the south of England flooded in autumn and early winter of that year and the London-Exeter coach was carried away, when the Thames burst its banks near Staines, with the loss of all six passengers and four horses. In 1770 it snowed in London during May – and the floods went on. Weather, especially historically accurate weather, is such a fruitful reinforcer of mood and usefully complicating factor in a narrative, that I considered altering the time frame of Carey Ravine in order to take advantage of these endlessly wet summers and the endlessly damp laundry. Alas, they did not fit with the political events I also wished to include...

The “disease” of nostalgia

In the very late 18th century, Thomas Trotter, medical writer and physician to the fleet, designated “scorbutic Nostalgia” a cause of scurvy, as well as a psychological disorder proceeding from melancholy on board ship that afflicted slaves and sailors pining for their homes. But incidents have been recorded of pilgrims, too, suffering from scurvy. In his Voyages and Travels in the Levant, an 18th-century naturalist named Fredrik Hasselquist, reported cases of scurvy at a monastery in Bethlehem, where pilgrims stayed. Were these wanderers also afflicted with nostalgia for home? In a Sanitary Commission Report from the American Civil War, published in 1862, nostalgia was considered a factor in the depression that was a symptom of scurvy in soldiers. I was very attracted to the idea of a wasting disease caused by wandering, and the idea of nostalgia as a source of torment, and thought to weave it into the Indian section of Carey Ravine, but it seemed a pity to treat it only tangentially. That rabbit hole has remained unroamed, at least for the present.

I’m drawn to accounts of the roles historical women played in trades, especially if they have anything to do with machinery. My father was a car mechanic and I grew up knowing my way around an engine. (The very first heroine I wrote, in a short film called Universal Drive, worked at a panel-and-paint garage as a spray-painter.) But, before I began to write, I worked as an assistant film editor in Soho and at Lee Studios on thundering old moviolas. It drove me crazy that despite my constant applications to join the film union (ACCT), I was always rejected because it was a closed shop. And yet the male assistant editors all around me seemed to get their tickets without any problem.  I feel that those women in the printing trade in early modern England are kindred spirits.

Of course, women did the drudge work – training schools existed in the 18th century that taught women how to set type – but there were women who printed books under their own signs. The rise of printers’ unions in the 19th century, however, was a blow to women's participation in the trade. Craft unions were closed shops, a boys' club, despite the socialist politics. But that's another story...

Fascinating! Don't like the sound of that 18th century weather - funny how you assume that summers in the past were always sunny. Would like to know more about the women printers...

Welcome to Debra, who has just joined the History Girls. Fascinating post.