Brilliant trail-blazer of expressionism, Gabriele Münter: Heard of her? by Leslie Wilson

In the summer, on our way from Munich to the mountains, we visited Murnau, a place I have long wanted to go to. It's where the Blue Rider school of expressionism found their spiritual home. This was due to a quality of the light in that town beside the Staffelsee and near the mountains, produced by the Föhn wind, a warm wind off the mountains which is also notable for giving people headaches.

. If you haven't heard of the Blue Rider, you might have heard of Vassili Kandinsky, August Macke, or Franz Marc. All of these are to be found in British art galleries. But have you heard of Gabriele Münter? Perhaps not. I haven't met many British people who have.
Gabriele Münter was born in Berlin, in 1877, and always wanted to paint, but had difficulty in achieving that ambition because of her gender. Women were only supposed to paint as a hobby. She began at the unpromisingly-named  'Damenkunstschule' (Ladies' Art School), but managed, in the teeth of her family's disapproval, to get herself to the Phalanx School, where she met Kandinsky. He was ten years older and married, but they fell in love.

Münter was a pioneer in lifestyle as well as in art; she rode a bicycle when that was still daring for a woman (or for a man, if it comes to it), wore avant-garde 'reform clothes', and lived with Kandinsky without marriage. And she was a professional, driven artist.

Kandinsky's view of her work was enthusiastic: 'I can't teach you, you have natural, innate talent. All I can do for you is to care for your talent and nurture it, so that nothing artificial spoils it.' He was right to respect her abilities. As too often happens, she has been written off as Kandinsky's mistress and muse, and her work dismissed as a reflection of his.

In fact, her enthusiastic adoption of different forms was ground-breaking, and she led the way. It was she who began to paint pictures behind glass, adopting the old Bavarian folk-art form and using it in innovative ways. The others followed in her tracks.

She was inspired by the vivid colours of the Murnau houses to paint equally brilliantly-coloured town- and landscapes in which the representational melded with the abstract: 'More and more I was comprehending the clarity and simplicity of the world.'
Much to the annoyance of some of the male Blue Rider painters, she contributed to the seminal 'Blue Rider almanac.' In 1911 the group put up an exhibition in Munich, which electrified and scandalised an art establishment still largely dominated by formal, academic art.

This rejection of established norms was happening elsewhere, of course: in Vienna, for example, where Gustav Klimt and his colleagues called themselves, simply, the Secession. When the Blue Rider exhibited, the attendants had the unpleasant task of wiping off the spittle from the paintings. 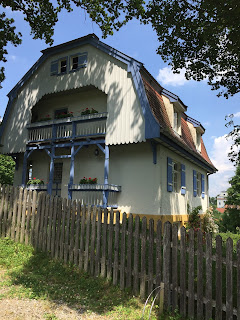 Kandinsky and Münter lived in a house she bought at the edge of Murnau, which was known, then, as the 'Russian House', and deeply disapproved of because of the scandalous lifestyle of its inhabitants, and their guests' habit of disporting themselves nude, including by the lake, where the locals might catch sight of them. On the other hand, Münter was intimidated enough by convention to leave the house, for weeks at a time, when Kandinsky's family came to visit. He kept promising to marry her, and never did, and as far as his family were concerned, she didn't exist. And she did regard it as her duty to provide him with a comfortable home and forward his career. I do not regard these facts as detracting from her own magnificent abilities. They only demonstrate the kind of inner and outer difficulties that gifted women have always had to contend with, and if we ignore them, we also denigrate the achievement of the women who went before us in battling their way through. 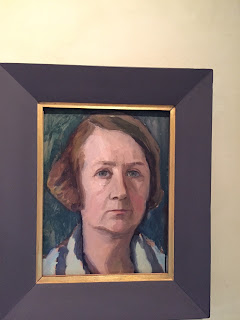 I first saw her work when I was in Munich in the '90s, and found it deeply exciting; her paintings speak to me in a way that Kandinsky's don't, nor any of the men. It is that simplicity and clarity which I adore. Though it is very different in style and colour, it takes me into the world opened up to me by the Danish painter Vilhelm Hammershoi. I find both her Blue Rider work and her later work equally magnificent.
It was a huge pleasure for me to visit the house Münter lived in with Kandinsky, in whose cellar she hid much of the Blue Rider work from the Nazis (because of course she was declared 'decadent' during that period). The best of the collection she preserved is now exhibited in the Lenbach House in Munich, and I do recommend visiting it, but there is some of her art still in the house, and you can see the furniture and woodwork that Kandinsky painted.

Excitingly for a blogger, photography is allowed in the Münter house.
She died in 1962 at Murnau.
If you're going to Munich this month, a major exhibition of her work will be held in the Lenbach House, and I wish I was able to be there!
http://www.lenbachhaus.de/ausstellungen/vorschau-2017/gabriele-muenter/http://www.lenbachhaus.de/ausstellungen/vorschau-2017/gabriele-muenter/

All the photographs were taken by me in the house. I cannot find any pictures of her greatest work on Wikimedia, but recommend an image search; there are wonderful reproductions on line.
Posted by Leslie Wilson at 00:30

Super posting and thank you very much indeed.

No, I hadn't heard of her but definitely want to see more of her work now. Fascinating post, thank you.

What a fascinating post - and lovely photographs. Thank you, Leslie. I hadn't heard of Gabriele Munter, though had heard of Kandinsky. I love the paintings behind glass.