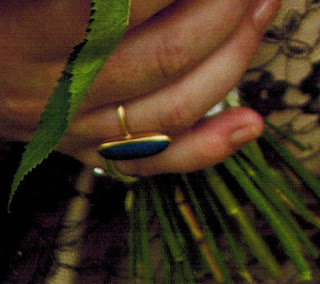 I lost a ring a fortnight ago in Brighton. I was / am deeply gutted as it was a present from my aunt, and she had had it from her aunt and the chain of ownership made it particularly special to me. It made me happy to wear it - the above is me wearing it on my wedding day.

I felt it slip of my finger (in Church Street in Brighton, just FYI) and spent forty minutes going up and down the street searching the gutters, but no luck. I've filed a police report and emailed some of the businesses on the street who very kindly said they'd keep an eye out for it and even went out and looked themselves, so that's the first happy thing out of the sad thing. People are very kind.

I've been thinking about my Great Aunt who first owned the ring recently. Her name was Constance Charlotte Robertson, she was born in Alnmouth in 1883 and she was the first female Doctor in my home town of Darlington. My grandfather recovered from his time as a POW in WWI (and a bout of Spanish flu) at her home. He met my grandmother there, and Constance introduced him to the man who would become his business partner, so it was that decision of hers to move to Darlington which meant I'm around now. I sneaked a mention of her into the end of my novel The Paris Winter, and at the end of last month got the details of her degree from the lovely archivists of Newcastle University. Yesterday I told Mum and Dad I'd lost the ring, and they were sorry for me and we talked a bit more about Constance. She was always called Dumps in the family, and I always think of her by her initials CCR, largely I think because they are engraved into some silver spoons we have at home, and it was how she'd mark her books which I'd find from time to time in my parents' bookshelves when I was a child. Anyway, I had another look on the internet to see if there was anything about her I'd missed, and found an article, published a few days after I lost the ring about her on the Durham at War website. So that is the next happy thing out of the sad thing.

Perhaps the gods of chance will bring it back to me. There's a family story from Alnmouth that my Great Grandmother lost her engagement ring on the beach when the family were having a picnic. The following year they were picnicking there again, and, digging her hand into the fine sand she said 'it was just about here I lost my...' only to find the lost ring in her palm.

But the last happy thing is what my husband said to me, 'it's your contribution to future archeology'. I should stress that's not the first thing he said, he was extremely sympathetic and offered to bother all his Brighton friends to go and look for it. I did say I would rather future archeology got my watch or my wallet, but still it is a comforting idea to think he might be right and that the ring may surface again, as a treasure in someone else's hands.


www.imogenrobertson.com
Posted by Imogen at 00:30

So sorry to hear this! I hope it turns up. You never know. Stranger things have happened. And if it doesn't... Well, perhaps someone is treasuring their find right now.

Your grandmother sounds like a truly special person who deserves an entire book to herself.
Technology In The World Of Harry Potter

I do hope that you find your ring, Imogen, but I am glad that it prompted you to find out more about your great aunt. Just keep looking! You never know when it might turn up.
Just thinking, would your blog make a good article/letter in the local paper? It's a very intriguing story.