Glenelg in the Scottish Highlands by Miranda Miller

I’ve just come back from visiting friends in this remote Highland community. As you can see from this sign, Glenelg really is twinned with Glenelg on Mars. NASA's roving robotic laboratory, Curiosity, is headed for a geological feature on the Red Planet that has been called Glenelg (a palindromic name was chosen by NASA because the Curiosity rover would visit the site twice). Back on Earth, in 2012, residents of Glenelg held celebrations, including a twinning ceremony and a ceilidh. Astronomers love the area because the dark skies around Glenelg have so little light pollution that stars and the Northern Lights can be seen very clearly.

According to legend, in a place where other planets and legends feel very close,the Giant Rhea heard that Glenelg was being attacked. He tried to come to the rescue, vaulting on his spear over the narrow strait, the Sound of Sleat, that separates Glenelg from Skye,  but it broke in two and he drowned. So the waters just there are called the Kylerhea narrows (Kyle is Gaelic for narrows).

Glenelg was once larger and more important, with a castle and a cattle market, and it appears on the map of the first atlas of Scotland, published by Joan Blaeu in Amsterdam in 1662. Before there was a ferry  thousands of cows a year used to swim across from Skye. There was a rock called Calf Rock where the drovers would make a calf stand, mooing to the cows to encourage them to swim across. Thomas Telford built a curved slipway to make it easier for the cattle to climb out of the water.

Close to Glenelg's low, white painted houses are the ruins of a Red Coat barracks, now ruined. Construction of the building was ordered after the 1715 Jacobite rebellion and a military road  linked Glenelg to the rest of General George Wade’s road network.

In 1773 Boswell and Dr Johnson, aged 63 and in poor health, came to this part of Scotland and both eventually wrote about it.  Johnson’s book was called,  Journey to the Western Islands of Scotland, and after his death Boswell published Journal of a Tour to the Hebrides. Johnson described the mountains in this area as "one of the great scenes of human existence."  At Glenelg,  "We had a lemon and a piece of bread," Johnson records, "which supplied me with my supper."

This is from Boswell’s account:
“We came on to the inn at Glenelg. There was no provender for our horses: so they were sent to grass, with a man to watch them. A maid shewed us up stairs into a room damp and dirty, with bare walls, a variety of bad smells, a coarse black greasy fir table, and forms of the same kind; and out of a wretched bed started a fellow from his sleep, like Edgar in King Lear, 'Poor Tom's a-cold'. This inn was furnished with not a single article that we could either eat or drink; but Mr Murchison, factor to the Laird of Macleod in Glenelg, sent us a bottle of rum and some sugar, with a polite message, to acquaint us, that he was very sorry that he did not hear of us till we had passed his house, otherwise he should have insisted on our sleeping there that night; and that, if he were not obliged to set out for Inverness  early next morning, he would have waited upon us. Such extraordinary attention from this gentleman, to entire strangers, deserves the most honourable commemoration.
Our bad accommodation here made me uneasy, and almost fretful. Dr Johnson was calm. I said, he was so from vanity. Johnson: 'No, sir, it is from philosophy.' It pleased me to see that the Rambler could practise so well his own lessons.” The 21st century Glenelg Inn is extremely comfortable.

All around this beautiful area ancient walls and ruined cottages can be seen, deserted since the cruel evictions of 1853, part of the infamous Highland Clearances. As you can see from the photo above there are also much earlier ruins, the two Iron Age brochs of Dun Telve and Dun Troddan, fortress-like stone fortified homesteads of Iron Age farmers. Both towers were originally 10 metres tall, round, with several floors and a winding staircase. They were probably used to keep local people safe from invaders, including the Romans. From the top of the tower a watchman could sound the alert and wave a torch so that local families could shelter there with their animals and food.  These two brochs were once linked by a tunnel. 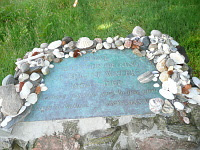 This is Sandaig, with its burn, beaches and islands, which is also near Glenelg. Gavin Maxwell, author of Ring of Bright Water, called it Camusfearna to try to hide its true location. He was devastated when the success of his book brought gawping tourists and ruined his seclusion. His small cottage was burned down in 1967 and his beloved otter, Edal, died in the fire. Maxwell’s ashes are buried here. The mystical poet Kathleen Raine, who was unrequitedly in love with Maxwell,  also lived nearby.
Between March and October you can cross to Skye on the brave community run ferry, run by two men and two enthusiastic dogs. This is where Boswell and Johnson crossed to Skye in 1773 and is far more romantic and exciting than the modern road bridge. The journey only takes about 10 minutes and as you wait for the next boat you can pass the time in the lighthouse, about the size of a sentry box. It’s no longer used but you can buy a cup of tea or a t shirt and there is a testimony to the grim determination of the TV Licensing Authority - a letter from them berating the lighthouse for not buying a TV license. On the Skye side we walked up to a viewing hide where we borrowed binoculars and watched otters, golden eagles and buzzards. 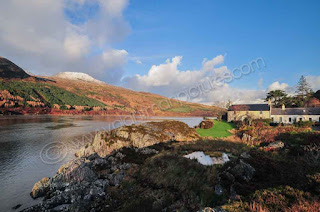 How interesting! We were there 12 years ago, but missed out on the history, so fascinating to be brought up to date. It is a stunningly beautiful part of the world.