Cova des Cuieram - A Pilgrimage of a Kind - Celia Rees

I blogged here about my first visit to the Balearic island of Ibiza. My fascination for the island hasn't left me. I knew that one visit would never be enough. This September, I went on another Yoga Retreat with my daughter, Catrin. We would have a chance to explore the island further, visit the hippy market (always a must and I missed it the first time round). 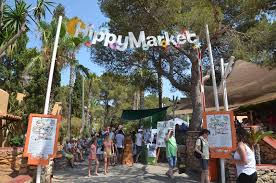 We were also determined to visit Cova des Cuieram, the cave of Tanit, Goddess of the White Island, that we'd failed to find the year before.

The  cave is near to the town of Cala San Vicente in the North East corner of the island. 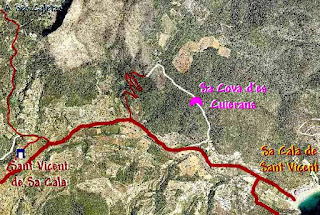 It is situated high up in the hills with commanding views down to the sea. From the 5th Century BC it was a Sanctuary to the Phoenician goddess, Tanit. Although there is little to see from the outside, it is a large underground complex of interconnected caverns, running deep into the ground.  Discovered, or re-discovered, in 1907 and excavated, the cave complex was found to contain 600 bell shaped terracotta female figures, thousands of other objects, figurines, fragments of ceramics and a plaque in in Punic to 'our lady, to Tanit the powerful....' 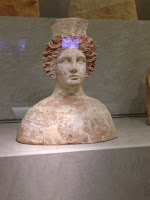 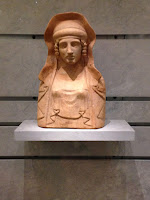 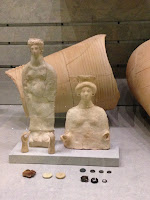 These artefacts are now on display in the Archaeological Museum in Eivissa. We did manage to visit there last year but never made it to the Sanctuary where the objects were discovered. They were votive offerings left there by those who visited the shrine, either to ask for Tanit's intercession, to give thanks, or to appease her. Not so very different from the little plaques and objects found in Catholic churches, left near statues of saints or the Virgin Mary, in thanks or asking for blessing. In Britain and Ireland people still tie notes and ribbons onto trees that grow near to sacred wells or springs. Even coins in a fountain belong to a need we've felt since ancient times to make a connection of some kind by giving and leaving something of ourselves behind.

Where I holiday in Italy, outside Siena, the Via Francigena runs practically past the door. Modern pilgrims in hiking boots, carrying backpacks and plastic water bottles still walk the centuries old way along white roads, farm tracks, main roads and dual carriageways following the ancient pilgrim route that leads to Rome.

Our visit to the Cova des Cuieram felt very like a pilgrimage. Although it is marked as a tourist attraction, it is not easily gained. It is situated off the road, high up on the side of a deep valley. The way to it is marked by the ancient sign of the Mother. 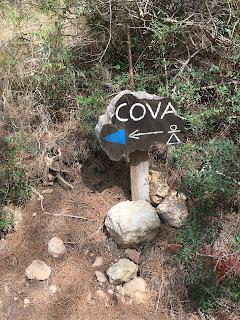 There are other, easier approaches by car but the route we took was on foot. We walked about a kilometre from the town of Cala de Sant Vicent and then followed the signs up the hill. 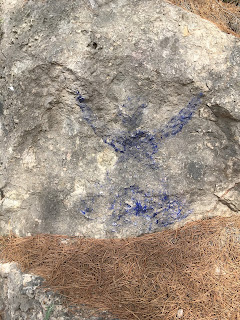 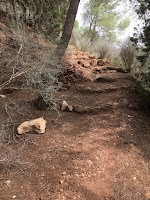 The way was steep, roughly paved and cut into the side of the slope, snaking up the hillside, it had the feel of a way that had been trodden since ancient times, taken up recently by the hippies who had colonised Ibiza in the Sixties and probably painted the fading signs of the Mother that showed the way. 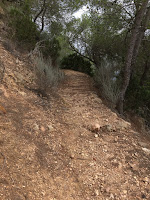 The route was hard going, especially in the heat of the day with insufficient water (my fault). Testing to the mind, body and spirit which I suppose all pilgrimages are, or should be. Not far from the top, we were about to give up, when we met a couple who shared their water and told us it really wasn't much further. A serendipitous meeting. If I was a certain kind of person, I'd say they were sent by the Goddess. At the top there was more water, a litre bottle, still cold. Maybe the Goddess left it there for us, or for other thirsty pilgrims to her shrine, or maybe Ibiza is just that kind of place. 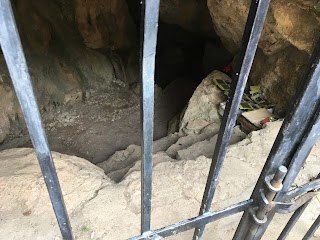 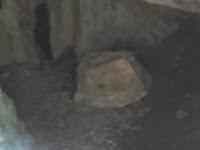 Even though the shrine was firmly barred and padlocked (despite guide book and website claims that it would be open), it was worth the hard climb. The opening to the main chamber still held its chthonic mystery, perhaps even more so, since it could not be entered, only peered into - Tanit's secrets are hard won.

Each of the barred chambers was festooned with offerings of all kinds put there by visitors: necklaces, bracelets, stones, crystals, shells, flowers, real and artificial, curling and fading photographs, ribbons, even hair bands and bobbles, as though everyone who went there felt compelled to leave something of themselves, as they had been doing in this place for thousands of years. I liked that feeling of continuity of behaviour, if not belief. 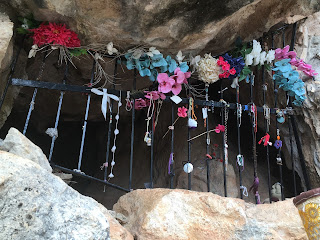 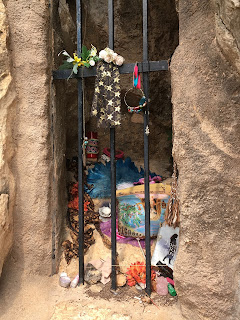 The place was high up, cooled by a constant breeze, peaceful, with just the sound of the wind in the trees. It was a good place for some quiet contemplation, gazing out over the plain and down to the sea.  We dutifully made our own offerings, lit our candles, offered our thanks and maybe our prayers and then, after a little while, we left to begin the long climb down. 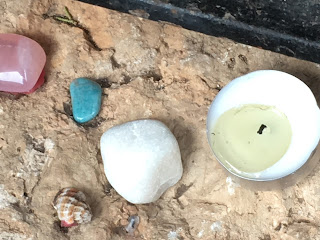 What a fascinating place, Celia! I hope it finds its way into a book.