At the end of August, Percy Bysshe Shelley spoke to me from the grave. Via Twitter. On Mary Shelley’s birthday, I’d tweeted that she’d out-gothed us all by keeping Shelley's heart after he died. 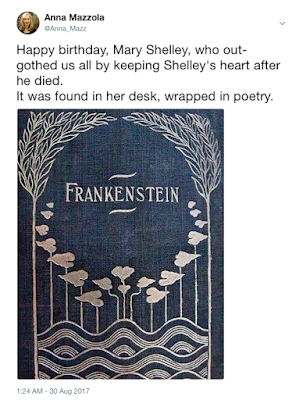 Up pops Shelley to correct me. No, he says, the heart couldn’t have survived the heat. ‘She kept something she THOUGHT was the heart.’ 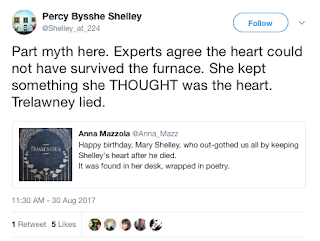 So did Mary Shelley really have the heart? If not, what on earth was it?

Firstly, it’s worth saying that keeping a physical memento of a loved one was considered pretty unremarkable in the 19th century. People frequently had locks of their dearly departed's hair (and sometimes even their teeth) made into rings, brooches and bracelets. Napolean left his heart to his wife (allegedly his physician made off with his penis). Paul Verlaine's mother kept her two miscarried foetuses preserved in jars in their home. When Dickens’ cat, Bob, died, he had his paw made into a letter opener. Nor was it uncommon for a person’s heart to be buried separately to the rest of the body. Chopin’s heart was preserved in a crystal jar (which the Nazis later stole). Thomas Hardy’s heart was cut out to be buried in his hometown of Stinsford, Dorset, but was then part-eaten by a cat.

Mary keeping her husband’s heart wouldn’t therefore have been considered quite as bizarre as it would today.

Snatched from the flames

What’s more odd is the way in which the heart was obtained. In July 1822, aged only 29, Percy drowned after his boat, Don Juan, was caught in a storm. His body and those of his two sailing companions were found 10 days later.

For complex reasons to do with burial regulations, Percy’s body had to be burnt on the beach in Viareggio where he’d been temporarily buried. His friends, Byron, the poet Leigh Hunt and Captain Edward John Trelawny, had a portable crematorium built. Percy then had to be disinterred (not a pretty job) and cremated. According to one of Trelawny’s several contradictory accounts: ‘The fire was so fierce as to produce a white heat on the iron, and to reduce its contents to grey ashes. The only portions that were not consumed were some fragments of bones, the jaw, and the skull, but what surprised us all was that the heart remained entire. In snatching this relic from the fiery furnace my hand was severely burnt.’

There was then a battle as to who should have all the bits. Trelawny gave the heart to Leigh Hunt, after he supposedly ‘begged’ for it. When Mary wrote to Hunt to ask him for it, he refused, telling her that his love for his friend negated ‘the claims of any other love’. Byron weighed in and eventually Hunt gave Mary the heart.

Most of Shelley’s remains were interred in the Protestant Cemetery in Rome, where Keats was buried. The heart, however, remained with Mary.

But could it really have been his heart? How could it have survived the heat of the fire? Some argue that his heart had calcified due to earlier tuberculosis. An 1885 New York Times article theorised that it might, in fact, have been his liver: ‘Shelley’s liver was saturated with sea water, and was on that account more than normally incombustible’.

The truth, Twitter Shelley says, is that it was probably just a bit of ‘calcified something’. Really, it could have been anything.

But I suppose the important thing is that Mary thought it was his heart, and she kept it with her throughout her life. In 1852, a year after she died, Mary’s son, Percy Florence Shelley, and his wife, Jane, opened Mary’s box-desk. Inside, they found one of Shelley’s last poems, Adonais, An Elegy on the Death of John Keats. When they unwrapped the paper, they found that it contained the remains of Percy’s heart. Or rather, what Mary thought was the remains of his heart.

In 1889, Percy Florence himself died. When he was buried, in the family vault at St Peter’s Church, Boscombe, the remains of Percy’s heart were buried too.

Not all of him is beneath ground, however. The British Library has a thick, red leather-bound volume containing Mary Shelley’s letter to Maria Gisbourne about Shelley’s death. Inlaid in the back cover are the ashes that Trelawny collected together with what are said to be fragments of Shelley’s skull. Or are they?

Thank you - I loved your piece. I have also written on Shelley's heart and its symbolism but I did not know that Hunt originally refused the heart. Fay

This is wild. I hope to see more investigations like this. Thanks for posting!

Brilliant, shared to my author page. Hardy's heart partly eaten by a cat will live with me for a while!

Thanks for your comments, all. Catherine, the sad thing is that the cat was then killed and buried alongside Hardy. Seems a bit harsh.

Im ready to see you now, heart too.