Brunel: how to 'meet with Triumph and Disaster, and treat those two imposters just the same...'* - by Sue Purkiss

I recently started volunteering on the SS Great Britain, Isambard Kingdom Brunel's famous ship, the first iron ship in the world: once a rusty hulk abandoned in the Falklands, but now a thing of beauty back in Bristol's dry dock, where she was built.

I've been interested in the Great Britain for quite some time. I even wrote a children's book set on the ship, Emily's Surprising Voyage - so I thought I knew a fair bit about it.

But in these few weeks, working with experienced volunteers who've forgotten more about engineering than I'll ever know - one captained two ships in the Royal Navy, for heaven's sake! - I've realised that actually, I know very little - either about the ship, or about the man. I'm sure I'll come back to both in future posts, but there's something in particular that has struck me as I've listened, looked, read and learned.

Brunel was in his time, and still is, famous for being as an innovative and incredibly successful engineer. His works are all around us: the Great Western Railway, the Clifton Suspension Bridge, Paddington Station, the Great Britain - and there are lots more besides, both in this country and abroad. He worked at an astonishing rate, firing off ideas, eagerly taking on challenges and responsibilities that would have daunted most people. His statues are all around us too: instantly recognisable with his cigar, his stovepipe hat, and that slightly pudgy face, he pops up all over the place. In 2002, he came second in a BBC poll to find the people's choice of the greatest Briton. 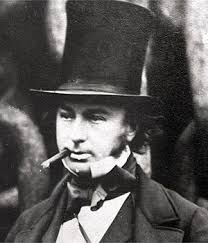 Yet as I started to  learn more about his career, I was struck not only by how successful he was - but also by how often he encountered failure.

So, famous and successful and in demand as he was, all did not go smoothly for Isambard. But what fascinates me is that when something went wrong, he didn't just put his head in his hands and sit around feeling sorry for himself. (Which, I must admit, is my default reaction.) He simply lit another cigar, sat down at his desk, and cogitated until he had figured out a solution.

Or, if a solution wasn't forthcoming or was beyond his control, he accepted reality and moved on to the next thing, and did the very best he could to make a success out of that.

And that, I think, is deeply admirable - and a very useful example to try to follow!

And he'll have learned something from every failure. We should be teaching this in schools! Great post, Sue - and I hope they stock Emily's Surprising Voyage in the gift shop!

Yes, great post -- and they really should stock 'Emily' in the gift shop.

I'm envious of you living close enough to be able to volunteer at the Great Britain. I've been twice-- once with my partner and then, because I enjoyed it so much, with my brother who's a big Brunel fan. We had a whale of a time -- particuarly enjoyed triggering the rat and cat in the ship's galley.

Brunel certainly seems to have been jinxed; but he had the persistence and obstinacy of a bull-dozer. When, at the museum, I watched the video of his lost ship, the Great Britain being towed home and passing under his completed bridge, I found myself unexpectedly moved

Excellent post, Sue! It's impossible to overstate the case for persistence and perseverance in the face of setbacks, and Brunel is an excellent example of the success that can follow. (Shame about the broad gauge railway though - we can only speculate on how well that could have worked!)

Thanks, all - yes, Sue, that video always brings a tear to my eye as the old shop comes slowly up the river, back to the place where it all started!

Oh I really must get there to see it - and the shop should certainly stock your book!

Thank you for a post that brings together Brunel's real and admirable strengths.