LET THERE BE LIGHT by Elizabeth Chadwick

It's a couple of days past the Solstice as I'm writing this post.  Where I live in the UK, the sun will rise at 4.40am and set at 9.35pm tonight although it won't be fully dark until around 10.45pm.  That's gettting on for 18 hours of daylight.  But at the other end of the equation in December, the dawn arrives circa 8am and sunset is before 4pm, giving us only 8 hours of daylight, and if the weather is murky, that time is swiftly curtailed.
I was thinking about this the other day and it led me to ponder upon the kind of lighting medieval people had at their disposal.  Eight hundred years ago, how would I have lit my hours of darkness?

Since all cooking and heating relied on fires, ambient firelight would have provided a certain amount of light, but with dim parameters and not always useful. One of the reasons main meals were eaten early in the day in the Middle Ages was that trying to perform tasks in a kitchen without clear light was a hazard. Certainly in a castle kitchen there might be fires for heating water and cooking food, but the fire was at ground level and any preparation would have to be done on tables which would be cast into shadow, so in itself firelight, while providing warmth and cheer was only of background usefulness. Actually for kitchen work in dark circumstances, the most often used lighting appears to have been something called a cresset. This was a series of hollows in a stone block. 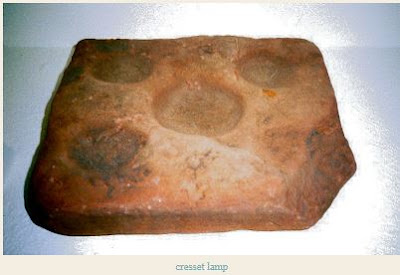 The hollows would be filled with oil or fat and a wick floated in them. The lamps would be placed on a flat surface or in a niche. There are frequent references to cresset lamps as items of kitchen equipment. Candles and candlesticks seem not to have been as popular in a kitchen environment  but to have been used elsewhere.
Bartholomew the Englishman was of the opinion that there should be plenty of light from candles, prickets and torches when people were eating 'for it is a shame to sup in darkness and perilous also for flies and other filth.' I am reminded of my father-in-law on active service in North Africa in 1942. He said he always waited until after dark to eat his rations because then he wouldn't see the weevils!
For the present household and the less well off, lighting was provided by tallow candles and by rush lights. These were frequently home-made in the summer months by carefully peeling the long cylindrical pith of the juncus rush, and dragging it through molten animal fat. These, however, burned down quickly and could not be used for any length of time. They were better than nothing, but not ideal. People make use of local resources, and some communities living near the sea would make lamps out of a fish called a thornback. The fish was stuffed full of linen waste, compressed until the wick was saturated, and then actually burned as a candle. Two or three tied together in an iron holder made a torch. The phosphorescent light cast by rotting fish was sometimes used to light the way up the garden path...
The aristocracy and the church opted for candles made from beeswax. These gave a clear burning light and a pleasant smell and were long-lasting. Although beeswax was locally available, there was never enough to satisfy demand in the big cities, and supplies were augmented from the forested less sparsely populated areas of Europe, such as Russia, Hungary and Bohemia. People in royal service were entitled to candles or remnants of them as one of the perks of their job. If John Marshal my hero of A Place Beyond Courage was eating outside the court he was entitled to a daily provision of one small wax candle and 24 candle ends. Royalty only burned fresh candles, and whatever stubs remained at the end of each day were cleared away and finished off in the departments of the household officials. If John was working in-house on a particular day he was entitled to an ample supply of candles all the time. John's ushers were entitled to 8 candle ends a day for their own use. Candles could be placed in candlesticks, wall mounted holders, ceiling suspended holders, or arranged on large multi-holder candle stands – whatever suited the purpose. Ceramic lamps were another form of lighting. These look a bit like ice cream cones and are ubiquitous in medieval illustrations. They are frequently found in museum exhibits. Basically, they worked on the same principle as the cresset lamp and were often suspended by chains from the ceiling. There are references in the pipe rolls to the use of oil lamps. Queen Eleanor had 30 shillings and five pence worth of oil bought on the Surrey account to use in her lamps in 1176/1177. 'Et pro oleo ad lampadem regine xxxs, et v.d.' In 1159 that sum was greater but only by two pence. The second sum appears time and again throughout the reigns of Richard I and of John while she was still living. Were they for religious or personal use? The pipe rolls don't say.
When one needed to carry a light about, lanterns proved useful, and there are many surviving examples in the archaeological and illustrative record.
Torches were also used. But we don't know a great deal about them as they have not survived well in the archaeological record and it's an area that still requires more study.

During the broad spread of the middle ages and in various circumstances, there were rules about lighting. George Duke of Clarence's household ordinances for December 1468 gives the detail that wood and candles should only be issued between 1 November and Good Friday at the rate of two shides (unit of measure - I don't know its meaning)  and three white tallow candles to be shared between every two gentlemen of the household. At the monastery of Barnwell, the monks were forbidden to sit by a lamp in the dormitory to read, or to take candles to bed in order to do the same. We might think it was because of the fire hazard but no, it was because reading in bed was discouraged as at that time, reading aloud was the norm and would have kept everyone else awake, not to mention the disturbance of light.

So basically it wasn't a world without light, but it was certainly one more deeply shadowed, more golden, more smokily scented (among other smells!) than ours. It could not be had for the flick of a switch but provision of light had to thought about and toiled over. What you never have you never miss, but 1000 years ago, the return of daylight as the northern hemisphere turned toward spring must have been a truly keen pleasure of life.

Sources used in this article.

Food in England by Dorothy Hartley published by Little, Brown.

Constitutio Domus Regis: The establishment of the Royal Household edited and translated by the late Charles Johnson. Oxford Medieval Texts.

Thanks for the fascinating post! Our ancestors had to do a lot of complicated things in daily life. In Poul Anderson’s The High Crusade, a mediaeval village is invaded by an alien spaceship. After wiping out their attackers, they soon find out how to use the spaceship because it’s so much simpler than what they had to do at home - switches, etc. I imagine our ancestors would love modern electricity!

This is so interesting, Elizabeth. I just read a description by Goethe of visiting the Capitoline Museum in Rome by torchlight. The flickering light brought the statues to life, each isolated in its pool of brilliance so that you had to focus on it very intensely.