The Great Mallard Chase (or, another example of Oxford eccentricity)

On the night of January 14, 2001, some of Oxford's most learned fellows could be seen marching around All Souls College behind a wooden duck held aloft on a pole. They were engaged in the bizarre ritual of "hunting the mallard" that occurs once every 100 years at the College. I was up at Oxford at the time, and one of my tutors was present and so I got the eye-witness account of the matter.

After a commemorative feast the fellows paraded around the College with flaming torches, singing the Mallard Song and led by “Lord Mallard” carried in a sedan chair. They were in search of a legendary mallard that supposedly flew out of the foundations of the college when it was being built.

And so, during the hunt the Lord Mallard is preceded by a man bearing a pole to which a mallard is tied. Originally it was a live bird, by 1901 it had become a dead bird, and by 2001 it was a bird carved from wood. The last mallard ceremony was in 2001 and the next will be held in 2101.
In 1632 the archbishop of Canterbury chastised the fellows for drunken rioting at the feast.

The ceremony supposedly dates back to 1437, when the foundations of The College of All Souls of the Faithful Departed of Oxford (now known as All Souls College) were being dug.

The college’s founder, Henry Clichele, Archbishop of Canterbury, was trying to decide where to put his new building and in a dream he was told that if he built it in the High Street, next to the church, when he dug the foundations he would find: “…a schwoppinge mallarde imprisoned in the sinke or sewere, wele yfattened and almost ybosten. Sure token of the thrivaunce of his future college.”

He dug where directed and heard: “horrid strugglinges and flutteringes”. He said a few prayers, reached into the hole and pulled out a duck the size of: “a bustarde or an ostridge.” The bird flew away and the Fellows of All Souls chased it around the college. They caught it and ate it.

A document detailing the event appeared in 1750, and was supposedly based on an original fifteenth century manuscript. 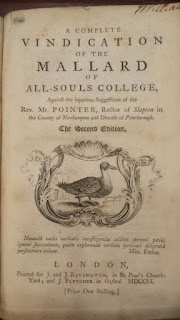 The mallard is the symbol for All Souls, and the Mallard Song (reproduced at the end of this piece) is the College song. Which is all very cute until you realise that All Souls is the most dignified of all the Oxford Colleges, as it only admits fellows. There are no rowdy, noisy undergraduates such as one would expect to bellow out the Mallard Song and engage in high jinks.

All Souls loves its Mallard and the bird appears all over the College: there is a model of the duck in most common rooms, the ornate 19th century chairs in the Hall are carved with the college crest and a Mallard, there is a Mallard-shaped telephone near the Library, and there is a splendid and very accurately painted plaster Mallard drake on the wall of Hawksmoor’s college Buttery, which came from a Gothic pavilion built in the garden in 1753.

My tutor gave us the insider's view of the Great Mallard Chase of 2001. She and the other Fellows partook of a 14 course dinner in the medieval Codrington Library, accompanied by superb wines (All Souls has the best cellar in the country - better than Buckingham Palace). I have reprinted the menu from 1901 below. Dr Martin Litchfield West as the Lord Mallard, and the Fellows sang, much as they have done for hundreds of years, the Mallard Song. The Victorians disapproved of the reference in the song to the Mallard’s “swapping tool of Generation”, mightier than any other in “ye winged Nation” (of birds) and dropped this verse from the song. It was restored in the 2001 ceremony, when the Fellows sat down to the Mallard Centennial Dinner, which did include a duck.


When everyone was in an excess of good spirits, four of the younger fellows hoisted the Lord Mallard up in his special sedan chair (the same one used in 1901 - but we're not sure if it was also used in 1801) and they chased a wooden mallard duck around the quad. In the days before Animal Rights (a very serious consideration in Oxford, given letter bombs to scientists and sabotage of laboratories), they chased a real duck. But this century, for the first time, a fake duck had to do. So, with the Lord Mallard hoisted high in his sedan chair the whole congregation of fellows chased this wood duck around the quadrangle bellowing out the Mallard Song.

Now, given that he was not expending any energy and was the centre of attention, the Lord Mallard was anxious to repeat the experience. "Again, again" he cried, and he was carried around the quadrangle again, and then for a third time at his excited urging. But, when he said "Again", wanting a fourth perambulation, the poor sedan carriers rebelled and dumped him on the ground. Then there were wonderful fireworks, including fireworks in the shape of a mallard.

What should be remembered is that All Souls College has no undergraduates and its fellows are considered to be among the finest minds in the world. Lord Mallard in 2001, who lead the midnight procession, carried high on a sedan chair, was Dr Martin West, one of the greatest classicists of his generation.
The Mallard Song (reproduced from the All Souls website: http://www.all-souls.ox.ac.uk/ )

This is the text as reconstructed from the older copies:

Some storys strange are told I trow
By Baker, Holinshead & Stow
Of Cocks & Bulls, & other queire things
That happen'd in ye Reignes of theire Kings.
Hough the bloud, &c.

The Romans once admir'd a gander
More than they did theire best Commander,
Because hee saved, if some don't foolle us,
The place named from ye Scull of Tolus.
Ho the bloud, &c.

The Poets fain'd Jove turn'd a Swan,
But lett them prove it if they can.
To mak't appeare it's not attall hard:
Hee was a swapping, swapping mallard.
Ho the bloud, &c.

Then lett us drink and dance a Galliard
in ye Remembrance of ye Mallard,
And as ye Mallard doth in Poole,
Lett's dabble, dive & duck in Boule.
Ho the bloud, &c.

The second verse, which refers to English chroniclers of the sixteenth and early seventeenth centuries, was discarded in 1752, and the fifth was expunged on grounds of decency in 1821. The original verses were restored for the new millennium. No one knows which King Edward is referred to, or why.

Email ThisBlogThis!Share to TwitterShare to FacebookShare to Pinterest
Labels: All Souls College, Hunting the Mallard, Oxford