A few years ago, we bought a house with a beautiful, large and overgrown garden. I had never lived in a house before, let alone had a garden. How hard can it be, I thought, to look after such a lovely thing? Ha Ha Ha.

At the end of our garden is a railway line, which houses businesses in the arches beneath the train tracks. Beyond our bank fence, a long-bankrupt business had left a rubbish dump. Metres high mounts of rubble and discarded plaster and broken odds-and-sods. Beneath the rubble lurked foxes and worse.

Network Rail agreed to clear the site, and I watched, grumpily as they took down my back fence to get at the horrors behind. But as the workmen began to clear things away, they uncovered some filthy, treasure. It turns out that the bankrupt business had been a theatre-set designer. Hiding back there were some extraordinary fibre-glass moulds from something ancient. The workmen thought I was mad, as I climbed over the rubbish pile pointing to things I wanted to keep - that and that and that!

Here are some of them.. 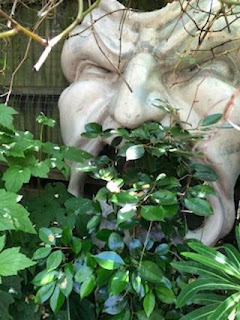 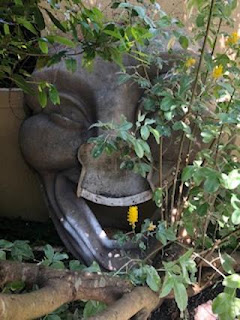 For scale, these tragic masks are about the same height as me - 5ft 6 ish, and much wider. There were fibreglass columns and vases, and a lifesize horse which my neighbour bagsied, much to his wife's horror. And two, gorgeous moulds for art-deco style doors: 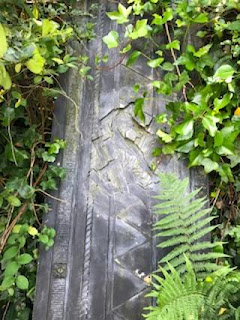 These, I have convinced myself, are the doors King Creon shuts in the face of his recalcitrant niece, Antigone.

The treasures joined the weeds and ivy in my garden, at the same time as I started to research my work-in-progress - the story of the exiled Julia, daughter of Augustus. We visited Pandateria, and saw the ruins of her villa, a luxury, holiday pad complete with extensive gardens. (In the same trip, we visited Hadrian's villa at Tivoli, and the incredible gardens of the Villa D'Este inspired by its ancient predecessor)

So over the past two years, I have been spending some of my research time on Roman gardens at the same time as trying to become a gardener, watched over by my fearsome masks.

The Romans loved their gardens. They feature in the literature from Virgil to Pliny. My favourite poem about gardens is in Horace's odes. We seem to catch him, in the very moment, stretching out in the shade and reaching for his cup. Which of us has not been Horace, this glorious summer? This version is a translation by Gerard Manly Hopkins, himself no slouch on describing the exact, quiet joy that nature inspires:


Ah Child, no Persian-perfect art!
Crowns composite and braided bast
They tease me. Never know the part
Where roses linger last.
Bring natural myrtle, and have done:
Myrtle will suit your place and mine:
And set the glasses from the sun
Beneath the tackled vine
According to Linda Farrar's wonderful book, Ancient Roman Gardens, the Romans knew of about 475 plants in the first century AD, including wild plants. Our evidence is partly archaeological - Pompeii was a city of gardens, and the descending ash has carbonised ancient plant material in site. Gardens were extensively represented in frescoes.

Commonly represented shrubs include laurel, myrtle, oleander and vibernum. In terms of decorative plants, the Romans loved roses, sacred to Venus. Lilies were acclaimed for their purity and perfume. Only the chaste could pick irises, according to Pliny. Periwinkles, poppies, chrysanthemums and daisies are visible in frescoes. Columella, the agricultural writer, talks of beds dedicated to violets.

With the Romans in mind, I replanted one border last year with roses, underplanted with lavender and rosemary. Rosemary was loved by Pliny, and was associated with love and death - couples wore sprigs at their weddings and corpses carried rosemary on their journey to the underworld. In the Autumn, I'm going to go even more Roman, and put in some lilies and irises.

I have one bed in a sunny spot which has become raddled with age and weeds. My plan is to rip up the existing plants over this winter and replant the bed on Ancient Roman principals. Roman shrubs and flowers, watched over by my masks. I just hope they have some ancient slug repelling magic woven into the fibreglass.
Posted by Unknown at 06:00

Your garden will be magical!

What a great opPortunity! ENJOY

Masks were popular in Roman gardens as apotropaic devices to ward off evil spirits (and fruit eating birds, too, I suspect.) :-o

Deep dishes full of cheep beer. slugs love beer but can't swim. plants love beer too and will do their thing with the corps. Your garden will be lovely! Now, I wonder, if I can find discarded theater props here?