The Longest Castle in Europe by Leslie Wilson 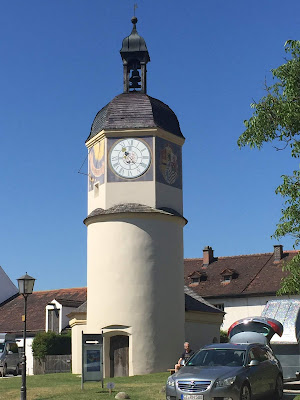 Burghausen, in Lower Bavaria, is officially, according to the Guinness Book of Records, Europe's longest, at  1,051.02 metres, ie, well over a kilometre, so walking the length of it would count as a reasonable constitutional, particularly after the steep climb up to the ramparts. As one of the largest intact medieval castles in the world, it dominates the eponymous (and very attractive) town. From 1255 onwards, it was the second seat of the Dukes of Lower Bavaria. We stayed in the town in July last year, in sizzling heat, in the old Post hotel, which backs onto the castle rock, and our room had a view of the castle. This is not meant to be a discursive piece, rather (since it's getting into summer holiday time again) a stroll through the castle. If you want a panorama of the whole thing, look on wikipedia. 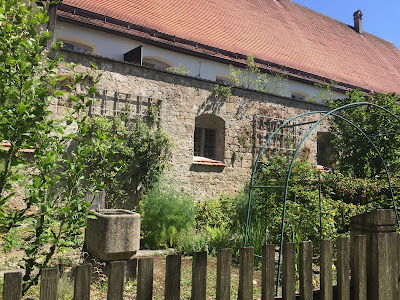 This very pretty garden is set on the exterior of the old gaol, part of which is called the 'Hexenturm' or 'witch tower.' I was hoping to get images to illustrate a piece about the great witch hunt, but in fact Burghausen was not one of the great witch-burning centres of Lower Bavaria. The 'witch tower' was simply the place where women were shut up. I believe the name was attached to it later, and you can make what you want of that connection, and why it was so named.
Next to the 'witch tower' is the 'torture tower' or 'Folterturm,' and that is definitely the right appellation. I'm not putting up photos of the instruments of torture, but there are still racks, scolds' bridles, Iron Maidens, and other horrible things on view in the museum here. It's a dreadful thought that torture is still very much a part of our modern world. However, here is the sign for the Folterturm museum. For the benefit of non-German speakers, the sign also tells you how to get to the snack bar and the entrance to the torture tower is through the souvenir shop. There is something slightly gruesome about this, I feel, torture as entertainment. Well, you get it at the Tower of London, too. 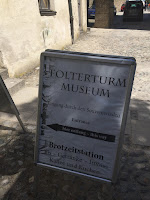 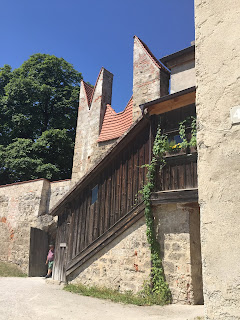 Moving further along, you get to more cheerful parts of the castle; of course the Dukes wouldn't have wanted their dinner disturbed by screams, though no doubt they had no squeamishness about strolling along to visit an execution or even a bout of torture. Perhaps my scruples about torture as entertainment nowadays are over-sensitive, after all. 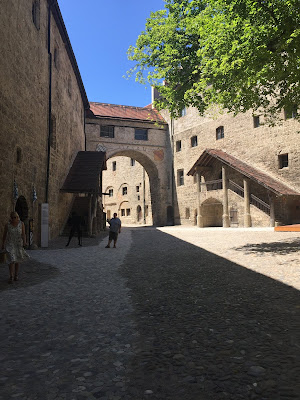 Here are the ducal quarters; unsurprisingly, the castle is in great demand for film locations. 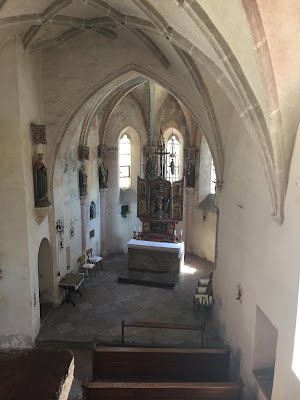 What I liked best about the castle was this chapel, a little medieval gem. Interestingly, just as in England, medieval wall paintings were being rediscovered, which are just visible, I think, if you click on the picture. In England the disappearance of such frescos is usually blamed on the white-hot frenzy of religious reformers, and I commented on this to the room steward. Her response was: 'I believe they just went out of fashion.' Perhaps the fashion was less religiously motivated than the painting over of frescos in England, but it seems that might have happened even without the Reformation. 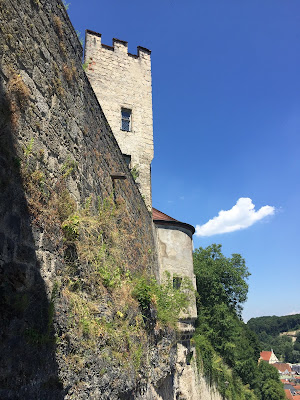 Walking down another steep path along the ramparts to go back to the town for lunch, we heard goats bleating, yet they were, frustratingly, never visible, . You could hear them from our bedroom, too. They are organic goats who are kept on the steep slopes because they eat tree and shrub seedlings, which, if they grew up, might destroy the structure of the castle mound. They move indoors for the winter. 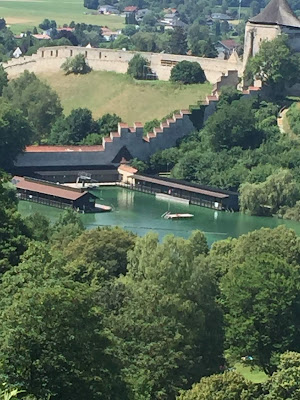 The other thing I liked best about the castle was the old moat, part of which has become a swimming area. Particularly welcome when the temperature is over 30; it's so lovely to be able to swim among moorhens and ducks, to turn over on your back and enjoy the view of the longest castle high above you. As you can see from the photograph, the lido is among the outer ramparts, and you go through a curtain wall to get to them (there's a lovely garden, too).