The Market for Historical Fiction by Imogen Robertson

So this is a question for all the writers, agents and publishers out there. What is the state of the market for Historical Fiction at the moment?

I do some reading for The Literary Consultancy when my own deadlines allow, and it’s a question I’m often asked. If I think the manuscript I’ve read is of publishable quality, I’ll say so, but that’s different to saying it will be published. And as to money? Might be two thousand, might be twenty, might be fifty, or one hundred thousand. Or one point five million.

Yes, that just happened. And that’s for a book about a book too (the writing and publishing of Dr Zhivago, We Were Never Here by Lara Prescott). I‘ve chatted to two publishers in the last year who said that writers writing about writing is a terrible idea. I have nodded sagely when they said it too. See, nobody know anything. That phrase by the way is the mantra repeated through William Goldman’s ‘Adventures in the Screen Trade’, which is brilliant and painful in equal measure.

I can say with certainty that there is plenty of excellent, crime, adventure, and literary historical fiction being published. Big names such as Wilbur Smith (full disclosure - I’ve been co-writing with Mr Smith), Alison Weir and Robert Harris, literary luminaries like Julian Barnes and Alan Hollinghurst, master warmongers like Harry Sidebottom and Ben Kane, crime lords - S.D. Sykes, Rory Clements, stonking debuts - Stuart Turton, Imogen Hermes Gower and the consistently excellent Antonia Senior, Katherine Clements, Abir Mukherjee. And many, many more. So the talent is there and the publishers are making sure new books arrive on the shelves every week. An army of book bloggers support and promote the love of fiction and audio book sales are shooting up. So that’s all good.

I’ve also spent time with various writers sobbing into our pints about advances cut to the bone, shrinking foreign markets and the drop off in the sales of hardbacks. We’re not so much a literary elite, I’m afraid, as Del Boys on the 21st century Grub Street, trying to find alternative ways of making a living, publishing our work and fiercely staking out time to write the stories we want to write, all in the hopes that the next project we spend our blood and treasure on will be the one that breaks through and earns big, big enough to give us a chance to sit back and do more writing rather than ducking and diving. ‘This time next year, Rodney…’

We would all like to be able to spot trends and know in advance if a particular book is going to be a massive bestseller. (Ideally, before we write it). But in the end sales are in the lap of the Gods. And yes, I know, marketing spend and being named a lead title can be a huge boost, but we all know a superb book can fail to find readers even when a publisher blows the budget on it. We also know another book, universally rejected, can suddenly find a champion and snowball into a huge success. An author whose last book broke sales records sees the next one limp out into the daylight and then retreat, unremarked. It’s the cover, the subject, Brexit, the TV deal, the lack of a TV deal. We can always find reasons for the success or failure of any book after the fact. And we know (now) the moment everyone is in the pub saying that historical fiction is an impossible sell right now, and for God sake, don’t write about writers, is the moment someone lands a 1.5 million deal for doing just that. Nobody knows anything. 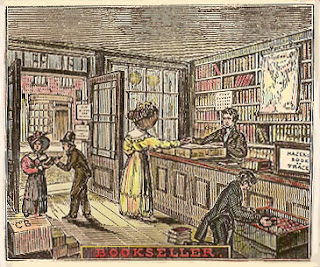 BUT
Rules are made to be broken, even the ‘nobody knows anything’ rule. I do believe no writer or publisher ever found fresh markets without being bold about what they write and publish. That doesn’t mean you have to live on soup in a bothy until your masterwork is complete, or hire the Natural History Museum for a launch party and buy advertising space on the side of a bus. It means we need to keep finding stories, places and times which ignite our passions and encourage new writers to do the same.

So this is what I'm saying to myself and anyone else who wants to listen at the moment: Be bloody minded. Don’t try and chase a market, write the story you can’t let go off even if it goes against the current shibboleths, and find a way to pay the mortgage round the edges if you have to. Be wise about your money on the occasions it does turn up.

Like, I spend my PLR income on negronis, but I think that is wise.

So I think the market for historical fiction is… there. That’s probably all we can ever say to anyone, and it might have to be good enough.

An excellent summation, Imogen. I still think there is massive interest in historical fiction but many folk get it from TV. Producers like publishers tend to follow trends - "what sells"- but I agree with you that writers have to write stories they believe in rather than follow the apparently popular topics.

But you’re right, in the end you just have to do what is important to you, and hope it will be important to readers too.

Thanks, folks.
I think while we need to be aware of what the market seems to like in broad strokes, we need to go with our gut in the end!

Thanks for that Imogen. I think you hit the nail on the head. I agree with Sue as well. Alternate historical fiction is my wheelhouse because it allows me to show how one event in the right place, at the right time, could have led to a better outcome in our world today.

Cheers, David. Yes, agree with you and Sue. I do think alternative history is a great way to look at the history which did take place, just as historical fiction is a very interesting way to look at now