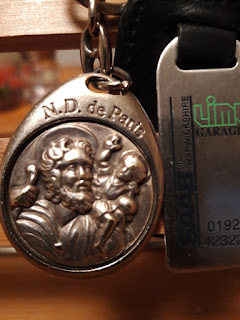 I am following Penny Dolan and posting about Notre Dame. Like Penny and million of others, I had visited Notre Dame. I was with my husband and he bought a key fob that is still on the car keys. We aren't particularly religious but, the pull is still there, to take something of the place, carry a talisman for protection. A building like this holds huge significance, whether you are Catholic, Protestant, or of no religion at all. So we watched in horror, like millions of others, as catastrophic and seemingly unstoppable fire tore through Notre Dame. We were one with the people of Paris, watching hands on mouths, faces wet with tears, as the flames rose above the great medieval structure and we woke the next morning not knowing how much of the magnificent building would be left.

By a miracle (I don't use the word lightly) although the roof was gone and the spire fallen, the hundreds of brave firefighters had prevented the fire from consuming the cathedral's main structure and the iconic twin bell towers still stood.

Although much of the interior was damaged, a human chain had rescued many of the cathedral's irreplaceable treasures. The Crown of Thrones, one of Christendom's most sacred relics, and the tunic of Louis IX, who brought the relic to France, were saved, along with gilded candlesticks, artworks and many other precious objects. They are now safely stored in Paris City Hall. It is hoped that some, at least, of the wonderful stained glass windows might also have survived. Although it seemed impossible at the height of the blaze on Monday night, Le Monde reports that although some of the windows exploded because of the heat, "the large Rose du Midi overlooking the Seine, a masterpiece of the 13th century, seems to have been preserved".

It is too early to know what caused this to happen, even to assess the true extent of the damage, but this dreadful tragedy seems to have brought the French people together. Political squabbles have been forgotten, vestes jaunes protests put aside. Already hundreds of millions of euros have been pledge for the re-building.

I was reminded of the past destruction of other great churches and cathedrals. St. Nikolai Kirche in Hamburg, destroyed in the firestorm of July, 1943. Marien Kirche in Lübeck, severely damaged in an RAF raid on Palm Sunday, 1942 and Coventry Cathedral left a roofless ruin by the Coventry Blitz.


Marien Kirche has been re-built. A new Cathedral stands next to the ruins of the old in Coventry. A new St. Nikolai Kirche was built in the district of Harvestehude; the old church left as a memorial to the immense destruction, loss of life and property caused by the Hamburg firestorm. There are messages of hope here. Even after near complete destruction, re-building and renewal are possible.

After all the photographs and footage of the destruction of Notre Dame, the most powerful image came the morning after as a shaft of sunlight illuminated the cross still standing on the Cathedral's altar. I was reminded of the burnt cross in Coventry, made from two charred beams found crossed on the floor of the cathedral the day after the raid. In this Holy Week, could there be a more potent message of indestructible faith?

Hi Celia - it seems like Notre Dame will be rebuilt, as far as possible ... and they've got the 3D images - obviously only available in recent years. Yes the shot of the cross in the shaft of sunlight tells its story. I haven't been to Coventry and really should go ... St Paul's was also bombed - then almost getting away with it ...

Thanks for your reminiscences - desperately sad, but thankfully not as bad as could be ... all the best - Hilary

Norte Dame reminds us just how fragile even the most massive buildings are and how we need to guard and protect them from all kinds of harm.