Blood on the Stone by Jake Lynch

Our guest for March is one of our rare "History Boys," Jake Lynch.

This is what Jake says of himself:

Jake Lynch is Associate Professor of Peace and Conflict Studies at the University of Sydney, and the author of seven books and over 50 refereed articles and book chapters. Over 20 years, he has pioneered both research and practice in the field of Peace Journalism, for which he was recognised with the 2017 Luxembourg Peace Prize, awarded by the Schengen Peace Foundation. He has held Fellowships at the Universities of Johannesburg, Bristol and Cardiff, where he read English Literature and got a Diploma in Journalism Studies. His PhD was from City University, London. Before taking up an academic post, Jake enjoyed a successful career in journalism, with spells as a Political Correspondent for Sky News at Westminster and the Sydney correspondent for the Independent newspaper, culminating in a role as a presenter (anchor) for BBC World Television News. Jake divides his time between Australia and Oxford, where he performs in amateur dramatic productions and runs a local book group. He is married with a teenaged son.

From fact to fiction


From Boar’s Hill, the poet Matthew Arnold gazed down on Oxford – a prospect that inspired his poem, Thyrsis, with its famous image of “that sweet city with her dreaming spires.” The land was acquired in the first ever purchase by the Oxford Preservation Trust, to ensure the view could never be built out. The final components of Arnold’s skyline were the Georgian Radcliffe Camera, built to house a collection of scientific books, and Tom Tower, designed by Sir Christopher Wren and erected on the St Aldate’s side of Christ Church College, beginning in 1681.

Its transfer from blueprint to physical shape was, therefore, in the planning stage when King Charles II brought the English Parliament to Oxford, earlier in that same year. By then, however, the city’s masons were running short of the limestone whose distinctive pallor imparts the “fugitive and gracious light” celebrated in Arnold’s verse. Headington quarry was all but worked out. Intrigues over building material were a notorious source of local disputes. And they take an imaginative turn to enter the plot of Blood on the Stone, my fiction debut: an historical mystery thriller just published by Unbound Books.

The hero is Luke Sandys, Chief Officer of the Oxford Bailiffs, and the nearest equivalent in the period to a modern-day detective. At the behest of Bishop John Fell, the Dean of Christ Church who commissioned Wren’s Gothic masterpiece, Luke and his deputy, Robshaw, agree to escort a gang of workmen to the ruins of Osney Abbey. From there, Fell hopes to recycle stone from the old walls and cloisters. Their visit is interrupted by Robshaw’s encounter with a ghost. So he believes, anyway – but, as he is suffering a bout of marsh fever at the time, Luke is sceptical.

To choose Oxford as the setting for a novel is to enjoy opportunities for lyrical description – and for on-foot research in areas of the city that have scarcely changed in many centuries. Looking down from horseback on the way across Osney Meadow, Luke notices the snake’s heads, Oxford’s signature flowers, “turning their gorgeously purpled gaze demurely downwards.” The blooms can still be seen today, at this time of year (the picture is from the Thames at Iffley). 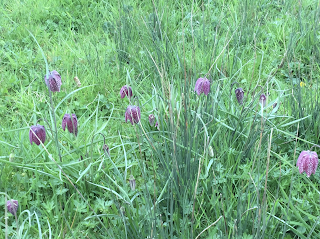 In another passage, I try my hand at emulating the many writers who have adapted Arnold’s image and made it their own. From the opening of Chapter One: “It had been one of those Oxford mornings when mist seems to percolate from domes and spires, as if they had been dreamed into existence overnight, and were about to fade away.” I snapped the Bodleian library, with the Sheldonian theatre behind it, in conditions of typical honey-tinged haze. 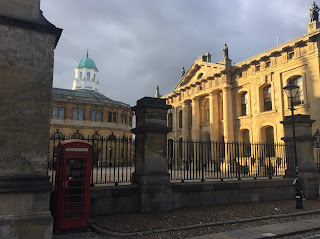 The Oxford novelist also takes on significant pressures of reader expectation. Never mind Victorian poets – there are plenty more recent literary giants on whose shoulders one is aware of standing. The best-known tradition is, of course, high fantasy – with the outstanding Philip Pullman picking up where the ‘Inklings’, Tolkien and CS Lewis, left off. Then, undergraduate days have inspired such classics as Gaudy Night and Brideshead Revisited. Following Colin Dexter’s Inspector Morse novels is a rich array of gritty, modern-day detective stories. Oddly, though, for a place so steeped in its own sense of history, there are relatively few historical novels: Iain Pears’ clever An Instance of the Fingerpost being an exception that proves the rule.

At any rate, the deep reservoir of local knowledge among the city’s inhabitants underscores the duty to accuracy. There would be no shortage of readers to correct the erring writer! One may take the occasional liberty with the historical record, but only insofar as the ‘feel’ is right. “The past is not dead ground”, Hilary Mantel observed, in a BBC Reith Lecture some years ago; “and to traverse it is not a sterile exercise… the past changes every time we retell it.” The political tensions building as MPs gathered in Oxford in 1681 were real enough, even though my murder victim, William Harbord MP – leader of an extremist group agitating for a ‘crackdown’ on Catholics – quit the city, in real life, with body and soul still together.

John Radcliffe, whose bequest funded the Camera, only actually qualified as a doctor a year after the events of Blood on the Stone, but to have him treating patients, and for that to play a part in the plot, was irresistible – especially given his enduring renown in Oxford, where the local hospital is also named after him. And I don’t actually know whether stone from Osney Abbey ended up in Tom Tower, but it must have gone somewhere: the ruins shrank from the still-substantial structure of the seventeenth century, depicted on the book’s cover, to the single surviving wall of today.

I only just pulled back from the brink of committing some potentially embarrassing mistakes to print. These included anachronistic words. Seeking a metaphor to convey the dangerous qualities, at the time, of non-conformist religious ideas, I described a book on Luke’s office shelf as “theological cordite” – only to realise, just in time, that cordite was not invented until the nineteenth century. There were a few like that. And my blessed editor at Unbound spotted that I was sending the King to watch a performance, at the Sheldonian Theatre, of Christopher Marlowe’s bloodthirsty Tamburlaine the Great: a production so incendiary that it would never pass the censor. In actuality, the court was treated to a bowdlerised version, Tamerlane the Great, by the justly-forgotten Charles Saunders, instead.

In Blood on the Stone, Luke and Robshaw must solve Harbord’s murder before it can be used to ratchet up the sectarian fury of the mob. They must rely on evidence, logical deduction and due process. For those to be set against the bombast of powerful interests, fomenting and exploiting divisions for political gain, is a pattern of many historical detective novels – and, perhaps, one that is of enduring importance in other contexts, in our own time as well. 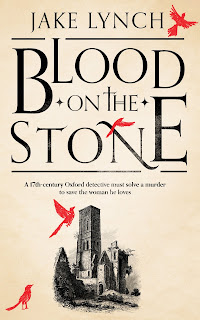 Happy to answer any questions on here... or indeed to arrange to visit book groups to discuss Blood on the Stone! There's a contact form on my website:
www.jakelynch.co.uk