Beaches and Bombers - by Ruth Downie

Pages of the Sea was a chain of gatherings on beaches across the UK to commemorate the end of the First World War. This summer we’ll see more events on Saunton Sands: this time to honour the soldiers who trained there for the D-Day landings seventy-five years ago.

All this is distant history for my generation, but to my grandparents the First World War was a living memory. The Second World War was a formative part of my parents’ childhood, and it affected them in ways that were impossible to predict.

In 1939 my father was 12 years old, and living in Ilfracombe, a small town just along the coast from the beach in the photo. Sifting through typescript of his unedited memoirs, I came across his account of the chaotic early days of the war, and the unexpected effect they had on his family’s fortunes:

"The day war was declared… all our plans were thwarted, for the air raid siren sounded shortly afterwards, and remembering Stanley Baldwin’s dictum that 'The bomber will always get through' we made our way down to what was then regarded as the safest place in the house - the coal cellar under the stairs. Remember this was early September; we obviously had not bought in the winter coal supply.

"Father was a Sergeant in the local Special Constabulary and so donned his uniform replete with steel helmet, and went off on duty. Mother prayed with us for his safety, and with gas masks at the ready, we awaited a visit from the mighty Luftwaffe.

"Now, of course, it all seems ridiculous. It transpired that the sirens had sounded everywhere (we were all going to get bombed at the same time!). Ridiculous now, but assuredly not then. The whole nation was on tenterhooks, and the authorities were too. It later turned out that a lone aircraft was detected coming into Croydon airport (or ‘aerodrome’ as they were known then) bringing some French military people to London for a conference. Nerves were taut, and off went the sirens. As for us, in obedience to orders, thereafter we kept a stirrup pump and buckets of sand and water in the hall to deal with incendiary bombs. Thus ended our first experience of the war.

"The little town of Ilfracombe changed almost overnight. Evacuees poured into town by rail - not only children. Thousands of adults left London and other big cities determined to avoid air raids, and the indiscriminate use of gas. Some had obviously made arrangements with relatives, but most simply packed a few belongings, got on the train, and started knocking on doors when they arrived. My parents took in a lady called Miss T— and a Mr and Mrs B—, also from the capital. They turned out to be a Jewish couple hailing originally I think from Russia.

"The holiday season had not yet ended. The town was already full with visitors. Many expected them to return home immediately war was declared, but very few did. They probably thought that this could be their last holiday for some time, and determined to make the most of it.

"In addition to those who were were evacuated here (many of the children came, not as individuals, but with their school), there also descended on the town an influx of troops. Among the first to arrive was a cavalry unit, equipped now with tanks, yet still, strangely being issued with riding breeches. The tanks, or rather their drivers, found Ilfracombe’s narrow streets difficult to cope with. I remember one turning down into our road from the High Street, and taking a lump out of the kerb in the process.

"The breeches were ghastly. Shapeless, baggy and not at all smart. At this point we will leave the tanks and follow the breeches, for reasons which will become apparent.

"Now that we were at war, my father thought it might be an appropriate time to renew links with his old Regiment. The reason for this was that he could see no future for the business he had started. Stock would be difficult to acquire. The ‘season’ wherein most of the business was done was at the least, uncertain. A return to the Army seemed a much more certain means of employment.

"Accordingly, he wrote to the relevant authorities offering his services if required. He was then aged 44. He was asked to wait a while to see how the situation developed, and this is where the breeches come in.

"As I remarked, the aforesaid breeches were unsightly. Answer? Go to a tailor and ask him to ‘wing’ them. This process made them flare out in the right place (the thigh) and become tighter fitting around the seat and lower leg. The soldiers were delighted with the result; the news spread throughout the unit.

"The town was filling up rapidly with Service personnel, every one of whom wore a uniform, and very few of the uniforms fitted. Almost all needed something sewn on (different Regiments had ‘flashes’ of various colours) and many needed repairing or pressing.

"Thus it was that W.B. Hancock, Tailors and Outfitters, never looked back."

Extract from the unpublished memoirs of Bill Hancock, 1927-2014. 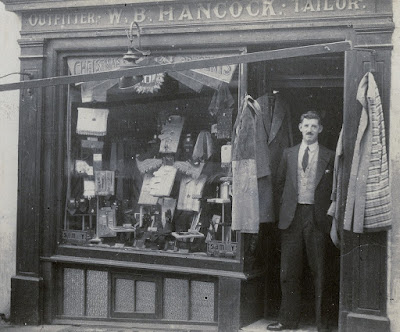 In later years Dad developed a passion for history and one of the periods that especially interested him was the Second World War. His memoirs bring alive not only the experiences of one family, but also the wider context of the upheaval going on around them at the time.

At its best, isn’t that what historical fiction does, too? 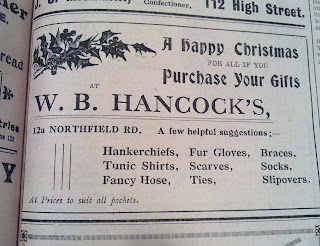