Beyond Bedlam - by Judith Allnatt

The word ‘bedlam’ conjures up images of chaos and madness. This is hardly surprising since the word is derived from ‘Bethlem’, after London’s Bethlem hospital, notorious for most of its 600 year history for the harsh treatment of its inmates, including the insane. Hogarth’s image from ‘The Rake’s Progress’ shows the Rake being manacled by two attendants whilst one lady visitor whispers to another behind a fan. 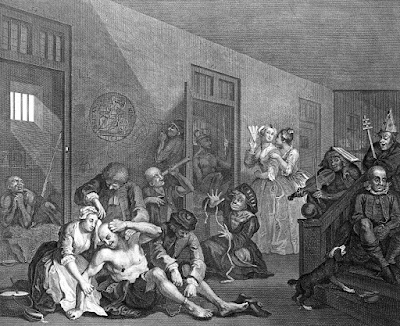 The image neatly demonstrates two major elements of the early treatment of the mentally ill. Firstly, that the emphasis lay with custody rather than cure and secondly that sufferers were dehumanised and treated as ‘freaks’ to be viewed for the frisson of shock, pity or sheer amusement. When the hospital was rebuilt in the 1670s, galleries were constructed partly ‘lest such persons that come to see the said Lunatickes may goe in danger of their Lives’. Physical restraint through the ages included manacles, chains, head collars and strait jackets. Although restraint was said to be used to stop patients tearing their clothes or harming themselves or others, it was also for the convenience of the keepers who performed a role that was more custodial than medical. A regime that commonly included cold baths, purges to induce vomiting and ‘voiding of the bowels’, bleeding and blistering seems as likely to have originated in a desire to cow and exhaust inmates into submission as to treat or cure them.

It was against this background impression of brutality and voyeurism that I began to research the treatment of John Clare’s madness for my novel, The Poet’s Wife. What I discovered was a complete surprise. 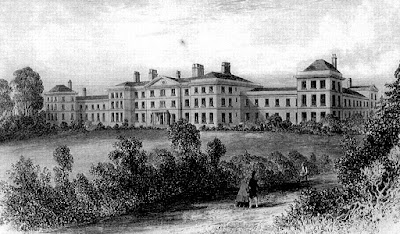 In 1841, John Clare entered what was then known as ‘Northampton Lunatic Asylum’, where he was to live as a patient until his death in 1864. I was fortunate enough to be able to visit what is now known as St Andrew’s Hospital and to be given a tour by its superintendent. The building was brand new when John Clare was brought there; it is built of white stone in a symmetrical  style and is set in extensive gardens. Clare’s maladies included hallucinations (he is reported to have seen ‘devils in a ceiling’), delusions (he believed he was married both to his real wife and to his childhood sweetheart) and at times a fragmentation of personality (adopting the persona of Admiral Nelson, Byron or Shakespeare). In general, his condition was harmless, although occasionally he would see himself as Jack Randall, a prize fighter of the day, which made him a little pugnacious. Yet, far from being restrained, Clare was allowed to wander down into the town where his favourite spot was a seat in an alcove of All Saints church. Here he would write verses in return for a drink of ale or a twist of tobacco to chew upon.

The superintendant explained that during the nineteenth century a large scale change in the care of the mentally ill occurred, thanks to the work of various reformers who, since the late eighteenth century had been championing a new approach that came to be known as ‘moral treatment’. The Enlightenment had brought a new focus of social welfare and individual rights. Perhaps by treating patients as rational beings who could make choices, interventions could be made that would be therapeutic; perhaps, for some patients, a cure might be possible after all.

A founding father of this approach was William Tuke, a Quaker, who created a small community of 30 patients in York in a quiet country house. Patients were given manual work to perform to provide a sense of purpose. His grandson, Samuel Tuke, wrote a treatise on the method, which involved close supervision by staff who were more nurses than ‘keepers’. Good behaviour was rewarded and patients who behaved badly were distracted or lost privileges.

Latterly, John Clare’s illness worsened and sadly disorderly behaviour led to his freedom to roam in the town being curtailed. John struggled with this. He wrote to his sons warning  them not to visit him in case they were 'captured'. Erroneously believing that the superintendent could ‘see’ for a three mile radius all around, he didn’t attempt to escape as he had from an earlier stay at an asylum in Essex but complained volubly that he lived ‘amongst the Babylonians’ where ‘people’s brains are turned the wrong way round’.

However, moral treatment offered other freedoms. He was allowed to work as a gardener, a role that would have suited him well as he had a great love of nature and the outdoors. (Close scrutiny of the image of the asylum above, reveals a man trundling a wheelbarrow downhill).

Even more importantly, both for his wellbeing and for posterity, he was given pen, ink and paper and encouraged to write. We would not have the great body of his poems today if the superintendent had not followed the tenets of moral management and supported him. John Clare wrote perhaps his most famous poem ‘I am’ during his time at the Northampton Asylum – a poem that expresses his feelings of bewilderment and exhaustion with his illness and which cannot fail to touch the heart.
Text of 'I am' by John Clare
Hearts, Flowers and Handfasting - more about John Clare's delusions
More about 'The Poet's Wife'.
Posted by J. Allnatt at 00:01

I have visited Bethlem Hospital in its current location in Kent. It appears a pleasant place with extensive grounds. They have a museum there which gives a brief history of the hospital, and the guide mentioned that in the past it was opened to the public to induce sympathy for the inhabitants and to encourage charitable donations, which it totally depended on, rather than as a freak show, although some would obviously visit for that reason. Prince Puckler, a German prince who visited in the 1820s was impressed by the care the patients received. Obviously horrific treatment gets far more publicity than good treatment, but hopefully, although ignorant of the best way to treat people with mental illness, there was some compassion in looking after the patients.