The Germans had invaded in May 1940, and the Franco-German armistice had been signed on 22 June of that year. In September, the Germans demanded a census of Jews in the occupied zone, and this was swiftly followed by measures against the Jews, defining Jewishness and banning them from certain occupations. Soon after, Jews in Baden and the Palatinate were rounded up, deported to France and interned in camps where conditions were appalling and people soon began to die, of disease, malnutrition and lack of medicines. Some of these camps were in the south, in the unoccupied zone.

On 20 January 1942, the infamous meeting at Wannsee was held, at which Germany committed itself to the Final Solution.

So far, in Vichy France, things were not so bad for the Jews, and particularly not for the French Jews. Surely, they thought, they would be safe - even if the foreign Jews were being targetted. In July, there was a huge roundup of Jews - a rafle - in Paris. 12,884 people were arrested, including children. They were initially held in a sports velodrome without food, water or toilets, then taken to camps such as Drancy from which they were deported, many to Auschwitz.

The French had co-operated with the Germans in the matter of the arrests. But there was widespread revulsion at the arrest of children. In the south, the Catholic Church had been keeping very quiet. But now, some priests became determined to resist.

A number of organisations had been working in a camp in Venissieux, near Lyons, trying to alleviate the dreadful conditions. In August, the first deportations of Jews from the southern zone began. The organisations, together with two Catholic priests, Pere Chaillet and Abbe Glasberg, determined that at least the children must be saved. They knew that they would not be able to save the parents - they had little time and limited resources - and there were terrible scenes as they had to persuade the parents to let their children go, knowing they would probably never see them again. 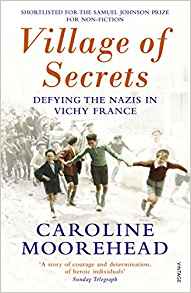 The children were taken to Lyons. When the authorities heard what had happened, they were furious, but the priests were adamant: 'Vous n'aurez pas les enfants' - you will not have the children. The children were dispersed, into families, villages and isolated communities.

And eventually, most of them ended up in farms and villages high up on the Plateau Vivarais-Lignon. This was a remote, isolated area: in the winter it was bitterly cold, and difficult to get about because of the deep snow.

Because of its remoteness, it had provided a place of safety many years before for Protestants: the proportion of Protestants here was far higher than in the rest of France. Their inclination was to be non-conformist in all sorts of ways, and they did not share the widespread admiration for and loyalty towards Petain. In particular there was a sect called the Darbyists, robust and independent. They believed they had a duty towards refugees and the homeless; and they felt it an honour to provide a refuge for members of God's chosen people - the Jews.

The story of how they did this is told in Caroline Moorhead's book, Village of Secrets. I found this a fascinating account of a story I hadn't heard of till I began to do some background reading background reading for the children's novel I'm writing at the moment. However, it's interesting to note that among the reviews on Amazon there are a number by people who actually lived on the plateau during the war, who are highly critical of some aspects of the book. Perhaps there's another book in how the episode has come to be remembered.

In any case, I'm grateful to Caroline Moorhead - if it hadn't been for her account, I would never have known about this inspirational story.
Posted by Sue Purkiss at 02:00

Looks fascinating, Sue, and inspiring. Also interesting, as you say, how people's memories of past events are held with such conviction yet are so different. Thanks for posting!

Thanks for this, Sue. We need stories like this.