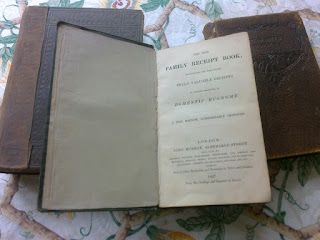 This book has been in my family since I was a child; I can only assume it's been handed down over generations, and it's given me and my mother quite a lot of amusement over the years. It is: The New Family Receipt Book, Containing one thousand Truly Valuable Receipts in various branches of Domestic Economy: London, John Murray, Albemarle Street, 1837

Yes, to set the scene, that's the same John Murray who was Byron's friend and publisher, though by 1837 Lord Byron had been dead for 13 years. In 1837 Charlotte and Emily and Anne Bronte were unknown schoolteachers. Jane Eyre would not be published for another ten years. In June 1837 William IV died and his niece Victoria ascended the throne: no one could guess it, but she would reign for the rest of the century; the Victorian Age was about to begin. In July Isambard Kingdom Brunel's ship the Great Western was launched in Bristol; Lea and Perrins started making their famous Worcestershire Sauce in August, and Spring-Heeled Jack was sighted in London in October. 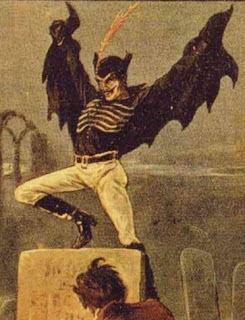 While all this was going on someone, somewhere in my family, purchased this little book of remedies, recipies and practical tips. Here are some examples.

Gargle for a Sore Throat (it sounds much nicer than anything you can buy in Boots, but why would you gargle with it and not drink it?):

Take half a pound of Turkey figs, put them into a quart of spring water, and let them simmer over a small fire till better than one-half is wasted [boiled down]; in the meantime take a large lemon, cut it in slices and between every slice put some brown sugar-candy; and let it stand before the fire to roast, then strain the figs, and squeeze them through a coarse cloth, and put the juice of the lemon into it. Gargle the throat with it, warm and the oftener the better.

Avoid, as much as possible, living near Church-Yards (danger of getting fevers from the ‘putrid emanations’ which emanate from the ground in spring).

Rules for Preserving Health in Winter (wear a night-cap in bed, ‘go not abroad without breakfast, shun the night air as you would the plague, and let your house be kept from damps by warm fires’).
Preventive of Autumnal Rheumatisms (light fires even if it means dirt; ‘Follow your feelings’); To Promote Sleep (do not keep a ‘fire, rush-light or candle’ burning in your bedroom, for it ‘vitiates the air’ and also disturbs rest).

Drink ‘Tar Water’ – yes, that is actually tar dissolved in water –  to ‘Expand the Lungs of Public Speakers etc’ (though ‘it may be as well, especially at first, to try how it sits on the stomach’).
A German Method of Preventing Hysterics (surprisingly gentle, this one: pounded caraway seeds mixed with ginger and salt, spread upon bread and butter and eaten twice a day).

To Prevent the Mischief arising from the Bite of Mad Dog (cut out the bitten area or else cauterize the bite with a red-hot iron: ‘Nothing else is at all to be depended on’; did Emily Bronte own this book?)

Hints for Ventilating Stage Coaches (who knew they were so air-tight? This involves letting an air-tube into the roof, with a grid to prevent the hoi-polloi riding outside from dropping things through)
A Mode of Avoiding the Fatal Accidents of Open Carriages (here, though I’m rather puzzled by the penultimate sentence, I love the somewhat hopeless ending):

Jumping out is particularly dangerous (the motion of the gig communicating a different one to the one you give yourself from jumping), which tends very much to throw you on your side or head; many suppose it easier to jump a little forward and alight safe; ‘tis supposition; they will not find it so on trial. The method of getting out behind the carriage is the most safe of any, having often tried it, when the horse has been going very fast. – Perhaps it is best to fix yourself firm and remain in the carriage. 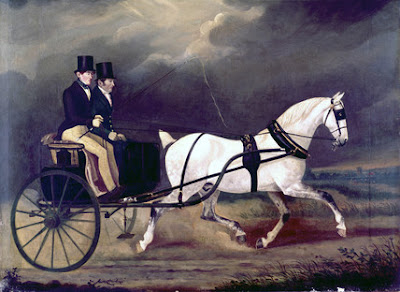 I will end with a truly stunning recipe for Genuine British Punch which - I have to say -  sounds a lot better than any punch I have ever tasted; our forebears clearly knew how to throw a party. I might leave out the capillaire syrup which 'may be added', though: it's also known as Maidenhair Syrup and is made from the leaves of the maidenhair fern, sweetened with honey and mixed with water or milk.

Procure half a dozen ripe, sound and fresh lemons, or a proportionate number of limes, and two Seville oranges. Rub off the yellow rinds of three or four of the lemons, with lumps of fine loaf sugar; putting each lump into the bowl, as soon as it is sufficiently saturated with the grated rind. Then thinly pare the other lemons as Seville oranges, and put these rinds also into the bowl; to which, adding plenty of sugar, pour a very small quantity of boiling water and immediately press the juice of nearly all the fruit, followed by a little more hot water. Blend the whole thoroughly with the punch ladle. The sherbet being thus prepared, to make it into genuine British punch, spirit should be added, to the quantity of a bottle of Jamaica rum to every pint of the finest cognac brandy. The above quantity of fruit, with a pound and a half of sugar, will make enough for a bowl that may contain two gallons; the strangth, or weakness, must be suited to the general inclination of the company. Pine-apple rum, and capillaire syrup, may be used if convenient.

I want to try that punch, and this is despite not being a big drinker at all.

How lovely, and comforting, most of these recipes sound! I'm so glad, though, that we now live in an age of central heating.

I feel a fit of hysterics coming on... That sandwich sounds rather tasty.

Yes, and why have I never tasted pineapple rum?