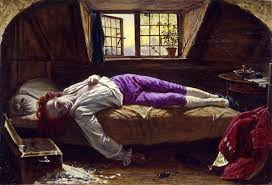 This painting by the pre- raphaelite Henry Wallis created a sensation when it was first exhibited at the Royal Academy in 1856, nearly ninety years after Chatterton’s death, accompanied by the following quotation from Marlowe:

Cut is the branch that might have grown full straight
And burned is Apollo's laurel bough.

Who was the young man who aroused such powerful feelings? .Chatterton was born in Bristol, the son of a musician, poet, and dabbler in the occult who died just before Thomas was born. He grew up in poverty with his sister and mother, who ran a girls' school and took in sewing. The boy was sent to Colston’s, a Bristol charity school where the curriculum was limited to reading, writing, arithmetic and the catechism.

Thomas was precocious and was close to his uncle, the sexton at the church of St Mary Redcliffe. Thomas became obsessed with the knights and civic dignitaries on the tombs and the chests full of parchment documents going back to the fifteenth century. He learned to read from the illuminated capitals of an old musical folio and a very old Bible. He wasn’t interested in playing with other children and was even thought to be educationally backward. He only wanted to read and write and by the age of 11 he had become a contributor to the Bristol Journal.

He used to lock himself in the attic of his mother’s house with old books, parchments and drawing materials; there he lived in his fantasy world with 15th-century heroes and heroines. When he showed one of his fake manuscripts to the usher at his boarding school he claimed it was the work of a 15th-century monk and poet, Thomas Rowley, whose patron had been the great Bristol merchant Canyngs, five times mayor of Bristol, the man who rebuilt St Mary Redcliffe.

He copied his verses in pseudo-medieval English onto the old parchment he found in his uncle’s church. There are parallels here with Macpherson’s invention of the poet Ossian (see my blog for the History Girls in February 2016). But when Macpherson died in 1796 he was buried in Westminster Abbey near the grave of his harshest critic, Samuel Johnson, despite the controversy surrounding the Ossian poems; Chatterton had a crueller fate.

When he was sixteen he left his first job, working in a scrivener's office. Unable to earn a living as a poet in Bristol he moved to London, dreaming of becoming rich and famous there. In an attic room at 39 Brooke Street he lived on the verge of starvation. In his lonely attic he wrote political letters, eclogues, lyrics, operas and satires, both in prose and verse. He longed to be able to send money to his struggling mother and sister in Bristol. When his landlady invited him to dinner he assured her that he wasn’t hungry. The editors of the various journals he contributed to paid him at the rate of a shilling an article - and their payment was often late. 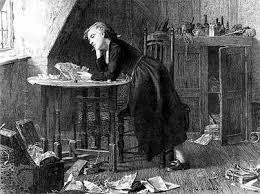 While walking in St Pancras churchyard with a friend Thomas absent mindedly fell into an open grave. His friend helped him up, joking that he was happy in assisting at the resurrection of genius. Chatterton replied, "My dear friend, I have been at war with the grave for some time now."

Three days later he committed suicide; he drank arsenic after tearing up some of his manuscripts. He was seventeen.

Well, what could be sadder or more romantic? His short tragic life inspired many other poets: Keats and Shelley identified with him as a misunderstood genius unappreciated in his own lifetime. Keats wrote a sonnet, To Chatterton, and also dedicated Endymion “to the memory of Thomas Chatterton." Coleridge felt a “kindred doom;” Wordsworth (see below) also admired him. and Hazlitt wrote in one of his essays, “He was an instance that a complete genius and a complete rogue can be formed before a man is of age.” Samuel Johnson, who wasn’t easily impressed, wrote of him, “This is the most extraordinary young man that has encountered my knowledge. It is wonderful how the whelp has written such things.”

Not everyone was so enthusiastic. After Chatterton’s’s death Horace Walpole wrote to a friend, “I cannot find in Chatterton's works anything so extraordinary as the age at which they were written. They have a facility, vigour, and knowledge, which were prodigious in a boy of sixteen, but which would not have been so in a boy of twenty. He did not show extraordinary powers of genius, but extraordinary precocity. Nor do I believe he would have written better, had he lived. He knew this himself, or he would have lived. Great geniuses, like great kings, have too much to think of to kill themselves.”

The fame that  eluded him when he was alive spread all over Europe. Alfred de Vigny’s three-act play, Chatterton, was  performed in Paris;  Oscar Wilde admired him and lectured on him;  Dante Gabriel Rossetti wrote a sonnet about him:

With Shakspeare's manhood at a boy's wild heart,—

Through Hamlet's doubt to Shakspeare near allied,

And kin to Milton through his Satan's pride,—

At Death's sole door he stooped, and craved a dart;

And to the dear new bower of England's art,—

Even to that shrine Time else had deified,

The unuttered heart that soared against his side,—

The angel-trodden stair thy soul could trace

Up Redcliffe's spire; and in the world's armed space

Thy gallant sword-play:—these to many an one

Are sweet for ever; as thy grave unknown

And love-dream of thine unrecorded face.


More recently, Peter Ackroyd’s 1987 novel, Chatterton, retells his story imaginatively and explores the psychological implications of forgery. In his version, Chatterton's death was accidental.  There’s a collection of "Chattertoniana" in the British Library and a Thomas Chatterton Society. In Redcliffe Churchyard there’s a monument with this inscription: “To the memory of Thomas Chatterton. Reader! judge not. If thou art a Christian, believe that he shall be judged by a Superior Power. To that Power only is he now answerable.” (This was his own epitaph).