Don't worry if you missed the first part of this, which was last month. It's here if you'd like to take a look, but read on for the quick version: I wrote about  how important a sense of place is to me, and I explained that once I had decided to write a novel using as a springboard my father's experience as a prisoner of war for five years in German prison camps, I decided to go to Poland in the hope of using that sense of place as a way into my story.

Serendipity smiled on me here, as my son has a Polish partner. I had only been once to Poland, and knew from this that knowing no Polish was going to be a drawback. Polish is very different from the languages I know - I wouldn't be able to wing it. And as Joanna explained, whereas many young people know English, older people don't; there was no point learning it, because they weren't allowed to go anywhere. Only Russian was taught in schools. I was reminded of something an old friend of Dad's had said - he'd also been a prisoner. Speaking of Poland, he'd shaken his head and said quietly: "That poor country. Germany on one side, and Russia on the other."
So I was delighted when Richard and Joanna offered to meet me in Warsaw and then head north. Both the camps Dad had been in - Thorn/Torun and Marienburg/Malbork - were south of Gdansk, or Danzig as Dad knew it.
Poland has much hotter summers than England, and that year was no exception. Poland has fast trains, but ours was a slow one. The fare was incredibly cheap, but the rolling stock was ancient. There was no air conditioning, you could only get a breath of air through the windows, and it was warm. Very, very warm. The journey seemed long. The journey was long. 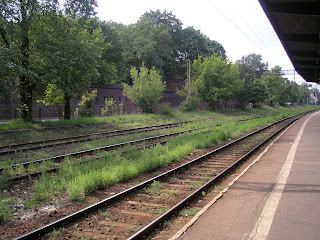 At last we arrived at Torun, pulling into a large station which looked as if it had changed very little since 1940. The buildings were covered in peeling pale pink stucco: tussocks of grass grew between the rails. Beyond the station, which was on the south side of the River Vistula, I could see a brick wall with what looked like peepholes set into it; I wondered if it was anything to do with the camp, or with the earlier fortifications dating from the Franco-Prussian war, which I knew had preceded it. 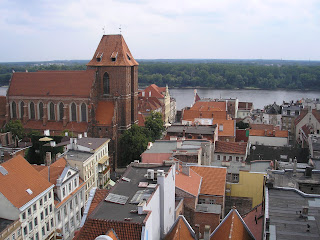 We were staying in the old town, north of the river. Torun, the birthplace of Copernicus, is a lovely mediaeval town, with cobbled streets, copper coloured roofs, fairy-tale towers, and shops selling gingerbread, the local speciality. I could enjoy all this, but I knew that the prison camp was south of the river, south of the town: Dad would have been marched from the station to the camp. Would he have even seen this place where I could walk freely?
We knew from plans and maps we'd taken from the internet that the POW camp had utilised some of the old Prussian forts, and had also built one of the more familiar hutted camps, which expanded as the number of prisoners increased. Joanna asked at the Tourist Office if there were any traces of the camp. They gave us a leaflet which reiterated the information we already had, but other than that could tell us very little. In recent years there had been a trickle of visitors like ourselves, but before that, for forty five years after the war, there were few visitors from abroad, and the government had little interest in preserving reminders of a war which for us in the west had been about preserving freedom, but in Poland had led merely to a different kind of oppression.
This was discouraging, but we decided to take a taxi and see if we could at least find the sites of some of the forts.
And serendipity smiled again. The taxi driver listened to Joanna, and then declared that he knew exactly what we were looking for. Why, had not his own father been imprisoned in one of these very forts? He swept us off on a tour. 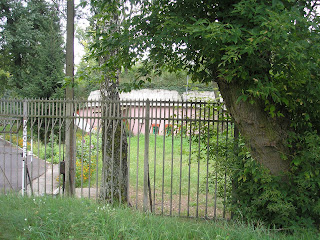 They were curious remnants. One fort had been painted pink, and was surrounded by bright flowers. Others had been incorporated into army buildings, and were behind locked gates. The site of the hutted camp was a wind-blown wasteland, with just a few broken concrete posts, angled and trailing bits of barbed wire. The place was bleak, even in summer. It was interesting, I thought, that it had not been used for building; but then there is no shortage of land in Poland.
Our driver saved the best till last. He drove us along an unmade-up road, stopping in front of rusted corrugated iron gates into which a human-sized door had been cut. He pushed it open and cheerfully waved us though; we looked at each other, a little uneasy. The place was remote: the sounds of the 21st century were distant and muffled. His father had been here, he told us, and he himself had played in this place as a boy. We knew it had also been used for British prisoners: I had read an account in the BBC's excellent People's War archive of a prisoner arriving here. 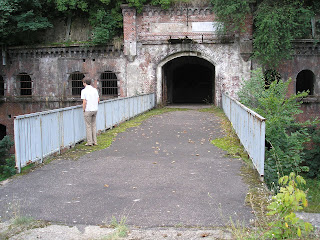 It looked like a disused quarry, with high banks all round. Grass had pushed cracks into the concrete floor. Opposite the entrance was our final fort, built of crumbling red brick with barred windows and arched doors. In front of it was a dry moat, crossed by a utilitarian bridge: this was no fairytale castle. I imagined the feelings of Dad and all those other prisoners as they saw what lay ahead of them: did they even know where they were? We know that the allies were to win the war: they had come from what was, for them, the disaster, not the triumph of Dunkirk: the last they knew of the progress of the war was that Britain and France had suffered a crushing and humiliating defeat.
We didn't go on to Malbork, as we'd originally planned. The exact whereabouts of the camp there are uncertain, and the thought of another long hot train journey had less appeal than the alternative, which was to head south to Lublin where my small grandson was staying with his Polish grandparents. It was time to leave the past behind for a while, and go to meet the present.
The train to Lublin was hours late. As we waited on the platform, a troop train passed by, carrying young soldiers. They were off to training camp perhaps, or to some other war. I thought about what we'd seen. There had been no eureka moment; no specific place which had given me that visceral link into the heart of a story in the way that Athelney or Wayland's Smithy had done for Warrior King.
But I had felt a connection with those other young soldiers of almost seventy years ago. I had arrived on a hot stuffy train, and found it uncomfortable; they had arrived in overcrowded cattle trucks with no windows. Most of them were in their late teens and early twenties; they'd had to do their growing up away from their homes, away from the pretty mediaeval town, not knowing how long they would be there for. As Harriet Castor put it in her post earlier this week - I had felt their breath on my cheek. It was enough.

This is wonderfully evocative and touching, Sue. It's good to have a place to visit for these family connections with history. I've tried, but with less success. Still, even being in roughly the right place helps to lift the veil a little.

You made me feel it. Thanks for this and your earlier post.

Sue, this is such an atmospheric post, and immensely moving. I'm particularly struck by your mention of how, to your father and his fellow prisoners, Dunkirk represented a disaster. So easy to forget that now. And to think of being swallowed into a POW camp at that point in the war... and presumably hearing no news for a long time of how things were going? It must have been desperately hard to fight off despair.

Excellent post, Sue. And I do like your point that we see history with the ending built in, dominating our perceptions, whereas those who lived through it were in a state of uncertainty. Odd how hard it is to realise that!!

Thanks for your lovely comments, everyone! But, Cat: what does 'Oh!' mean...?

If I really was a cat my fur would have rippled - I would have sensed ghosts. It was the same feeling I had when a taxi driver in Rotterdam took five of us on a small detour because a young, rather smart-alec sort of journalist travelling on the same ship as the rest of us had said "The war is over. You should forget about it." The taxi driver took us past a bomb site that still had not been cleared and said, "The war is over yes. If we do not want it to happen again, we will remember that." That was 1972 and I don't know about the journalist but I have not forgotten. Cat

Just catching up on balaclava Sue and wanted to say how moving I found the account of your Polish journey. I rememember talking with you about your hopes to write your dad's story in Bath last year. Good that it's all coming together. Books like this are SO important.