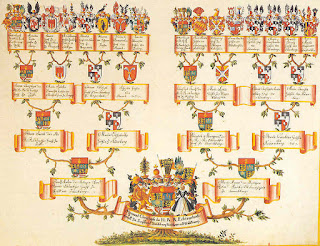 This one's a beaut, isn't it? It shows the ancestors of Sigmund Christoph, Graf von Zeil und Trauchburg.  I've been thinking a lot about family trees since an email conversation with our November guest Sarah Gristwood. I had mildly criticised the one in her excellent book, Blood Sisters,  for the Houses of York and Lancaster. Sarah was in complete agreement, having been compelled to make simplifications by the book's designer.

The scales fell from my eyes at that point. Ever since seeing the RSC's magnificent Histories Cycle - twice - a few years ago, I have been fascinated by Plantagenet history and no book I have read on the subject since has had an adequate family tree. I have been compiling my own composite genealogical chart on a large roll of paper and I can see why designers might ask for simplification!

Family trees have been popular ever since this representation of the Jesse Tree, representing the descent of Christ. That's a pretty ambitious project; not even my Plantagenet one aims at 43 generations!

But if you think about it, no family tree can include everything, or it would end up containing everyone in the world. So where do you stop? Confucius's genealogy, initially represented as a fan, was said to have two million people on it. The update has 1.2 million living descendants! Not even the longest roll of lining-paper would cope with that.

Genealogy is a fast-growing hobby in the UK for people who want to research their family history; in our family, it's my older sister who has the bug. She sends me bulletins from the genealogical research front, with titbits about obscure relatives from generations back, complicated by the fact that in our parents' families there was a marked tendency to call people by names other than their given ones.

The resources for such seekers after  facts - the chroniclers and archivists to be found in many families - are so much easier to gain access to in the Internet age. My sister uses the UK censuses up to 1911 and they have yielded much information. There are many books published to help and the success of UK television shows such as Who do you Think you are? has swelled the numbers of people joined Societies which share resources. There is even genealogy software to help generate family trees. And websites like Family Search and the BBC's Family History

When our youngest daughter brought home the man who was to become her life partner, she lent us the DVD of a TV show that used him as a subject to discover links to distinguished ancestors, such as the Duke of Wellington, the man who helped win the Battle of Bosworth field for Henry Tudor and - the clincher - King Arthur!So that's a new use of family trees - a sort of Debrett's to impress potential in-laws.

When I write my own novels, I always make family trees. Sometimes they end up published in the final books, as in the di Chimici genealogy above, for the Stravaganza sequence.  This one takes you up only to 1578 though the most recent book, City of Swords (2012) has added - and subtracted - some names. That's what writers of fiction do after all: bring people into existence and sometimes kill them.

But even when they aren't published, I need my family trees. How can you write about any characters without knowing how they fit in that web of relationships? How can you get the ages right? And how can you climb about confidently in the branches of your story without a strong tree to support you?

Great blog, Mary. I once drew up a family tree just as you say, to sort out the plot of a short story, and it was the only story I've ever written that has earned me a compliment!

Coming late to this but yes, fascinating. I have a sister in law who has made a very complicated family tree of her family....makes my eyes water to think about it all but yes you do need a tree of sorts for a novel or you can get lost!

Excellent point about making a family tree. In addition to a timeline, I think I'll make one for the next novel I write!