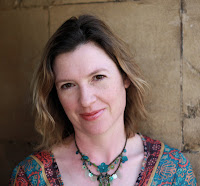 I am annoyed with history this morning.  It doesn't behave.  I plan out a fabulous scene, even begin writing the blighter, and then discover a little later on that it was impossible.  I suppose I could give myself the pass that I'm writing fiction, but this is where the historical novelist who cares about his or her research parts company with fantasy.  In short, my characters may be invented but my historical moment isn't.  If it couldn't plausibly happen to someone, it can't happen to my heroine.

Blast. Back to the drawing board.  Following a trail of googled breadcrumbs, my dead end does a Maria Von Trapp (remember "when God closes a door, somewhere he opens a window"?). Now that's even more interesting than what I thought happened.  A new scene presents itself.  The last fifth of my novel changes direction and a whole cast of minor characters pop up to people it.

This little episode above, just lived out in my study, is probably very familiar to anyone who has tried writing a novel set in the past.  The problems of guessing what might have been where the historians haven't cleared the ground ahead for you is usually where these wrong turns happen.  In my case, it concerned the treatment of enemy aliens in Britain during the First World War.  There are anecdotes of attacks on German families (or even those with vaguely Germanic names) and information about the internment camps for men.  Did you know that the Olympic Stadium is built pretty much on the site of one of them, an old Jute factory?  I don't remember that being featured in the Opening Ceremony.  Alexandra Palace was also used for this purpose.  One of the prisoners was a decent artist and the Imperial War Museum has his pictures online if you'd like to take a look at life inside the wire.  The Isle of Man became home during the war to thousands in several camps, including one near Douglas on the site of Cunningham's holiday camp for Young Men - splendid sounding institution to give young men of modest means a healthy and wholesome holiday!  Obviously, being stuck in a tent for an indefinite period as a guest unable to leave was no picnic but that camp had a better reputation than the large one at Knockaloe.  I imagine it was thought that the island itself provided a second barrier to prevent the German men getting up to no good (though most of them were a rather puzzled set of waiters, barbers and butchers who had lived for many years in the UK before war broke out).

That was all very interesting and relatively straight forward to find out, but what I could not discover was what they did with women.  After researching and reading, I did find the answers but I was left with the impression that there is a gap in the market for a book on the subject if there are any historians reading this.

The urge to bend history as we write is inevitable.  We have a story demand to fulfil and sometimes the truth is either too boring or too extraordinary to be believable.  Let me give an example of the latter.  In the same book, I'm writing about WWI pilots.  In the brilliantly informative Fighter Heroes of WWI by Joshua Levine, he recounts a training accident where a pilot's belt gives way as he loops the loop.  He free falls (they weren't allowed parachutes as it was thought to encourage cowardice) and naturally thinks he is a goner.  The plane just happens to carry on its course to come alongside him and he manages to swing back into the upside down cockpit, right the plane, and glide to a perfect landing, having inadvertently strafed the airfield during his struggles to get back inside.  Outside of a James Bond film, that is very hard to believe but it happened to Graham Donald in his Sopwith Camel.  I thought about having an incident to echo that real life experience but in the end decided it would jettison my reader from the cockpit of the story and they may not be able to get back in.  That door closed, obviously there were plenty of windows still open.

Have you ever come across anything like this too amazing to be fiction?  Let me know in the comments below.

Amazing story about the pilot, Eve. The kind of thing if you introduced in your narrative your editor might declare it 'not a credible storyline' I had an uncle who was in charge of 'war dogs' and guarded German POWs in WWII. He said some were so young and hungry that the British soldiers gave them their food rations.

Thank goodness for blogs - you're right that it might be a leap too far in a book, but that pilot story is too heart-stopping not to share!

That's amazing, Eve! I don't think I've come across anything like that in mt own researches - something true but too crazy to be believed - but I suppose a WW2 instance would be Douglas Bader. A pilot who loses both legs, yet returns to active service, fights in the Battle of Britain, bails out over occupied France, is captured, escapes, ends up in Colditz ...

You couldn't invent him.

What I really want is a time machine so I can go back and look! I'm writing about real incidents and real people in the seventeenth century as well as invented ones, and the key historic event in my current story is something that historians have recently redated when new evidence turned up.

This means the time-scale of other events needs reviewing too, plus every time I consult a book I have to remember to check if it was published after the new dating took place and whether or not the writer took the new information into account.

Much better just to crank up the Tardis and see what happened and who was doing what when...

Great post Eve! I love the pilot story. If anyone wants to read Graham Donald's own account it is here:
http://tinyurl.com/atp6shk