On Saturday, on my way to attend a lecture about Iconic Queens, I stepped into the lift in the National Museum of Scotland in Edinburgh and, quite by chance, met someone I knew. Alongside her Remembrance Day poppy she had a blue flower pinned to her coat. 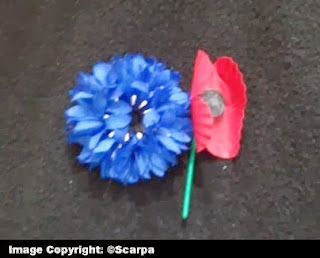 ‘Oh!’ I said. ‘I’ve never seen that before.’
‘Up until last weekend, neither had I,’ she replied.
‘I was in Yorkshire near to where French troops were stationed during World War One.
At the commemoration services on Sunday
these were sold along with our red poppies.
I think it’s a cornflower but I don’t know why
it’s used by the French as a symbol of the Great War.’

I was very much taken with the flower to the extent that her husband, who was with her, unpinned his own flower from his lapel and gallantly presented me with it. I was delighted and touched by his gesture. But it also sparked something within me. Do you know that twitchy-itchy feeling when you just have to find the why and when and the rest of the story?

I did know the background of the UK Poppy as I’d researched it while writing Remembrance. It’s well-known in the UK and Commonwealth countries as a symbol for the Great War and thought to have originated partly from John McCrae’s poem: In Flanders Fields.
You can see the poem engraved on a plaque near a graveyard outside Ypres where the Canadian surgeon worked on wounded men in a cramped dank chamber dug out of the canal bank.

In Flanders Fields the poppies blow…
Between the crosses, row on row 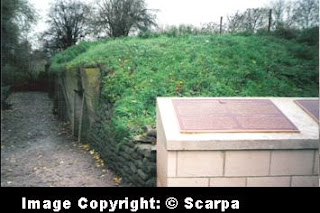 At the end of the War an American, Moira Michael, wrote a poem called: We Shall Keep the Faith. It’s like a reprise to McCrae’s poem, and in it she declares that we should never forget those who sacrificed their lives or the lessons to be learned from the War.
She also promises to wear a Poppy to honour the dead…

Every year millions of these are sold on behalf of the Royal British Legion to help veterans and those wounded in war.
It’s a very powerful iconic symbol and was used on the cover of my book. When in the Imperial War Museum in London recently, I noticed, beside mine on the shelf, an edition of All Quiet on the Western Front with a red poppy as the sole motif. 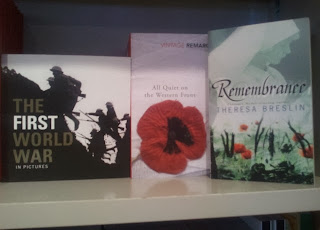 Later on Saturday I went out to dinner with a large number of people. There were several tables and no formal seating plan. In the serendipity way these things happen I ended up, again quite by chance, sitting beside the only French person in the group!
I hurried off to the cloakroom to retrieve my coat and show her my blue flower.

So now I knew its name. But my dinner companion didn’t know a great deal about the symbolic origin of the flower. I had to wait until I was on the train speeding home to use my phone to try to check references, and then over the following days to contact French sources and find more information.

One hundred years ago in France cornflowers grew in great profusion in the fields and hedgerows. All through the time of that most terrible War they continued to flower, even during the worst of the annihilating bombardment. They were a bright note of colour among the battlefields of Flanders, the Somme and Picardy.

The poignancy of the colour was emphasised by the arrival

onto the Front Line of a huge number of young French soldiers,
kitted out in their new and distinctive blue uniform.


As the war progressed the suffering of the poilu increased; living and dying in horrific conditions with casualties arriving in hospitals, maimed and mutilated. A French nurse, Suzanne Lenhardt, who held a senior role in Les Invalides, and Charlotte Malleterre, a relative of a military commander, began to organise work for those recovering from their wounds.
When the war ended they saw that many of these soldiers would be discharged with no prospects. They formalised the organisation and established workshops where the men could make little lapel badges from blue tissue paper to sell to the public and thus provide an occupation and income.

Their organisation, now known as ‘Le Bleuet de France’, continued on, but with a fairly low profile. More recently it has received backing from the French Government and continues to support veterans and the families of those who die for France. There are various War memorial days in France, but now on November 11th, at the commemoration parades and events Les Bleuets are very much in evidence.

What a lovely story, I know the poppies come from disturbed earth but to hear why the cornflowers became a symbol is so nice. Thank you.

I didn't know this - thank you!

Fascinating, Theresa. Thank you for sharing this.
I came across the Bleuet in Picardie a few years ago, but had no idea it was now being made widely available and had even reached UK. Next year I shall certainly try and find one.

It looks very beautiful with the Poppy, side by side - just as you can still see them in the fields of Northern France.


Yes it's strange isn't Ruan that the poppies wouldn't have grown so profusely at that time had the earth not been disturbed due to the war.

If anyone is looking for les Bleuets then Alliance Francaise in the UK has them, if there's one near you.

I have just come back from France where I bought a fridge magnet of this lovely flower from a military souvenir shop at the Pegasus Bridge. The owner of the shop explained how the bleuet is comparable to our poppy but his explanation did not give me this much detail. Just like you I was itching to find out more. Thank you for all your information. I just wish I had seen the lapel bleuets for sale. I guess I'll have to wait till my visit next year.