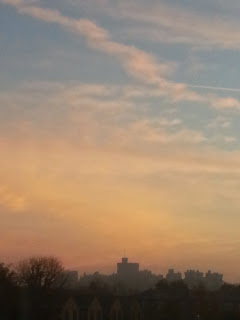 They say absence makes the heart grow fonder, and it's certainly true that the heart of this expat quickens the moment the plane banks over the coast of Britain. I'm just back from a flying visit to the UK for the Thames Valley History Festival, and it was so good to be home. After months of hazy desert light and dust filled skies, the sheer beauty of England had a hyper-real quality, (the golden autumn light, turning leaves, green fields). Even 4am jetlag on the morning of my event had its rewards - the sunrise over Windsor Castle was breathtaking.

The festival was a huge success selling over 1,000 tickets across 23 events with 33 authors/historians in 14 venues of historic interest in 17 days. Many HWA authors took part, and the subjects ranged from 'The English and the Exotic' to the War of the Roses and the story of Christian the Lion, and ten of the events were sell-outs. I'm still 'new' this year to events and festivals, and it was great to see the enthusiasm of the TVHF team, and to meet so many readers (including friends known only through Facebook who came along to support the event). If you have the chance to go or take part next year, it's a wonderful festival, beautifully organised and with a great energy to it. 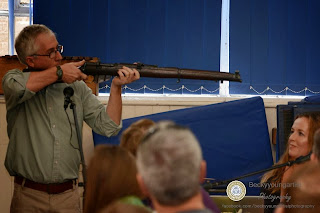 The historian Tim Lynch and I were discussing 'WW2: Home Front to War'. Tim talked engagingly about the brave young lads of the labour divisions, who were, as he described chillingly, 'speed bumps' to the invading German forces in Europe. Untrained, and woefully under-armed, they were lambs to the slaughter. It's not often I've been at gunpoint in Eton, but Tim really brought home their bravery when he slotted a bayonet onto his WW2 rifle and described how the boys fired the last of their ammo then staged a final charge against the heavily armoured German troops. (In a wonderful bit of serendipity, I flicked on the TV on the flight home, to watch 'Who Do You Think You Are' with Patrick Stewart. It looked into the history of his soldier father, and guess who the expert was - Tim. If you're interested in learning more about this fascinating bit of forgotten history, I recommend searching for the programme on iplayer). 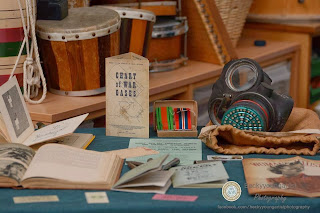 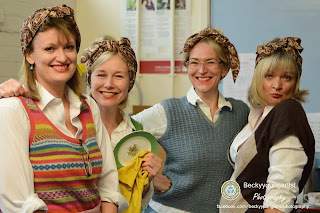 The lovely TVHF team got into the swing of the vintage
coffee morning that accompanied the talk
Credit: Becky Young 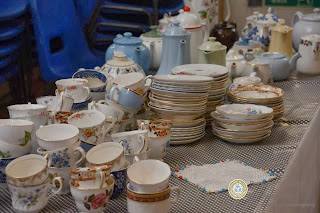 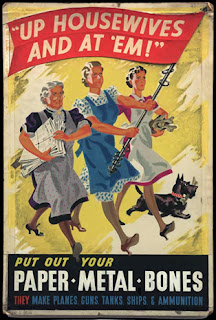 One of the things we talked about during the section on the Home Front was the wartime initiative for recycling which seems incredibly modern. During WW2 saucepans were sacrificed for Spitfires, and everything from waste paper to bones were saved. 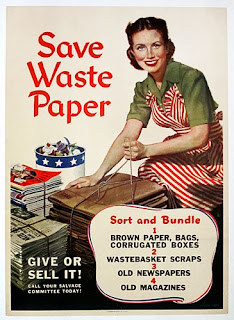 Self-sufficiency was encouraged - people 'dug for victory', and farmed on a small scale. (It might have been more accurate if the poster below said 'two rabbits' ...). 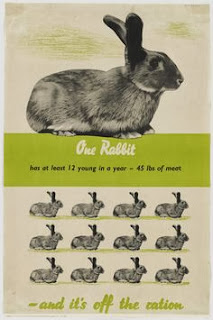 One of the best things about events is how people share their remarkable stories with you. A lady came up and told me she remembered this image from the War, and that someone had once posted her family a rabbit (dead), unwrapped, but with a luggage tag addressed to them around it's neck. 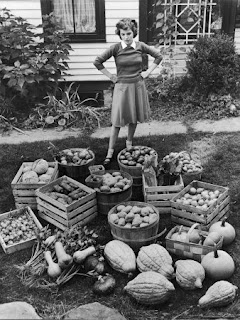 There's a line in Mrs Miniver: 'This is not only a war of soldiers in uniform. It is a war of the people'. The war on the Home Front wasn't all bombs and battles, but a day by day quest to survive, to resourcefully hold together the home, and step into the roles of absent men. The Mass Observation diaries of women like Nella Last, and the wonderfully detailed diary of Betty Armitage are priceless glimpses into how people coped.

These were all initiatives that my grandmothers took. They planted veg and fruit, kept animals including a succession of pigs - Esmeralda I, II, III and IV (my mother remembers weeping for all of them, except Esmeralda III who was a biter that nobody liked). They bottled and preserved, made do and mended. And these initiatives worked - by 1944 households were using three quarters of the fuel they had used in 1938. Britain has never been greener.

Perhaps there's a natural instinct, or wish, to believe that everything improves over time, that the trajectory of history is always upwards. One of my art history professors believed it was more like a pendulum, that eras and civilisations reach a peak, before falling back. Santayana's famous quote: 'those who do not remember the past are condemned to repeat it' comes to mind. With Remembrance Day just passed, it was heartening to see so many children in the audience in Eton - I think the ages ranged from 8 to 80. Remembering both how people fought on the Front and coped day to day on the Home Front is vital. With all our economic problems, (let alone political unrest and calls for revolution), we could learn a lot about self-sufficiency and managing our own home fronts by looking at how our grandmothers and mothers coped during WW2.

So what have you learnt about your historical era that we have forgotten as a society? Have you come across any surprising ways of living that we could do with remembering now?

What a fascinating read Kate Lord Brown with great photos. Sadly I wasn't able to get to Windsor for the Thames Valley History Festival, so thank you so much for sharing this event with me.

This event sounds amazing, I wish I could have been there. I live in Jersey which was occupied during WW11 and there are still many stories about how people coped during those difficult wartime years. Fascinating.

Thank you - there was a wonderful line up of authors, thanks to Manda and the HWA and the great Festival team. Hope you can make it next year!

Thanks, Georgina - Jersey would be a wonderful setting for a WW2 novel. Time to get those stories recorded!

My mum remembers rabbits posted to her like that, they arrived very gamey but were much prized. Mostly she remembers eating spam and tinned pork with bits of sawdust in it... Sounds like a wonderful event!

I can remember, post-war, that the jumpers my grandmother knitted for my brother and me, once I had outgrown them, got unravelled for another jumper, so Omi was always knitting with a crinkly ball of wool. No boy-and-girl colours, these were always fawn, so they'd do both. And when we were small, my mother had only two outfits for us, and would wash at the end of every day. When I think how many outfits my grandchildren have, and indeed, my daughters had - but there was nothing terribly unusual about that; austerity was the norm. People have got terribly wasteful, no doubt about it, and we could certainly learn from that era.

Clare - that's wonderful. I wonder what else they used to send through the post?

Leslie - amazing what we can 'make do' with. And knitting - like baking - suddenly so fashionable again.