We Have No Claim On The Stars, Hedd Wyn another War Poet Catherine Johnson

It's November. The poppy wreaths have been laid and by some modern edict it seems everyone, especially those in public view must wear one or be damned. http://www.huffingtonpost.co.uk/2013/11/13/charlene-white-newsreader_n_4265355.html
It may be just me or it didn't seem to be such a big thing in the 70s and 80s. 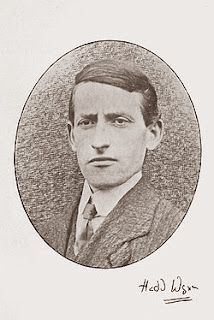 Anyway, in spite of that I am remembering a poet of World War One. A shepherd who only reluctantly joined up in 1917 when those in protected professions were called on. His family who farmed the bleak uplands close to the village of Trawsfynnydd in North Wales had to send one son. Ellis Humphrey Ellis went to protect his younger brother Robert. He was 30.

He went for training in March, was allowed home to help with the harvest and, because he was finishing a poem, didn't go back. The military police came for him in June. He left the poem Yr Arwr, (The Hero) on the kitchen table and re wrote it from memory en route to France. He died at the Battle of Passchendaele on July 31 1917

In the mountains where he lived Welsh was the only language, there may have been some English in school, perhaps if you went for a day with The Band of Hope to the seaside at Llandudno or Criccieth or maybe in town, but if you look on a map, there are very few towns, in fact this area was one of those flooded in the 1920s to make a reservoir to serve the cities of Birmingham and Liverpool.

The Eisteddfod is still the premier Welsh language poetry, literature and art festival. Held yearly alternating between north and south wales, it moves around, a kind of Glastonbury with poetry.
Poets compete for the Crown and the Chair, the crown is for pryddest , free verse, the chair for cynghanedd, a very strict rhyme and metre form. Ellis Evans had been writing poetry since his youth, competing and winning local Eisteddfodau, a tradition of worker poets which has always been strong in Wales. Poems are entered using Bardic names, and Ellis Evans entered the 1917 Eisteddfod as Hedd Wyn - perfect peace.

Poets compete with pen names, and Hedd Wyn (Blessed Peace) was the pen name of Ellis Humphrey Evans, a shepherd and poet from North Wales who died at the Battle of Passchendaele on July 31 1917 aged 30 on the Pilckem Ridge when a nosecap shell hit him in the stomach and he was mortally wounded. 31,000 allied soldiers died on that day too.
When the Eisteddford was held in September that year (in Birkenhead with David Lloyd George in attendance) his final poem, Yr Arwr, (The Hero) was awarded the highest accolade in Welsh literature, the Bardic Chair. When the prize is announced the name of the winning poet is called three times to summon him, or her, from the crowd. When this happened in 1917 (In the presence of then Prime Minister David Lloyd George) there was no answer; the hall fell silent. In honour of Hedd Wyn the Chair was draped in black cloth and the ceremony continued around an empty black clad chair, the 1917 Eisteddfod was called a festival of tears.

His poetry is as moving and affecting as any of the English War poets and he is well known in Wales, but as he wrote in his mother tongue and there are only a few translations his work isn’t as well known as Owen or Sassoon.  His war poetry includes Rhyfel, Yr Awrwr  Nid a’n Dango, and Y Blotyn Du. This is one of my favourites.

We have no claim to the stars
Nor the sad-faced moon of night
Nor the golden cloud that immerses
Itself in celestial light.

We only have a right to exist
On earth in its vast devastation,
And it's only man's strife that destroys
The glory of God's creation.

Click this link to hear children of his local school recite 'Children of Trawsfynnydd in Welsh.

Posted by Catherine Johnson at 08:12

Thank you. I wish I could understand Welsh. It's a beautiful poem in English and no doubt it's stunning in its original language.

Hugely moving and very sad.
What a wonderful poem.

Thank you, Catherine - I'd never heard of this poet. What a moving story - one of so many.