The Undying fascination of Anne Boleyn by Mary Hoffman

If you put "Anne Boleyn" into a search engine, you get over two million results. Do the same on Amazon and you get over six hundred book titles. She plays a starring role in the two Man Booker Prize-winning novels of Hilary Mantel, which are being dramatised both by the RSC (where she is being played by Lydia Leonard) and on television (as yet casting not announced).

Welsh National Opera currently runs a Tudors season containing Donizetti's Anna Bolena. On Facebook there are pages called On the Tudor Trail and The Tudor Library, the latter listing over fifty current fiction and non-fiction titles about Henry Vlll's second wife, who died 477 years ago. Claire Ridgway runs a site called The Anne Boleyn Files which minutely examines every detail of Anne's brief and eventful life.

It is as if we still can't quite believe in that sequence of events from January to May 1536 that changed the world's view of Henry from handsome, golden, chivalric prince to bloated, bloodthirsty tyrant. As Hilary Mantel says, "we argue over her, we pity and admire and revile her, we reinvent her in every generation" (Guardian 11.5.2012)

(And I have just reinvented and killed her again in my latest novel).

Shown on BBC2 this May, The Last days of Anne Boleyn, presented by Dan Jones, pitted historians David Starkey and Susannah Lipscomb against novelists Hilary Mantel and Philippa Gregory. Anne was guilty as charged, she was totally innocent, she slept with her brother (Gregory), she swore before God on what she believed to be her last morning that she had done none of the things she was charged with (Mantel).

With such a wash of interest in the woman who was Queen for only three years, you would think it impossible for anyone to come up with a new angle but Sarah Morris and Natalie Grueninger have achieved it in their book In the Footsteps of Anne Boleyn. These are the writers who run the On the Tudor Trail page on Facebook, the latter also having a site with the same name and the former one for her own fiction and non-fiction writing on "England's most iconic Queen Consort." 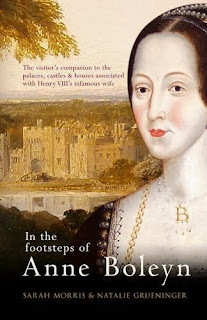 Divided into sections Early Life; The Courting Years; Anne the Queen; The 1535 Progress; Boleyn Treasures, the book is meticulously researched and well illustrated, with a Boleyn Family Tree and six maps.

The Tower of London features in Anne the Queen because the Queen's Lodgings in the Royal Palace (no longer extant) were completely re-decorated for Anne's Coronation. But in that same section, the writers dispel several myths about her execution, which didn't take place where the memorial now stands on Tower Green.

Anne Boleyn was almost certainly born at Blickling Hall in Norfolk, but that house has been altered several times in the intervening centuries.

You can more easily imagine yourself in Anne's shoes at Hever Castle.


Anne went to Belgium when she was about twelve, to serve in the court of Margaret of Austria and was later in France, where as a teenager she learned to dance, to play musical instruments and generally behave like a Court lady. something that served her both well and badly later on in life.

The authors have tracked down all sorts of places associated with Anne Boleyn and visited most of them themselves, even though Grueninger lives in Australia. From Windsor to the Field of Cloth of Gold, Eltham Palace to Notre Dame, they have left no stone unturned in the search for locations where Anne is known or believed to have spent time. It is as thorough as it it is fascinating.

(I recommend reading this book alongside the late Eric Ives' excellent biography, The Life and Death of Anne Boleyn.)

I was sort of expecting you to link the post to a novel you are working on/just about to publish!

The trouble with meticulous history works is that they leave out all the emotion - emotion not being documented of course. We rely on novelists to do the internal feelings. I thought that Hilary Mantel did not get under the skin of Anne. Although she did of her protagonist.

It's much like the case of Richard III. A very short reign and few documented facts so novelists enter the fray to try to give us more in-depth insights . Are you working on something?

Henry's vicious treatment of her is part of why the story is fascinating to me. What happened? What did she do, if anything, or did he just need to make room for a different wife? Because we will never know, we will always be interested.

Sensibilia, i have just completed a novel called The Ravenmaster's Boy, which is with my agent, who loves it. It is set January-May in the Tower of London so of course has to confront these events and characters.

Petrea,my own view is that the knowledge she laughed about about him with her courtiers - on everything from his poetry to his sexual prowess was what sealed her fate. (Though she would probably have survived longer had she borne him a crop of healthy princes).

I am also convinced by the most recent medical theories about Henry's own condition.