Last week I was privileged to give a joint talk on Medicine through the Ages with Ruth Downie, author of the wonderful series of Roman novels. Preparing for our discussion, reminded me of a remarkable 13th century woman doctor called Hersende, who become Royal Physician to King Louis IX of France. Some researchers have suggested that her title – Magistre Hersende Physica – indicates she studied medicine at University.

In 1248, she accompanied King Louis on the Seventh Crusade to conquer Egypt, receiving 12 Parisian deniers a day, which was an excellent rate of pay. Unfortunately for Hersende, instead of the French capturing Egypt it was the French army who were taken prisoner by the Egyptians and she was held captive, along with her king, until the ransom was paid.

﻿﻿﻿﻿﻿﻿﻿﻿﻿﻿﻿﻿﻿﻿﻿﻿﻿﻿﻿﻿﻿﻿﻿﻿﻿﻿﻿﻿﻿﻿﻿﻿﻿﻿﻿﻿﻿﻿﻿﻿After they were released in 1250, Hersende went with the army to Acre. As well as being physician to the king, she tended to the illnesses and injuries of his favourite nobles, including treating them for haemorrhoids and anal fistulas, a common hazard of riding for hours in hot, sweaty armour. And if this was not work enough, she was also put in charge of the health of the many camp-followers. That was not an easy task given that she had to deal with unknown fevers, stomach bugs, childbirth and STDs. But Hersende survived and eventually returned to Paris where she married Jacques, an apothecary, which must have been an excellent business arrangement.

Talking of matches, today, 8th November, is the feast day of St Cybi and St Tysilio, two 6th century saints who were great friends. They both settled in Anglesey, with St Cybi living on a small island off the coast, probably bridged by a causeway. They used to meet halfway every day to pray and talk, but poor Cybi had to walk facing east in the morning and go home facing west in the afternoon, so he got the full sun on his face all day and legend has it, he became so tanned he was known as Cybi the Red or Tawny. While Tysilio, coming the other way, always had his back to the sun, so he was known as Tysilio the Pale or Fair.

St Cybi does have something in common with Hersende, for the saint also had a reputation as a healer, though only when he was dead. It seems he struck a rock with his staff when he first landed on the island and a well sprang up, whose waters were said to cure blindness, scrofula, scurvy, rheumatism and warts. But to be a cured you had drink the well water mixed with equal amounts of seawater twice a day for seven days and bath in the same mixture before retiring to bed in a nearby cottage. If you found yourself growing warm in bed, the waters were curing you, but if you were cold the saint’s blessing was not with you. 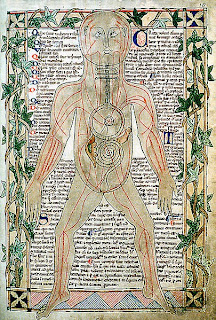 St Cybi’s holy island eventually gave its name to the town of Holyhead, while St Tysilio's name is incorporated in the most famous place name in Britain – Llanfairpwllgwyngyllgogerychwyrndrobwyll-llantysiliogogogoch
Which, I’m told, means St Mary’s Church in the hollow of the white hazel near a rapid whirlpool and the Church of St Tysilio of the red cave. I wonder how often that place name gets tweeted!

That's fascinating - I wonder whether she was able to learn anything from Egyptians, while she was a prisoner.

She probably ignored Egyptian medicine - it made too much sense to be used by Europeans at the time. ;-)

Let's see, what was the name of that woman doctor who taught at the university in Sicily? The name escapes me, much to my embarrassment as I wrote about her in my children's book on women in science.

That Welsh town sounds more like a set of directions on how to get here. :)

First You got a great blog .I will be interested in more similar topics. i see you got really very useful topics , i will be always checking your blog thanks.
bubblegum casting

It’а†s actually a nice and useful piece of info. I’а†m happy that you simply shared this helpful info with us. Please keep us up to date like this. Thanks for sharing. https://adamfantacy.tumblr.com/

Thanks a bunch for sharing this with all folks you really understand what you’re speaking about! Bookmarked. Please also talk over with my web site =). We may have a link change arrangement between us! trevisluke.splashthat.com