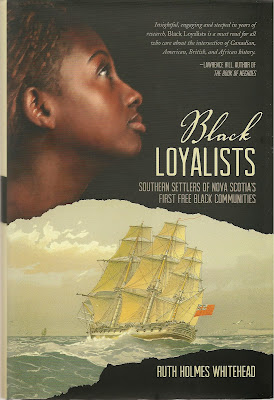 “They had a passion for freedom, and they acted upon it.”

This wonderful book is by my friend Ruth Holmes Whitehead, a distinguished historian and ethnologist who worked for over forty years at the Nova Scotia Museum. Ruth is the author of several books on the history, culture and stories of the Mi’kmaq, the Native American nation which still inhabits New Brunswick and Nova Scotia. We met while I was writing my third book for children, the story of a 10th century viking ship’s landfall on the coast of North America and the crew’s encounters with Native Americans. I approached Ruth for guidance after reading her collection of Mi’kmaq tales: ‘Stories from the Six Worlds’. She lent me the benefit of her years of study, and helped me escape many a pitfall.

Now she has turned to a different but equally fascinating subject: the “more than four thousand black men, women and children [who came] to Nova Scotia as a direct result of the American Revolution (1755-1783).  They came as freeborn persons, as former slaves who had seized freedom from the chaos of war, or as indentured servants. Some came still chained to their enslavers. They came fleeing the British surrender of the thirteen American colonies… [As] these colonies fell to the Americans, mass evacuations of British forces and supporters to their remaining centres of power began to take place.”  The book concentrates on the South Carolina Black Loyalists, many of whose names survive in ‘The Book of Negroes’, a record of black people evacuated from the port of New York.

Early in the war, the British government had offered emancipation to any slaves who would desert their rebel masters.  This was no moral imperative, but a pragmatic attempt to impoverish the American economy and weaken the rebel war effort. Motives aside, however, freedom was on the table, and many enslaved men, women and children took advantage of the offer, escaping behind the British lines, or to the British ships patrolling the east coast from Maine to Georgia.

Runaways risked much.  There were severe punishments on recapture – up to and including death:

“Whoever apprehends the said run away, and delivers him to the warden of the workhouse, shall have Three Pounds reward…” wrote William Harris in 1752, “but whoever brings his head alone, shall be paid Ten Pounds.”  The price of murder continued to rise. Three years later, Thomas Smith offered £10 for Frank, alive, but promised £20 for his head. By 1770, William Waight was offering £10 for a man named May, alive, and £100 for his head alone.

Such savage penalties were clearly designed to terrify.  Ruth Whitehead describes how the wealth and economy of the Carolinas depended upon slaves; many slave-owners were extremely rich. The estate of Thomas Shubrick, a South Carolina landowner, was valued at his death at “the Sum of two Million, one hundred three thousand, eight hundreds Pounds Currency”; this sum was inclusive of over three hundred enslaved people, whose names are tersely recorded in a seemingly endless list: “Dye, Will, Moll, Peter, Philander, Ammon, Dick, Attus, Duke, Richmond, Mingo, London, George, Cuff, Bram, Cato, Molly, Castalia, Jemmy, Mary, Phillis, John, Tony, Nancy…”

The Black Loyalists illuminates a fascinating and moving episode of history which I’d known nothing about. There are so many paradoxes, not least that black people should fight on the side of the King – for the promise of freedom – in the very war which Americans fought for independence. It was not an easy transition. Many of the men joined the Loyalist armies as soldiers. But what about families, what about the women? The children? And what happened when the British surrendered? The American forces under George Washington demanded the restoration of property, including slaves, and it fell to individual British commanders to interpret orders and make decisions on whether to honour early promises. Some Black Loyalists were abandoned, but for those who made it to Nova Scotia, there were still many challenges to face: home-building, earning a living, and coping with often hostile attitudes from local communities.

Each and every one of their stories, if we could fully know it, would be an adventure. What about Savinah Miles, twenty-five years old, who “ran from John Miles’s plantation in the Indian Lands of South Carolina, taking her daughter, Venus, with her. Venus was only nine years old when she escaped with her mother, who kept her free for the next nine years, before boarding L’Abondance [the Royal Navy transport which took the largest complement of Black Loyalists to Nova Scotia].”

‘Kept her free for nine years.’ If only we could know more.

Ruth Holmes Whitehead took eighteen years to write and research this book which is both a work of scholarship and a labour of love, gracefully and clearly written with some poignant personal touches. Ruth herself was born in South Carolina and has found slave owners among her own ancestors; her co-researcher Carmelita Robertson has “multiple Black Loyalist ancestors who escaped … during the American Revolution.”  As Ruth says:

Kath, this sounds like a fascinating and important book. Thank you for writing about it. And that quotation at the end is wonderful.

Thank you so much telling us about your friend Ruth Holmes Whitehead and her work, and for bringing this book to our attention, a book that is a labour of her love and dedication.

So often, the "history story" forgets what happened to those left behind or caught in the middle. A welcome review.

Thanks. It's difficult and awe-inspiring to imagine these lives.

This looks great, many thanks for sharing