THE LAST RUNAWAY by Tracy Chevalier. A review by Adèle Geras 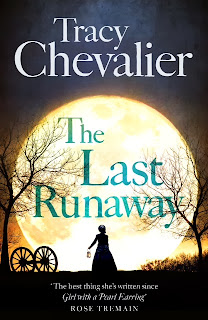 On March 29th of this year, Tracy Chevalier herself wrote on this blog, all about how she researches her novels. It was a fascinating piece and I said in the comments box at the time that I was longing to read the novel. Now I have read it, and I enjoyed it very much and would like to draw it to the attention of those people who love a good historical novel which manages to convey a whole lot of interesting information about a period (pre Civil War America) which we don't know terribly well, but who also want a rattling good story, which will involve them in the lives and loves of its protagonists.

Chevalier is drawn to the artistic or craft process. In her most famous book, The Girl with the Pearl Earring she goes into some detail in order to show us the way Vermeer mixed his paints; the way the paintings were set up and you closed the novel knowing a great deal about what it was like to be a painter at that time, as well, of course as what it was like to be his model. In perhaps my favourite of Chevalier's novels, The Lady and the Unicorn, the subject is the weaving of the famous set of tapestries presently in Musée de Cluny in Paris.

Here, our heroine, Honor Bright, leaves England to accompany her sister Grace to Ohio, which might just as well be on another planet. When Grace dies, Honor is left to make her own way in this strange new world, and the story of her adventures is full of romance, trials and tribulations, discoveries and awakenings. The book moves along swiftly. We see most things from Honor's point of view and there are her letters scattered through the text. She becomes aware of the existence of the Underground Railroad, a way of helping black slaves escape from their servitude in the South to safety in the North. The historical detail is very accurate and we hold our breath with Honor, who, towards the end of the book is hiding her part in the Railroad from her husband and family. 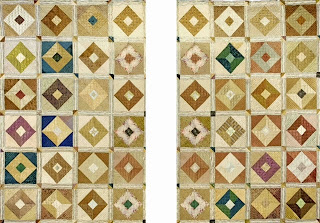 For me, though, the most beguiling aspect of the novel is the quilting. Reading about 'quilting frolics' and the different roles that quilts then played in a woman's life was enthralling. The different styles, the variations and nuances and colours and fabrics are cleverly mirrored in the patchwork way the book works: a bit of farm life, a bit of a letter, a memory of home, a whiff of a love story, a threat of great danger, and someone at the centre of it trying to make sense and harmony of her life as best she can. The characters in this novel, from milliners, to bounty hunters, to all the worthies of the Quaker community, and the (mostly) women who surround Honor most of the time, are all very well brought to life. The black characters too, strange to Honor, are given their fair weight in the story and one of the best moments is when Honor sees a quilt made by one of the Negro (sic) women and remarks on the difference between the two styles of quilting she has met in America, both of which are different from what she was used to in England.

I don't know whether Tracy Chevalier will take it as a compliment, but I intend it as one when I say that I think The Last Runaway is a perfect teenage novel, too. I think that anyone from about the age of 14 who likes an exciting, romantic, historically accurate novel will enjoy this book and I would urge fans of, for instance, Celia Rees's Witch Child, to try Tracy Chevalier. I am wondering where her curiosity will take her next.
Posted by adele at 07:00

It's a great read, and I, too, loved the quilting aspect.
I gather Tracy's next books involves trees - I can't wait!

Sorry, my first attempt at posting got mangled! I am really enjoying the book ... keep having to go back for 'just a bit more'. Tracy's plots are always well planned (like a hidden but sturdy seam or spine) and her characters walk off the page immediately. I have long been fascinated by the (Upstate New York) 'Quilting Bee' portrayed in Grandma Moses' painting (here). Evidently it's a 'bee' in Upstate new York and a 'frolic' in Ohio! For some lovely natural world quilting see <a href="http://ffpquiltcorner.blogspot.co.uk/2012/07/i-finished-it-is-both-hardest-and-most.html>Mary's blog</a>.

This review has made me even keener to read Chevalier's book, Adele, although I had been intending to save it for its Reading Group slot - but that's ages away! I'm going to go back and find her HG research post too.

Thanks for these comments. And thanks to Mary for posting this when I had forgotten even to check....Apologies.

Must look out for this one - sounds interesting.
Liz

I love the idea that the structure of the book works like a patchwork too! Fantastic piece - thank you, Adele.

I just started this book the other day, and was gripped by it immediately. That's enough from me - must carry on reading!

I'm loving it, and I absolutely agree about it being a goody for teenage girls. Thank you, Adele.

I very much enjoyed this - and my daughter thoroughly enjoyed Girl With A Pearl Earring and The Lady and the Unicorn as a teenager!

Again one of your reviewed books is added to my 'must read' list. Having done some quilting work when my children were young that aspect will be an added interest - it fascinates me how the lives of women are tied to this craft. Thanks Adèle

It sounds wonderful,Adele - thanks for the review!

Thanks for mentioning Witch Child, Adele. The women's art of quilting is fascinating and resonate powerfully with writing, both through the process of making and the symbolism contain contained in the patterning, not to mention the memories and associations held in the scraps of fabric used.

I recently re-visited Lucy Boston's house and thought that her winter routine (summer she was too busy in the garden to do either) of writing in the day and quilting in the evening perfect. No e mails, blogs or internet!

I like the sound of this. I've just ordered a copy to give to my mum for christmas, as she is a quilter. (and then i shall borrow it from her so can read it too..)

My previous comment got swallowed up by Blogger, who said (infuriatingly) Whoops, there has been an error. When several minutes of thoughtful posting disappear I would prefer something more tactful than the oh-so-jolly 'whoops!' Enough griping, however.
What I wanted to say is that I enjoyed this review, and enjoyed the book, too. I was most interested in the Quaker bit, being one myself, and I thought she handled this with sensitivity and realism. I did connect it with Ann Turnbull's 'Seeking Eden' so I am glad that Ann liked this book.. I gather Tracy Chevalier is in fact a long-term attender at a Quaker meeting, so, like Ann, she knows what she is describing!