A HUNGRY CHRISTMAS By Eleanor Updale

Merry Christmas, everyone.  I hope you are enjoying a stupendous feast today.  Of course, this year -perhaps more than most -  people are going hungry because of sickness or conflict.  So I thought I’d take a look at one such Christmas, if only to give us all a break from that 1914 football match which seems to have taken over all media outlets this week.
From September 1870 to January 1871, Paris was under siege by Prussian forces.  Almost fifty thousand civilians died, many of them through starvation.
Several foreigners were trapped in Paris when the Prussians swooped and, fortunately for us, an English language account of conditions in the city was published shortly after the war.  Henry Labouchere, a wealthy British journalist and former MP sent regular reports to his mistress during the war, and brought them together to form The Diary of the Besieged Resident in Paris, published in 1872.

All the railways had been disabled, and the roads were blocked, so the only way to get letters out was by carrier pigeon or hot air balloon.  The useless railway stations at the Gare du Nord and the Gare d’Orleans were transformed into balloon factories, and by the end of 1870, a daring postal service with fees and collection routines had been established, and Labouchere made extensive use of it. 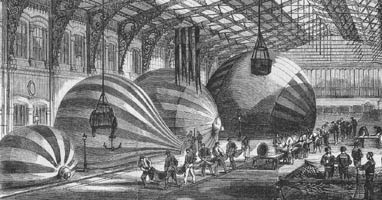 Here is part of  Labouchere’s account of Christmas Day, 1870

We are not having a “merry Christmas” and we are not likely to have a happy new year. Christmas is not here the great holiday of the year, as it is in England.  Still, everyone in ordinary times tries to have a better dinner than usual, and usually where there are children in a family some attempt is made to amuse them… Since the Empire introduced English ways here, plum-pudding and mince pies have been eaten, and even Christmas-trees have flourished. This year these festive shrubs, as an invention of the detested foe, have been rigidly tabooed. Plum-puddings and mince pies, too, will appear on few tables.  In order to comfort the children, the girls are to be given soup tickets to distribute to beggars, and the boys are to have their choice between French and German wooden soldiers.  The former treasured up, the latter will be subjected to fearful tortures.  Even the midnight mass, which is usually celebrated on Christmas-Eve, took place in very few churches last night.

And he spoke of his fellow ex-pats:

The English here are making feeble attempts to celebrate Christmas correctly.  In an English restaurant, two turkeys had been treasured up for the important occasion, but unfortunately a few days ago they anticipated their fate, and most ill-naturedly insisted upon dying.  One fortunate Briton has got ten pounds of camel, and has invited about twenty of his countrymen to aid him in devouring this singular substitute for turkey.  Another gives himself airs because he has some potted turkey, which is solemnly to be consumed to-day spread on bread.  I am myself going to dine with the correspondent of one of your contemporaries.  On the same floor as himself lives a family who left Paris before the commencement of the siege.  Necessity knows no law; so the other day he opened their door with a certain amount of gentle violence, and after a diligent search, discovered in the larder two onions, some potatoes, and a ham.  These, with a fowl, which I believe has been procured honestly, are to constitute our Christmas dinner.

Did you noise the reference to camel?  This wasn’t a joke.  The citizens resorted to killing and eating the animals in the zoo - thereby addressing the two problems of how to feed them, and how to feed the human population.  For the rich, this might mean an extremely exotic Christmas dinner.  Here is the menu for one: 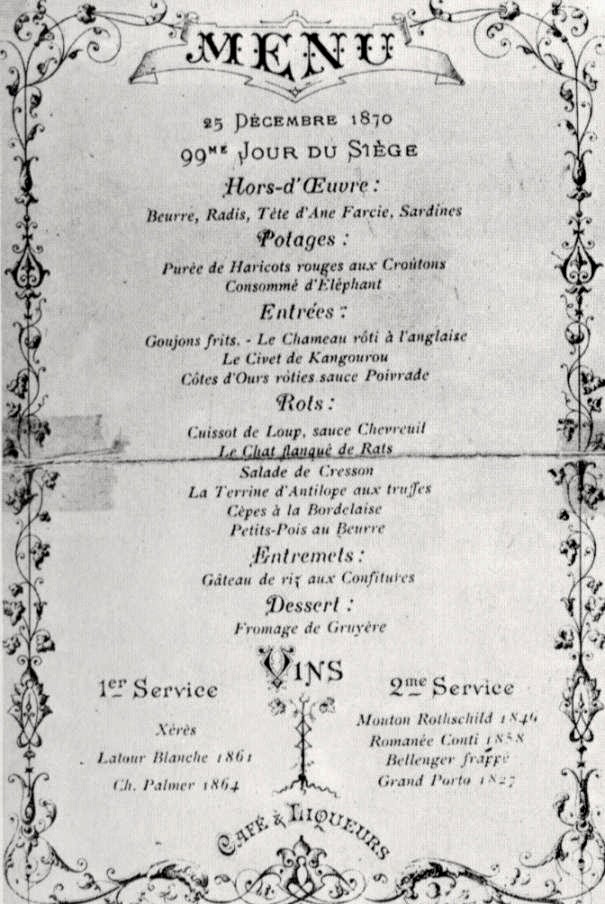 You will note the references to rats, kangaroo, and to ‘Elephant consommé.  The zoo's two crowd-pulling Elephants Castor and Pollux had been killed for food.

Eventually, Labouchere got to taste them:

Yesterday, I had a slice of Pollux for dinner.  Pollux and his brother Castor are two elephants which have been killed.  It was tough, coarse, and oily, and I do not recommend English families to eat elephant as long as they can get beef or mutton.

It is clear that, for a price, rich people could still eat.  But Labouchere, for all his wealth, was aware of the plight of the  poor:

It is very strange what opposite opinions one hears about the condition of the poor.  Some persons say that there is no distress, others that it cannot be greater.  The fact is, the men were never better off, the women and children never so badly off.  Every man can have enough to eat and too much to drink by dawdling about with a gun.  As his home is cold and cheerless, when he is not on duty he lives at a pothouse.  He brings no money to his wife and children, who consequently only just keep body and soul together by going to the national cantinas, where they get soup, and to the Mairies, where they occasionally get an order for bread.  Almost all their clothes are in pawn, so how it is they do not positively die of cold I cannot understand.
As for fuel, even the wealthy find it difficult to procure it.  The Government talks of cutting down all the trees and of giving up all the clothes in pawn; but, with its usual procrastination, it puts off both these measure from day to day.

Labouchere’s account is lively and amusing.  It’s hard not to take to him as you read. 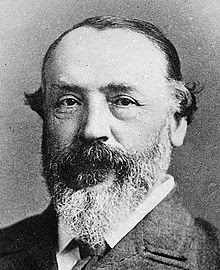 Some years after the siege, he returned to Parliament, and campaigned against fraud and corruption in public life.  However he was also profoundly opposed to women’s suffrage, and is credited/blamed, for the parliamentary amendment which outlawed consensual homosexual acts.  He lived in Pope’s Villa at Twickenham - rebuilt in High Victorian style, and still a splendid sight from the river today. 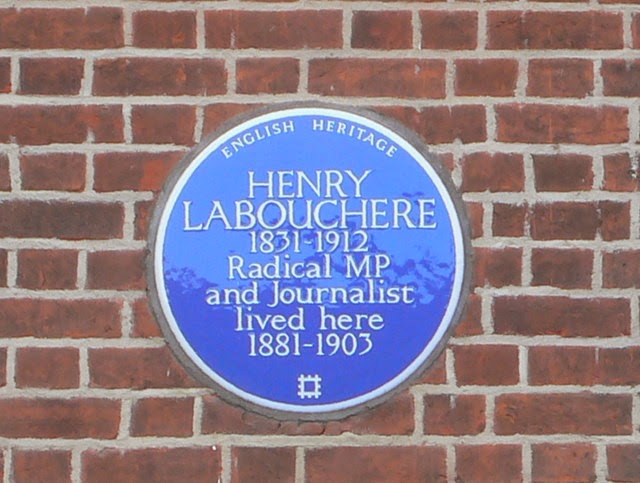 So we know that he recovered from his plight, but even so, It’s hard not to pity him, today of all days, when he wrote this, four days after Christmas 1870:

At my hotel, need I observe that I do not pay my bill, but in hotels the guests may ring in vain now for food. I sleep on credit in a  gorgeous bed, a pauper,  The room is large,  I wish it were smaller, for the firewood comes from trees just cut down, and it takes an hour to get the logs to light, and then they only smoulder, and emit no heat.  The thermometer in my grand room, with its silken curtains, us usually at freezing point.  Then my clothes - I am seedy, very seedy. When I call upon a friend the porter eyes me distrustfully.  In the streets the beggars never ask me for alms; on the contrary, they eye me suspiciously when I approach them, as a possible competitor…As for my linen, I will only say that the washerwomen have struck work, as they have no fuel…For my food…Cat, dog, rat and horse are very well as novelties, but habitually, they do not assimilate with my inner man.

Whatever the less attractive aspects of Labouchere's character, today of all days we should rejoice that when the siege ended, he got away to Versailles:

I am not intoxicated, but I feel so heavy from having imbibed during the last twenty-four hours more milk than I did during the first six months which I passed in this planet, that I have some difficulty in collection my thoughts in order to write a letter.  Yesterday I arrived here in order to breathe for a moment the air of freedom.  In vain, my hospitable friends, who have put me up, have offered me wine to drink, and this and that delicacy to eat - I have stuck to eggs, butter, and milk.  Patts of butter I have bolted with a greediness which would have done honour to Pickwick’s fat boy.

Which brings us back to a more traditional view of Christmas.  And here in your cracker is Mr Wardle's song from The Pickwick Papers.  Just to cheer things back up: 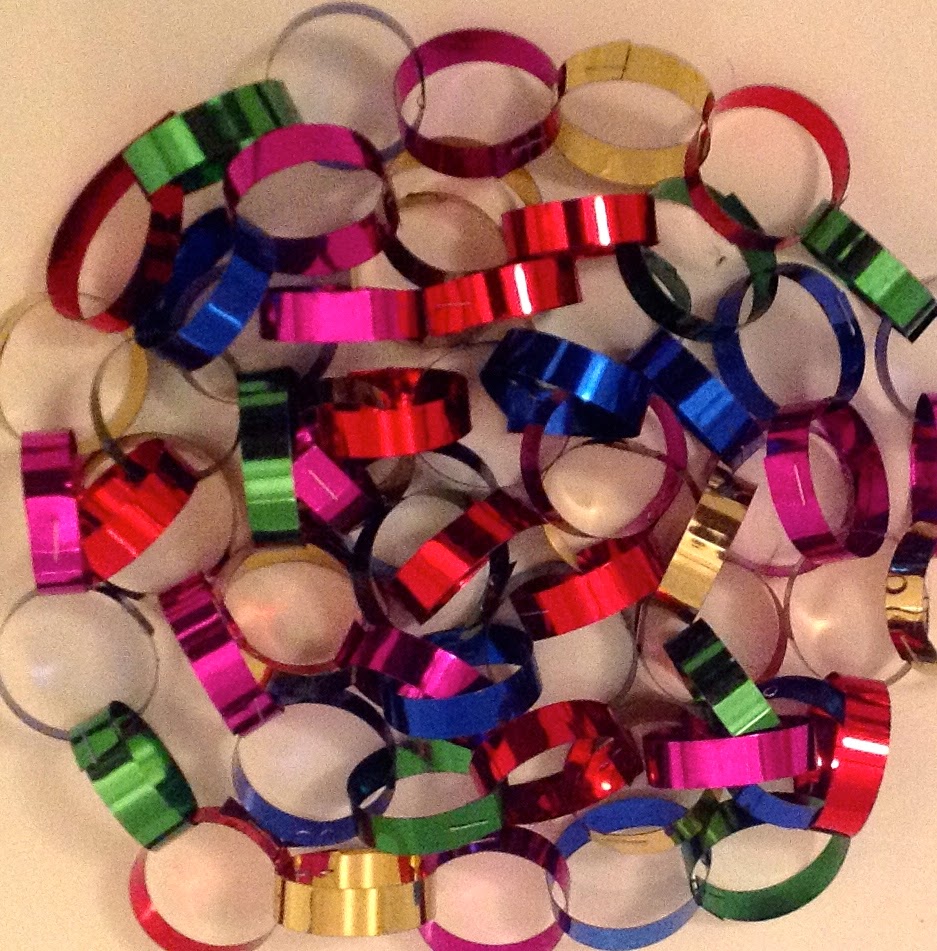 Very interesting - so many things one knows so little about!