The Day the Sun Stands Still, by Laurie Graham

Do you know where you are? At your kitchen sink, or as you wait at the bus stop, can you say without hesitation where the sun will rise?


One of the most interesting books I read this year was Graham Robb’s account of the sun-centred world of Celtic civilisation, The Ancient Paths. It was a world in which awareness of the sun and its path was embedded even in the language. In the Gaulish language that was spoken by the Celts between 600 BC and 600AD words like ‘left’, ‘right’ and ‘behind’ carried far more meaning than they do for us today.  Dexsuo, for instance meant ‘behind’ but more specifically it signified ‘Where the sun sets.’ Dheas meant ‘to the right’ but more specifically ‘to the south.’  In other words all of Celtic life and language were ‘oriented’ to face the rising sun.


Which brings me to my theme today: the winter solstice.  A few days when sol stit, the sun stands still.

To people who were so conscious of the sun, its annual, predictable path was of practical use. Towns and buildings were laid out in alignment with the cardinal points and the solstices were the best time to take accurate bearings. Newgrange is aligned to sunrise on the winter solstice, Stonehenge to the solstice sunset. 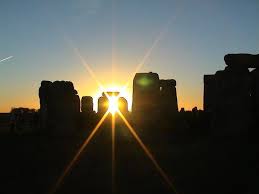 But the winter solstice was more than a surveyor’s tool. It must also have been a source of anxiety.  As people watched the sun rising further and further to the south-east and setting further and further to the south-west there must have been a few doom-mongers who said, ‘What if it gets stuck? What if it never comes back to us? Is it any wonder that in so many cultures mid-December became a time of anticipation and preparedness (what women’s magazines now call The Countdown to Christmas) followed by celebration and relief. The heavens are on the move again. The sun is reborn. A Son is born.


From the old winter festivals it's possible to detect fragments that have adhered to our Christmas customs.

The Romans celebrated Saturnalia, at which the season’s greeting sounded something like ‘i-Yo!’ Familiar? Ding dong merrily on high, let steeple bells be swung-en. And io-io-io, by priest and people sung-en.

The Germanic and Nordic peoples celebrated Yule, a feast that continued as long as the ale and the meat lasted and the Yule log (probably more a tree trunk than a log) burned.  Light, warmth, the rare treat of eating one's fill. We can still hear echoes of the ancient fears and joys of the winter solstice, even in these days of electric candles and festive filo parcels. 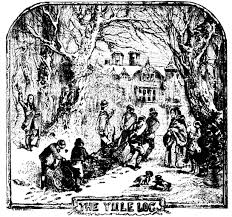 I always like to add a sound file to my December post, and what more appropriate than the macaronic Boar’s Head Carol. Its words have only a glancing connection with the Nativity and even though it is sung every year in the privileged splendour of the Boar’s Head Feast at Queen’s College, Oxford, to me it seems to belong firmly to a pre-Christian time, to a forested world of wild beasts and long dark winters. Here it is, performed very beautifully by Magpie Lane.
Posted by Laurie at 01:30

What a fascinating post, Laurie. We have wild boars running amok about our olive farm. This post might give my husband ideas for our Christmas dinner. I enjoyed the carl. Thank you.

When we had a house in the Dolomites the destiny of amok-running wild boar was our neighbours' dinner table, particularly if the aforementioned boar had been caught vandalising the onion patch. Don't forget the bay and rosemary!

Lovely seasonal post, Laurie. I love the Boar's Head Carol - and what wonderful pictures you've chosen to illustrate it.