THE MERCHANT OF VENICE, AND ME by Penny Dolan 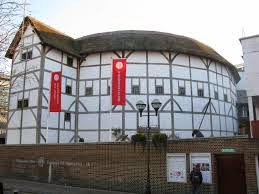 Just over a week ago, at a secret venue close by the Globe in London, the History Girls had a Famous High Tea. The setting was beautiful, the cakes delicious and the company delightfully chatty.  What with that, and meeting up with two writer friends earlier, I’d had an enjoyable day.

More was to come. I had a ticket for The Merchant of Venice that evening, not at The Globe nearby, but away past Angel at the Almeida Theatre, Islington.

Now, The Merchant and I have an odd history. Years ago, it was the play upon which my schoolgirl hopes were dashed. I was not chosen to play Portia, but cast as the clown Lancelot Gobbo, which may have damaged my dreams of allure ever since.
However, as this was the very first night, I truly wasn’t sure what kind of production I’d be seeing but “very different” was what I’d been told. 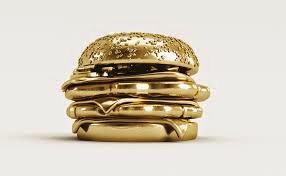 Yes, this was certainly not the traditional Shakespeare performance. Presented Las Vegas style, the show blazed with colour, music and energy.

The stage was a glamorous blue and gold casino, and the cast, already on stage, were a whirl of gambling and gaming. Yet Antonio’s opening line – his melancholy sigh – perfectly caught the gambler's sense of ennui.

Played by Susannah Fielding, Portia was seemingly a drawling Southern heiress, much given to pouting and tossing her huge cascade of blonde curls, while those casket scenes were rounds of “Destiny”, a game of televised chance and "romance". The suitors were clearly there for the celebrity and the money: Morocco as a loud-mouthed boxer in gold pants, and Aragon as an ageing Latin lover with flounced sleeves, caring only for their own persona "on screen" - and the money.

The overblown, flashy glamour was, bit by bit, pierced by the asides and cruelties within this problematic play. Portia’s father had bound his daughter – and her most attractive fortune - to a game of chance that could be lost as well as won. Ian McDiarmid acted Shylock as a suave, ageing business man, his dull daughter only important as his stolen flesh, the injustice to be balanced against Antonio’s flesh.

Slowly, the familiar plot of the Merchant unfolds – and the pound of flesh scene is chilling - but this version has no fairy tale ending. Despite the glitz, nobody comes out well. What does the play talk about but marriage as a way of making money? Of private feelings subsumed into an acceptable public face? Of gambling that is so foolish it could almost be a death wish? Of vanity, celebrity and self-importance? Of the relationship between men and men, and men and women? Or of cruel desperate vengeance and Christianity’s taunting hatred of the Jews?

This raucous, sometime carnival of a play managed to carry every bitter theme from the past of history into present feelings. None of the players are noble and nobody reaches happy endings, not even the lovers. This Merchant of Venice was a production that I’m still thinking about and will for some time.
Originally produced by Rupert Goold at Stratford four years ago, this interpretation held two sweet surprises for me. One was how well Shakespeare’s lines fitted the South American rhetoric, especially in the vindictive trial scenes. When one thinks of the journey that the English language travelled, how could it otherwise?

And second was this casting of Lancelot Gobbo. He had become an overblown Elvis impersonator, singing his way through the show. The only one largely unharmed..

Ah, maybe that was how I should have played him? 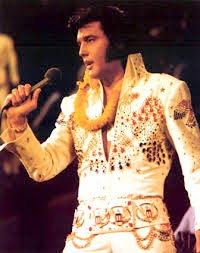 Email ThisBlogThis!Share to TwitterShare to FacebookShare to Pinterest
Labels: Shakespeare, The Almeida; Penny Dolan, The Merchant of Venice

A problematic play indeed. When I studied it at uni, we compared it with Marlowe's Jew of Malta and really, there's no connection. We agreed that Barabas was a true villain, while Shylock was ripped off. This is because Shakespeare simply can't create a two-dimensional character. Jessica trades her mother's ring(chastity) for a monkey(lechery).

The most interesting production I saw was performed at the Cameri Theatre in Tel Aviv, in Hebrew. It was done in modern dress. Morocco was an Othelloesque Moor( the same actor played Othello the following week). When he is lamenting losing Portia, his four black-veiled wives peer in and he chases them off angrily. Aragon was a matador who did a flamenco dance. Jessica and Lorenzo were hippies. And Antonio's feelings for Bassanio were, it was implied, more than friendship. In the last scene, as the happy lovers go off to bed, he is left alone on stage. He drops his letter, places his head in his hands and mourns. This was a follow-up to the opening scene, in an outdoor cafe, where his friends eat his lunch, then leave him to pay the bill - as he does the whole play.
Oh, and Launcelot Gobbo had an Italian accent. 😊
Of course, there's that wonderful Victorian era version with Laurence Olivier and Jeremy Brett...

Both these versions of the play sound amazing - I've never seen it played anything but straight. It was certainly difficult to teach.

Penny, I can absolutely see you in a gold and white Elvis jumpsuit. No question!

Heavens! Normally I'd have trouble with that kind of production, but what you say does make sense. And I would pay good money to see you in an Elvis suit!

I saw this production in Stratford with Patrick Stewart as Shylock and absolutely hated it, particularly Portia and Nerissa as Texan game show hosts.

You can overdo the playing around with Shakespeare. But Patrick Stewart as Shylock would have been worth seeing. I believe Dustin Hoffman played the role once and a snippet shown on TV suggested he was amazing.

Sue, I think that aspect of Antonio & Bassanio's relationship became even clearer in this production too. Portia, despite all her efforts, isn't getting much of a deal, even with her lover.

I just bought tickets based on your post. But no pressure. :)