You couldn't make it up: Britain's Bloodiest Dynasty by Mary Hoffman

Did you see the first episode of Dan Jones's Britain's Bloodiest Dynasty on Channel Five last Thursday? Even if you didn't I expect you can guess who they were (though strictly speaking "England's Bloodiest Dynasty," which doesn't have the same alliterative ring).

Yes, it's our old friends the Plantagenets and Dan Jones knows more about them than most. His book of that title, first published by Harper Press in 2012, is now available as a chunky (600+ pages) paperback. Very accessible narrative of the Kings from Henry the Second to Henry the Fourth and all for just under a tenner.

With the discovery of Richard the Third's bones, apparently it's official that the Plantagenets have knocked the Tudors off the top spot in popular history. This is according to Chris Skidmore, MP, who told the Henley Literary Festival that he could get a book contract in 2009 for his latest book, on the battle of Bosworth Field only by adding a subtitle of "the Birth of the Tudors." The wars of the Roses were not a "sexy topic" then. But that's all changed.

As Dan Jones says, they were the family who "turned England from a war zone into a European superpower.

He has followed up his first volume with a second, The Hollow Crown: The Wars of the Roses and the Rise of the Tudors, oddly published by Faber rather than any imprint of Collins, which begins with another Henry, the fifth of that name and finishes with the notorious eighth.

But with the new Channel Five series, Jones is back with his first Henry, Henry the Second, the one we know about from the murder of his Archbishop and one time friend, Thomas Becket. 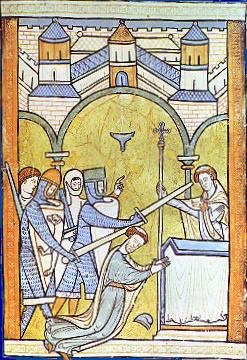 "Betrayal," the first episode, starts well with young Henry (aged only 20) fighting with his barons for dominance. The historical re-enactments are well done and show the king, eventually father to four sons and two daughters, crowning his eldest son (if you leave out William, who didn't make three years) as the next king before his own death.

Henry, the "Young King" was resentful that his father didn't give him more lands and power and did in fact predecease his father. But before that three of the four sons (though Geoffrey is not mentioned) had fallen out with their father, encouraged by their formidable mother, Eleanor of Aquitaine. The Young King had even thrown in his lot with Louis the Seventh of France, Henry's old rival and Eleanor's former husband.

The quarrels with his wife and sons led to the long imprisonment of Eleanor until her favourite son, the next Plantagenet king, Richard l, released her. I would have liked more about Eleanor but this is a show about blood and battles, treason and murder, and we did have Helen Castor's She-Wolves not so long ago.

Dan Jones made the point that although Henry ll did some good things, including inventing the Civil Service, what he is remembered for is the murder of Thomas Becket, at which the outrage in Europe "went viral."

In 1174, Henry went on a barefoot pilgrimage in Canterbury in an attempt to wipe this crime from people's memories. He was scourged by a hundred monks but in modern terms that would have warranted a small paragraph on the inside pages, compared with a screamer front page headline.

And in 1189, Henry was again at war with his son Richard and rode out to meet him but died two days later.

Asked how he had chose the subjects for the four episodes of Britain's Bloodiest Dynasty, Dan Jones replied that he had chosen "the formative stories, the human stories."

The remaining episodes feature Henry the Third and Simon de Montfort; Edward the Second (yes, even that infamous red hot poker) and Richard the Second. Throughout the members of the English Court speak french, with subtitles. It is only when Henry Bolingbroke claims the throne that it is done in English.

Dan Jones is a personable presenter and with his look and vocabulary is clearly intended to introduce a younger audience to these fascinating characters and stories. Much has been made of the series being on Channel Five rather than, say, BBC4.

I wonder if the series would have been made or at least made in this way - "big, bloody and thrilling" - if it hadn't been for the success of the TV adaptation of George R. R. Martin's A Song of Ice and Fire (now known by the title of the first book in the sequence, 'A Game of Thrones.') Martin is known to have based his epic power struggle on the Plantagenets, a case of life being stranger than fiction. 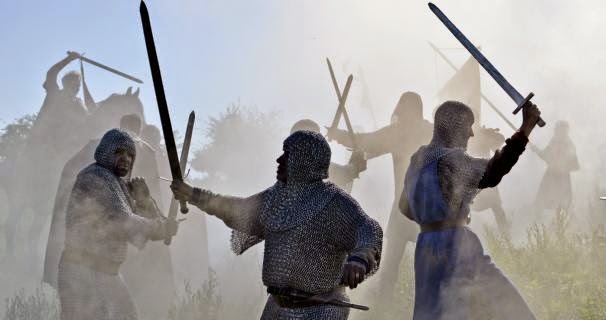 Dan Jones is our December guest on the History Girls (29th), when he will be talking about his new book on Magna Carta.

As I'm a Jew, Henry II is my favourite of the Plantagents, the only one who treated the community decently. By the time of Edward I, the community ad been squeezed dry and could be kicked out.

I am sorry to say that I thought the re-enactment was truly awful. The kit specs bore no resemblance to what 12th century people would have worn - particularly the military gear. That helmet on Henry II at the beginning was either fantasy or much later period and immediately set the wrong tone. Henry himself was incongruously protrayed at 20 by a man twice that age with greying dark hair. Henry himself at 20 was a vibrant, energetic red-head.
You would have thought with the intention to rack up the drama, Henry II's death scene would have been protrayed as it was with the defeated king left lying naked, alone and bloodstained from a final haemorrhage while the servants ran off with the contents of the room and everyone of authority was elsewhere. Instead the documentary showed the world and his wife reverencing his clothed form. That didn't happen.
Since there was so little time to tell the story, Henry's son Geoffrey barely got a mention and you'd never have thought Henry and Eleanor had daughters who made powerful and strategic marrigaes across Europe.
One of the positives of the documentary is that Dan Jones paints Henry II's controlling nature very well indeed. He's got the essence of the man and there are no rose-coloured spectacles.
I am currently reading Dan Jones' book on the Magna Carta for later events on The History Girls and that is excellent as far as I've read.

Enjoyed your piece very much, Mary - it's made me want to watch this (although I've always been a bit of a fan of Richard III and the Plantagenets, after reading Josephine Tey's 'The Daughter of Time'). Great comments, too, Elizabeth!

I also watched Britain's Bloodiest Dynasty and although some of it grated on my historian's ears, I can see the validity of presenting history in a way that might appeal to a mass audience addicted to A Game of Thrones, although fantasy will always be more exciting than historical reality where there are no dragons and the bedroom door (or medieval equivalent) is kept closed.

Didn't see the programme but liked your post, Mary! And as I am not a Game of Thrones fan, I like to take my Plantagenets neat, as it were!

Part of my O'level literature was Shakespeare's Richard the third, I adore the language and the history (yes I know now how it was entertainment etc) I went on to read daughter of time! which also gripped me, and I must confess a fondness for the whole era, the french rule and the changes by Richard, and the mystery of the princes! I will be watching to see what more there is, Thank you.