THE PIERCED HEART by Lynn Shepherd . A review by Adèle Geras

Lynn Shepherd has just sent me this piece she's written about THE PIERCED HEART....sorry it wasn't here in time for the first appearance of this post!


The Pierced Heart:
A sequel, a star, and a strange tale

The Pierced Heart is my fourth novel, and the fourth to feature the Charles Maddoxes, my two 19th-century private detectives. When I wrote my first book, Murder at Mansfield Park, way back in 2008, I had no idea of turning the idea of a ‘literary mystery’ into a series. It just seemed an enormously enjoyable ‘conceit’ to work with another great work of fiction, and give the reader the double pleasure of a satisfying murder, and the chance to revisit the world and words of the incomparable Jane Austen. But after Murder at Mansfield Park came out people started to say they’d love to see Maddox back, and in Dickens’ bicentenary year I sent his great-nephew, the younger Charles Maddox, to walk shoulder to shoulder with Dickens through Victorian London. Since then I have thrust sent him head-first into the emotional maelstrom which was the lives of the Shelleys in A Treacherous Likeness, and finally and most recently confronted him with his most fearsome foe of all, the Baron Von Reisenberg. Why so fearsome? Because this new book takes its inspiration from Bram Stoker’s Gothic classic, Dracula.

Vampires are, of course, the gift that keeps on giving – look at True Blood, or The Originals, or The Twilight Saga, or the latest Jonathan Rhys Meyers NBC series. The list goes ever one and on. And I’d like to think The Pierced Heart has its own contribution to make, not just by taking the Dracula story back to its literary roots, but by recasting the vampire theme in terms of the clash of science and superstition in the middle of the 19th century.

And now we come to the rather strange tale of the novel’s fate in the UK.

I had a two-book deal in the UK for Tom-All-Alone’s and A Treacherous Likeness, and when that came to an end I felt my relationship with my publisher had run its natural course, and I wanted to move on. My agent loved The Pierced Heart, as did my US editor, so when it was sent out to UK publishers in the summer of 2013 I was in an optimistic frame of mind. As optimistic, in fact, as I had ever been since I took up this ego-bruising game. But even though two dozen or so houses looked at it, none of them said yes.

So what, you ask, is the problem? Is it a lack of coverage? No, I don’t think so, since Tom-All-Alone’s was a book of the year for both the Spectator and Sunday Express in 2012, the Daily Mail called A Treacherous Likeness “an absolute must”, and it was a historical novel of the year in the BBC History magazine list for 2013. Is it the quality of the writing? Again, I don’t think so – it’s had a wonderful quote on Twitter from Ian Rankin, no less, and a Kirkus star (“another tour de force from Shepherd”). There were some UK editors who just didn’t take to it, as there will always be, but other comments ranged from “this is very good stuff” to “read aloud on a long car journey and had the family hooked” to “a very enticing atmosphere of menace and mystery. All the elements one could possibly wish for in a novel of this scope.”

All of which leads me to deduce, in a mixture of bewilderment and sad frustration, that the real problem here is that The Pierced Heart features the Maddoxes once more. I’ve made a huge effort to ensure the book can be read in its own right, with no knowledge of the preceding novels, but it’s the ‘sequel thing’ that seems to have been its downfall in the UK. But why? Why should that make the slightest difference to a publisher? Who cares what logo is on the spine, as long as it sells?

In fact, you might even think (as I did, in my naïveté) that an established character would be an advantage, as much of the hard PR graft is already done. But apparently publishers don’t want to take on a series started elsewhere because they see themselves as ‘brands’. Now I may not know much about publishing, but I’ve worked in marketing and communications for over 15 years, and I know a brand when I see one. Brands are things people buy, so an author is a brand, if they’re successful enough, but the publisher is only ever the vehicle for that brand. And the proof of that contention is that no-one has ever bought a novel because they liked who published it. I don’t go onto Amazon or into WHSmith thinking ‘that last book from [insert publisher’s name] was really good, I think I’ll see what else they’ve done’ and I bet you don’t either. In fact, I doubt most people outside the industry could even tell you who publishes their favourite authors. Because surely the only thing that matters to readers – and has ever mattered - is the quality of the writing.

So what next for me? Perhaps a new direction next time - perhaps something that’s not historical. And maybe, just maybe, Charles Maddox could be back one day too, if I can find a UK publisher to take him on. After all, stranger things have happened….

UK readers can buy The Pierced Heart in sterling, from Amazon UK.

I've written about Lynn Shepherd's novels before on this blog and here is a link to my post about her book A Treacherous Likeness.

I am a big fan of her work, because what she does seems to be something especially designed to appeal both to fans of existing works of literature and also to lovers of a good thriller. She's created a detective called Charles Maddox (who will, I hope,  be played by Benedict Cumberbatch in any future screen adaptations) and Charles winds his way in and out of the world created by other works of literature. In Tom-all-alone's, he wound his way in and out of the events and characters of Bleak House. In A Treacherous Likeness, Shepherd wrote of  the comings and goings of the Shelley circle and especially the events surrounding the famous night when Frankenstein was conceived.

It was obviously only a matter of time before she turned her attention to Dracula.  In The Pierced Heart, though, she goes one better. Not only is this a novel which addresses the matter of vampires, (very popular in the 19th century, as witness the illustration below)  it's also one that deals with many other interesting topics in a way which ups the entertainment value no end. 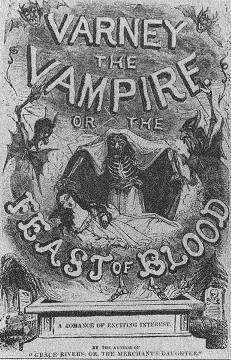 Perhaps because vampires in various guises are now so popular, Shepherd adds something that's equally spooky and unsettling while being the antithesis of the supernatural: the scientific.  There's an author's note at the back of the book (which I urge you to read as I did at the very end so as not to spoil any of the fun you're going to have along the way, shivering and shaking...) in which she explains very thoroughly how scientific advances in the late 19th century fed into this story of  serial murder, bloodsucking, illusion, phantasmagoria and so forth. 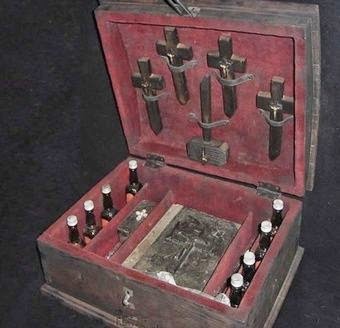 
The story starts with Charles, our hero, going to look at manuscripts on behalf of the Bodleian Library in a castle belonging to Baron Von Reisenberg. Even though we think we know precisely the kind of place we're going to see, and exactly what Von Reisenberg will be like,   Shepherd manages to make all she writes about seem both new and thrilling. Events, atmosphere, character are all conveyed so well that even the most jaded reader of Gothic will be excited. There are shocks, revelations, discoveries of a most gruesome sort and we are left reeling at the end of Part One.

Events then pass to the Journal of a young woman called Lucy.  The novel moves from her account of matters to what is happening to Charles.  His narrative takes place in London.  The Great Exhibition is on and is currently attracting thousands to look at the newest examples of scientific discovery. Meanwhile, the police are baffled by a  serial killer who rips the throat out of poor prostitutes....the stage is set for a non stop action packed eventful and thoroughly gory and sensational story of love, manipulation, sinister experiments, waxworks, graveyards, sea mists, darkness, illusion and of course, the folklore of vampires.

I do urge anyone who is interested in any aspect at all of magic, illusion,  mesmerism and of course the original Dracula, to read The Pierced Heart.  It's not published in this country (why on earth not, publishers? Beats me!) but you can get the US edition from Amazon. 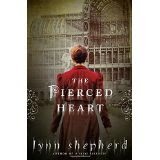 I loved A Treacherous Likeness, but I'll have to get my courage up before I read this one, Adele.

I do wish I had a vampire-slaying kit, especially one lined in velvet: so much more practical than half the presents one gets at Christmas.