You have to feel sorry for Étienne de Bourbon, a medieval Churches Inquisitor, who was sent to a remote part of Lyon in France to try to stamp out pagan customs there. He became so encouraged when women earnestly assured him that they were not praying to the old gods, but to a beloved local saint, St. Guinefort, who had wrought miraculous cures for their children. Étienne really thought he was making great progress until he started asking questions about this unknown saint and discovered the saint was a dog.

Locals told him that a knight had ridden off one day leaving his faithful hound, Guinefort, to guard his infant son, and in common with similar legends from all over Europe from Saxon times, the knight had returned to find the cradle overturned, baby missing and blood on the teeth of his dog. In horror, believing the dog had devoured his son, the knight drew his sword slew the animal. Moments later, he heard the child crying and found him unharmed, with a dead viper lying close by, bearing the teeth-marks of the faithful hound. In grief, the knight buried the dog down a well and planted a grove of sacred trees around it.

Miracles began to be associated with the dog and locals declared the dog a saint, whose feast day was celebrated on 22nd August. Women brought ailing infants to St Guinefort’s resting place and made offerings of salt and items of their infants’ clothes. They then passed the child between two tree trunks 3x3 times - the magic number. Though, according to the disgruntled Étienne, the mothers didn’t gently ‘pass’ the child, but threw the baby to a woman on the other side of the trees who would then toss it back.

Ailing infants were often thought to be changelings, the healthy babies having been stolen by the devil, faery
folk or in this case forest fauns. So in Lyon, after the mothers had prayed for the return of their child, the changeling would be left alone in the sacred grove beneath burning candles, to await the exchange with the real baby. This, Étienne claimed, often resulted in infants being burned. But it was a widely held belief across Europe that if a mother whipped the changeling baby or threatened to toss it in the fire, the faery folk would hear its screams and rush to rescue it, returning the stolen child. So if the mothers really were doing this at St Guinefort’s well, perhaps it was because they were trying to make changeling babies cry or appear to be in danger in order to force the fauns to return the kidnapped child.

Whatever the truth, Étienne declared that a dog couldn’t be a saint, so it must be a heretic. He had the dog’s bones dug up and burned on a pyre made from the trees he felled from the sacred grove. But this only fuelled the flames of the local women’s devotion and many still remained faithful to St Guinefort right up until the early twentieth century.


With its sacred grove and holy well, the customs surrounding the dog-saint are probably a direct survival of ancient pre-Christian worship on this site, which later acquired a veneer of Christian elements. But it proved remarkably enduring in spite of the Church’s opposition.

Another doggy saint was the better-known St Christopher or the cynocephalus (dog-headed) saint.
According to the English martyrologies, St Christopher came from a race of people who were all half-hounds. He was described as having the head of a hound, long hair, bright eyes and teeth as sharp and strong as a boar’s tusks. They fail to mention a wet nose, but otherwise he sounds remarkably healthy in dog terms. Obviously his diet of ‘human flesh’ suited him. There are numerous different legends about his conversion, one saying that having discovering ‘the devils’ he served were afraid of Christ, he decided to serve the stronger master. On his conversion, his head was transformed and he was so handsome that two women tried to seduce him in prison. The bestial pagan man becoming fully human was a useful allegory for the Church.

Interestingly though, the Eastern Orthodox Church reverses the dog-head legend of St Christopher. In their version he was a remarkably good-looking youth and women were forever throwing themselves at him, so he prayed that he might be made less attractive to women and God answered his prayers by giving him a dog’s head.

Curiously, neither St Christopher nor St Guinefort is the patron saint of dogs, as you might expect. That
honour goes to St Hubert, also the patron saints of hunters, who protects healthy dogs and St Sithney who cures mad dogs. Legend goes that it was revealed to St Sithney that he was to be made patron saint of girls. He begged to be excused on the grounds that he would never get any peace, because girls would be praying to him night and day for handsome lovers and pretty clothes. Sithney declared that ‘mad dogs’ would be less trouble. So from then on, sick and mad dogs were taken to drink from his well, known as the well of St Sezni.

But sadly neither St Sithney nor St Hubert was able to protect one poor dog that lived in Hanley Castle, 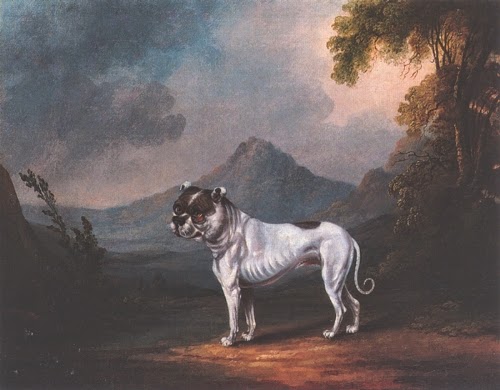 Worcestershire. At the time of the civil war, the castle was in the hands of an ardent royalist, Thomas Holroyd who own a one-eyed bulldog called Charlie, named after the king. In 1651, the Roundheads seized the castle and, discovering the dog’s royalist name, hanged the poor bulldog from an oak-tree. Holroyd, though arrested and charged with treason, managed to survive and afterwards regain much of his property, but it is said the ghost of the bulldog forever haunts the village searching for his master.

I love the story of St. Guinefort - there's a fantastic French film set in the 13th century that's based on the legend. It's also one of the best film treatments of medieval religion I've ever seen. Check out Sorceress (Le Moine et la Sorciere), 1987, directed by Suzanne Schiffman.

Didn't know that about St Christopher having a dog's head. I used to think te story about the loyal hound was from a story about Prince Llewellyn's dog Gelert, till I realised it was a folktale from a lot of countries. Hadn't heard of a French version.

Actually, I can imagine it even here in Australia, as a nineteenth century bush story, perhaps by Henry Lawson. It's very universal, isn't it?

Tough times for babies! I wonder why there are no cat saints?

There's Saint Gertrude of Nivelles, patron saint of cats. Though, perhaps to her regret, she only has a human form. Maybe a tail under her habit?

Not even a saint could live up to a cat.

That sounds like the Welsh legend of Gelert, except it's a wolf in that tale. Funny how these stories cross cultures and countries.