BEHIND THE SCENES AT THE (FITZWILLIAM) MUSEUM by Adèle Geras 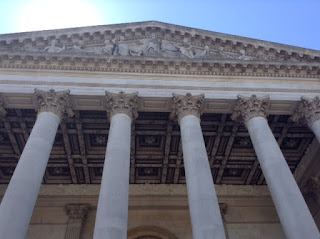 This is the faccade of a part of the Fitzwilliam Museum in Cambridge. Almost the first thing I did when we moved to this city in 2010 was to join the Friends of the Fitzwilliam. The museum is known as 'a collection of collections' and anyone who's ever been there will know that it's a huge depository of all things interesting and beautiful.

The Museum puts on very good  exhibitions. TREASURED POSSESSIONS was recently a great favourite with all who visited and I've loved Edmund de Waal ceramics, water colours, art from China and Japan and many, many other shows.

The Friends are a wonderful organisation. I'm told that the Fitzwilliam was the first museum to have such a group attached to it and that it was founded in 1909. I had a reason for joining quite separate from supporting my local museum.  The Friends regularly take trips to great stately homes and other interesting places and because I don't drive, I'm always happy to join these outings. I've seen some glorious places over the last five years. 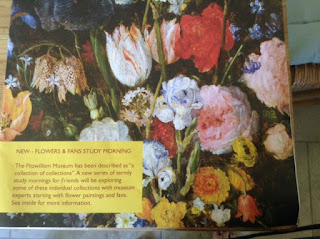 But as well as jaunts and outings, the Fitz does a great job of putting on workshops for the general public, including children and also lays on Study mornings for the Friends from time to time. I couldn't resist the poster advertising the Flowers and Fans study morning in June and it turned out to be a most enjoyable and fascinating occasion. 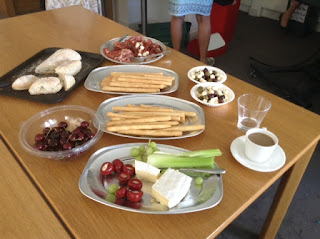 First things first: coffee and refreshments in the Meeting Room, provided by the Friends' committee. Here are two photos, which don't show the lively chat and friendly faces of the people attending. 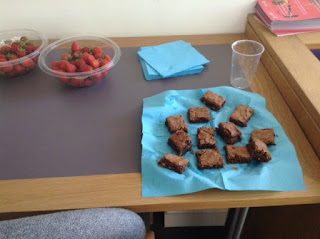 On the morning we were there, the Museum had taken delivery of a boxes and boxes of 18th and 19th century fans, sent from Christie's the auction house. We weren't allowed to take photos of those because they were so new that they hadn't even been 'checked in' so to speak. It was a privilege to hear Vicky, Eleanor and Amy telling us about them and the photos you see of fans here are from the permanent collection, taken later on after the Study Morning was over. I've put them in  mainly as decoration to break up the text,  and didn't even take down details of their provenance. 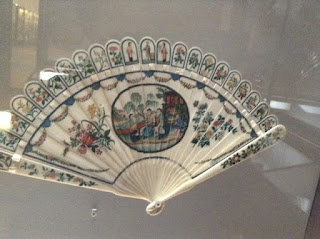 I've adored fans from a very early age. I can remember folding pieces of paper into a kind of concertina to make a rudimentary fan of my own, but real fans, fans made of ivory or feathers or silk painted with flowers were a part of my childhood. My mother liked fans and had a few which I was allowed to play with when I dressed up. I suspect that the ones I was enjoying were past their best.

Fans were at their most fashionable during the 18th century. French Huguenot fan makers came over to London and flourished there. Ladies in England took to them with great gusto and there was a huge variety of patterns and pictures to choose from. The Language of Fans is well known. Joseph Addison,  founder of the Spectator magazine, wrote "Women are armed with fans as men with swords and sometimes do more execution with them."


There was a huge variety of decorations available to the fan designer. Flowers, Chinoiserie, figures from mythology: anything that could be depicted on a fan was depicted. Some of the ornamentation was quite risqué. One that had been unpacked on the morning we were there was printed all over with verses.  It was called The Ladies' Bill of Fare and described the various men you could hope to snare. I wrote down one  of the quatrains:

"To plague and please all womankind
Here's gallants sure aplenty.
Chuse then a beau to suit your mind
Or change till one content ye!" 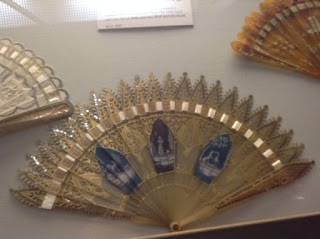 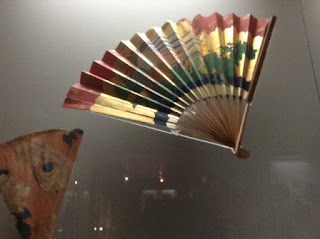 After the fans, we went through the Museum and into one of the back rooms; the kind of place which is so fascinating to be in that the things you're looking at are only part of the fun. Again, we weren't allowed to photograph anything, but imagine a room with many windows and rows and rows of display drawers and books and files, which have to be taken out in order to be viewed. We were looking at the flower paintings in the collection and all I have in my notebook now is the names of the artists. Some, like Redouté are well-known and many more are less famous: Jean Baptiste Pillement, Maria Sybilla Merian,  Antoine de Pinet, Bosschaert, Mary Moser and many others.  Henry Broughton, Lord Fairhaven was an important collector of flower drawings and paintings and his collection is here in  the Fitzwilliam. Here is a painting (not in the Fitzwilliam)  by Bosschaert: 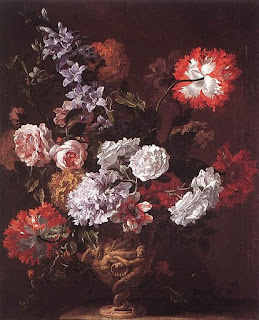 The Cambridge Botanic Gardens are just up the road from the Fitzwilliam and those are full of beautiful plants and flowers. Here was an echo of  the natural world.  In this room we found a garden on paper, held in albums so that the colour of each bloom is preserved in the best possible conditions.  Flower painting was an art that very many young ladies took up as a hobby and this is one reason why there are so many accomplished paintings of this kind.


The Fitzwilliam Museum is a real treasure house and I do urge anyone who is within easy reach of Cambridge to come and visit. You are sure to find a collection among the collections which will suit you.  There really is something for everyone within its walls.  It's shut on Mondays but any other day it makes a terrific place to visit. And though you won't get Friends' brownies when you visit, the Café  and shop are both superb.

I had a notebook with me that day and I'm going to end with a quotation I wrote down carelessly without recording the name of the person who wrote it.  I don't know exactly why I love this so much, but I do, so these are the words I will leave you with.
"La couleur bleu n'existe que dans la tête du peintre." (The colour blue only exists in the painter's head.)

I love the crispness of both the quatrain and Bosschaert's petals. Thank you, Adele!

And I love the quote from Joseph Addison!

Lovely post, Adele. How lucky you are to live near enough to be a Friend.

I Know! The whole of Cambridge makes me feel very lucky indeed. Thanks for your comment...

And thanks to you, Sally!

Adele, I think the "blue" quotation is Henri Matisse. I am very fortunate here on Côte d'Azur to be surrounded by marvellous museums with exhibitions for artists' work but nothing that offers such a broad picture of all these Treasured Possessions. Thank you

Thanks for this, Adele! I love the Fitzwilliam - so I set Slightly Jones and the Cambridge Mummy there - have to do research trips to write historical fiction, right?

Ah, maybe, when I grow up, I'll join the Friends too? Thanks, Adele.

Fascinating Fans at the Fitz!

How wonderful! Loved the fans!