Fur coats, frocks, and fast cars - a glimpse into the world of 1920s fashion drawings by Christina Koning 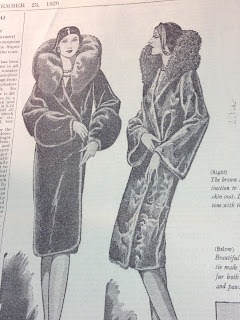 Researching my latest novel, ‘Game of Chance’ - which is published today - has involved me in some enjoyably off-beat areas of research, from the detective stories of the Golden Age, to cocktail recipes, card-playing, the West End theatre, films, and popular music. In trying to convey a flavour of the times - the late 1920s - I’ve found contemporary newspapers invaluable, not as a source of information about political and social events, but also as a marvellous ‘window’ onto a vanished world. 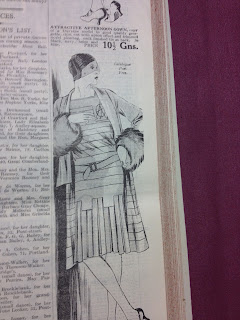 Here are accounts of glamorous parties, and the clothes that were worn at them; here, too, descriptions of the latest ‘Paris’ fashions - such as this one from the columns of the Times, for January 1929: ‘Skirts will probably be a little longer this Spring. Already French ladies are insisting on an inch being added to their skirts… Ladies are getting their real jewels from the bank to wear with their evening dresses. On plain satin, taffeta and georgette or chiffon, jewels looks right, but they must not be crowded…’ 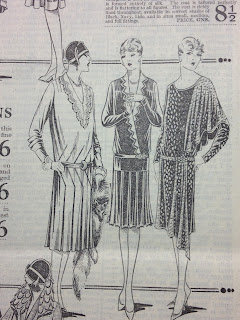 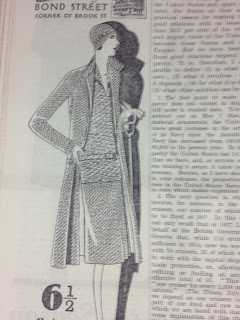 Also to be found are the graceful line drawings that were used to advertise the latest fashions (photographs being relatively rare in advertising at the time). I’ve made a selection of some of these, which seem to me to epitomise the elegance and sophistication of the era. 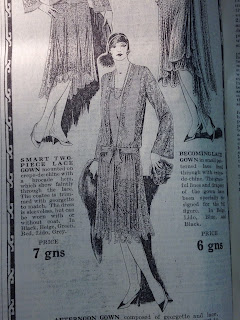 And so there are fur coats aplenty (no anti-fur lobby then!), as well as chic satin cocktail dresses, ‘tea gowns’ for afternoon, clothes for playing tennis and golf (the new craze) and all kinds of evening dresses: ‘It is now possible to buy a supple Bianchi brocade of black satin interwoven with gold roses in tarnishable metal thread (rhapsodises the Times fashion columnist)… a soft buff brocade with a design of silver palm-leaves and, loveliest of all, an ethereal blue brocade with a design of stars in silver…’ 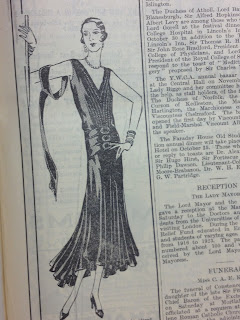 For the thrifty, there were regular Sales advertised, in which you could buy ‘Handsome, Natural Mink Coats’, reduced from the whopping price of 350 guineas to a more affordable 189 guineas… or ‘Evening Gowns in Lace and Georgette, the flared skirt dipping to the side in a new line’, in Shell Pink, Eau de Nil, Pale Blue, Violet, and Black, for a mere 6 guineas. 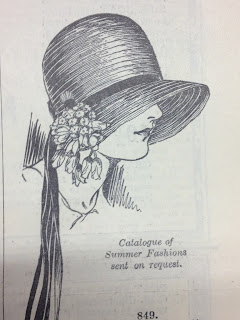 Nor was the man in one’s life left out. Ads for the latest motorcars - Hispano-Suizas, Rolls-Royces, Wolseleys, Bentleys, and Alfa- Romeos - are interspersed with those for Players cigarettes - ‘100 for 4s 10d’ - and garments such as the following, from Harrods Man’s Shop: ‘The Five Guinea Basil Coat - Double-breasted, broad-shouldered, clean-waisted - a man’s coat in every line. No ambiguity about material, either. 100% pure Saxony wool, woven on West of England looms - stuff that will endure…’ 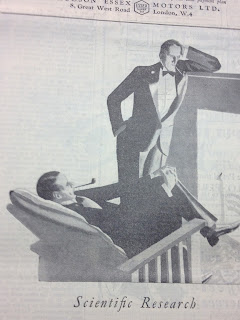 Of course, there was another side to all this apparent ease and luxury, as reflected in the social columns of the Top People’s paper. Underlying the insouciance is a note of growing unease at the worsening economic situation, which was to culminate in the Wall Street Crash of October 1929, and which was already causing widespread hardship and unemployment across the world. 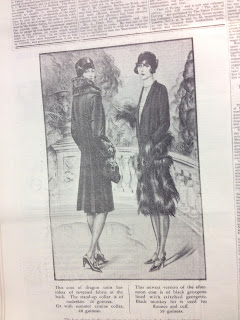 In the Times for January 1st, 1929, among the ads for Sealskin Coats at 59 guineas, and new productions of ‘On Approval’ at the Fortune Theatre, or ‘Funny Face’ with Fred Astaire (to be followed, perhaps, by supper at the Kit-Kat Club, for what would then have been the extravagant sum of 15 shillings and sixpence) are to be found headlines such as the following: ‘Unemployed Men to March to London’ and then the news item itself: ‘A “Red” march to London is being organised by the National Unemployed Workers’ Committee Movement, and it is hoped by the organisers that nearly 1,000 men will arrive in the capital early in February to draw attention to the unemployment problem in industrial areas…’ 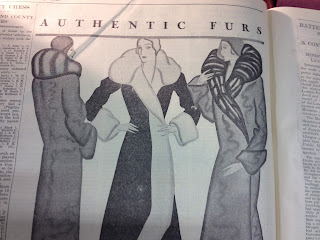 Looking at these charming images now, with the knowledge of what was to happen across the globe in the aftermath of the financial Crash, it’s hard not to see them as epitomising a sort of ‘fiddling-while-Rome-burns’ mentality. 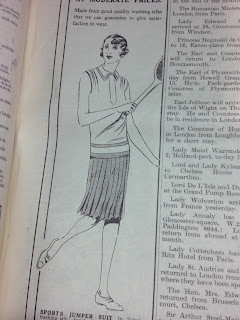 Certainly, by the following year, the mood had darkened considerably, with even fashion advertisements being couched in the language of ‘economy’ and ‘thrift’: ‘Can you dress with economy, without sacrificing chic, cut, or quality? Yes, if you come to the House of Marshall & Snelgrove’, announces one such ad for coats, while another is even more blatant: ‘Today, when economy is the theme of all discussions, the House of Debenham & Freebody maintains its long reputation for quality at prices which are found to be a real economy…’ 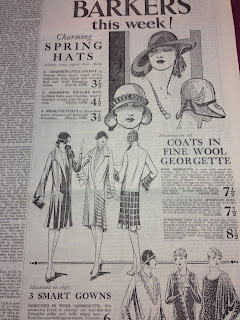 Although then, as now, the better-off (and most readers of the Times doubtless fell into that category)were able to ignore the crisis in a way those directly affected by it could not. 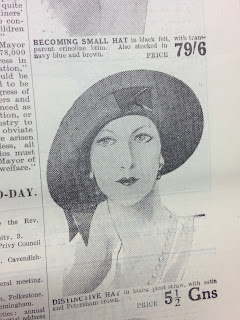 But perhaps one shouldn’t think too hard about what was going on behind the scenes, as it were, of these fashion drawings, but should just enjoy them for what they are. There’s something about the drawings themselves which is pleasing in a way that a mere photograph is not. 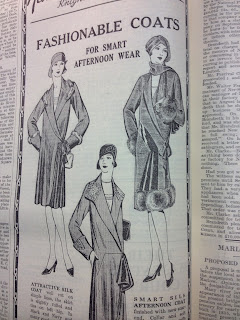 There’s a whiff of Modernist stylisation about them; a touch of the avant-garde. Is it fanciful to suppose that some of the artists might have been recent graduates from the Slade and the Royal College, forced to turn their hands to commercial art, in order to earn a living? Surely not. 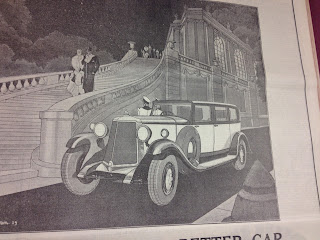 LOVE these images - what a fabulous way to get into the period! Now we know what Lady Mary was wearing and how much it cost. I also remember Marshall and Snelgrove in Birmingham. My mother regarded it as a very posh shop!

So elegant - and Happy Book Birthday!

Congratulations on your new book! My granny still wore clothes like that in the 1960s. Then I borrowed them.

Thank you all for your lovely comments and good wishes on publication day! I'm glad you enjoyed the post - it was fun to do... Cxx