Over the past two years, I’ve been reading memoirs from survivors of the Pacific War – that is, the Pacific theatre of the Second World War. Nearly all of them are awe-inspiring, and I’ve already blogged here about Freddy Spencer Chapman’s The Jungle is Neutral and Nona Baker’s Pai Naa: The Story of Nona Baker.

Refresher: historical sources are typically divided into two categories: primary (artifacts from or documents created during the time of the events in question) and secondary sources (an item that interprets and analyzes the primary sources). It’s a broad-strokes sort of distinction that makes putting together a bibliography more straightforward. Although memoirs are typically written after the events in question, they are generally classed as primary sources because their authors were involved in the relevant events.

However! Having recently read a fair amount of memoir, I’ve come to distrust its simple categorization as a primary historical source. This unease began with my first Pacific War memoir, Freddy Spencer Chapman’s The Jungle is Neutral (1949). It’s a brilliant book, packed with adventure and anthropological insight. Freddy’s voice is distinctive and charming, and while he shies away from emotional and psychological insight, I finished the book with a strong appreciation for his character (possibly too strong: my husband took to calling him "your historical boyfriend”).


Still, I wondered how Freddy could possibly recall the terrifying and chaotic events of his three years in the Malayan jungle in such impeccable detail. This is a challenge in all memoirs. I am hard-pressed to remember what I ate for lunch three days ago, and in times of conflict or high excitement I often question, after the fact, my memories of what went down. Yes, Freddy kept detailed diaries while he was in the jungle, but on several occasions he was forced to destroy them because they were at risk of falling into enemy hands. His surviving diaries are held at the Pitt Rivers Museum, but they cover only a portion of his time in the jungle.

After reading Freddy’s memoir, I turned to Brian Moynahan’s recent biography of Freddy, Jungle Soldier: The True Story of Freddy Spencer Chapman, for context. Moynahan is a biased biographer – a longtime fan of Freddy who wants to burnish and prolong his hero’s fame. Even so, at one point, Moynahan points out a significant discrepancy between Freddy’s surviving diary and an event he describes in The Jungle is Neutral. 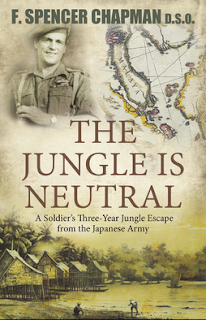 For publication, Freddy altered the event, probably in order to make it feel more dramatic. Moynahan disagrees with this decision, believing the original diary entry to be superior in terms of tension and the sheer danger of the situation. Either way, though, we now have a primary source (diary) imperfectly converted to a memoir - which is still technically a primary source. Yet we already know that it’s been corrupted. And if we have evidence of this with just one of Freddy’s surviving diaries, how many other events have been elided or embellished or just imperfectly reconstructed? We’ll never know.

This question becomes even more complicated when memoirs are written long after the events they describe and are mediated through others. Pai Naa: The Story of Nona Baker was first published in 1959, fourteen years after Nona Baker emerged from the Malayan jungle, contributed source material to Freddy Spencer Chapman’s official report on local Communist organizations, and returned to England.


Baker doesn’t mention keeping a jungle diary. Her narrative voice is quiet, wry, self-deprecating. She doesn’t in any way seek to portray herself as a heroine: rather, she insists that she was only “busily saving [her] own skin”. Perhaps this is why it took her fourteen years to produce a memoir, and why she distanced herself from the story even further: even though her narrative is written in the first person, the book is officially "by" Dorothy Thatcher and Robert Cross. To what extent is Baker’s voice really her own, here? And what sorts of artistic license have Thatcher and Cross taken with the shape of the story?

My last example today (though I have many more!) is actually a novel by Han Suyin (best known for her 1952 novel A Many Splendoured Thing, which was filmed as Love is a Many Splendored Thing and was also later adapted as an American soap opera). And the Rain My Drink is set during the Malayan Emergency of the early 1950s – the last days of the British empire in southeast Asia.


While And the Rain My Drink is technically fiction, Han Suyin inserts herself (using a name that is itself a pseudonym) into the novel as a character. This is a postmodern move which ought to undermine the ideas of narrative voice and the conceit of “truth” throughout the work. But the character Suyin tells her story in the first person, in conventional and realist terms. Because of this, and since the character Suyin’s biographical details map directly onto those of the author Han Suyin, the whole novel reads instead like a memoir of Han Suyin’s time in Malaya, with a few imaginative excursions. It presses the genre of memoir into the services of fiction - an act that points up the highly contrived nature of memoir itself.

Perhaps this is only appropriate – that we should end up in such an ambiguous tumult. A wide view of history will always include competing voices, and the line between fact and fiction begins to blur immediately upon examination. I’m thrilled to be feeling my way, step by careful step, in the company of such splendid adventurers.