The Slang Trap by Lydia Syson

What a terrible temptation for the historical novelist they are, those dictionaries of slang, enticing you seductively into worlds of rattling mumpers and snappish slubber-degullions. Hundreds have appeared over the centuries, rich mines of the most exhilarating treasures, the fantastic vocabulary of vagabonds and whores, sailors and thieves, mollies and swagmen, the language of canting crew and flashmen all there for the prigging. Sparkling lexical diamonds leap off the page at you, claiming vim and authenticity, begging to be borrowed. Surely they’re the salt and pepper of dialogue? Where else can we better hear the vulgar tongues of times past calling us loud and true? How endlessly beguiling they are. . .books like Hobson-Jobson (beloved of Rushdie, Stoppard and, surely, Amitav Ghosh) and the works of Francis Grose and Pierce Egan, which echo through the Newgate Novelists of the 1830s and straight into the gutter-speech of Joan Aiken’s Dido Twite.

If only it were that easy. Last week, I was in pursuit of an actual copy of Passing English of the Victorian, a Dictionary of Heterodox English, Slang and Phrase. I’d already found it at the Internet Archive, but intrigued by the wealth of sources – D. cls (Dangerous Classes), Mus. Hall (Music Hall), Society, Stock Exchange, Theatrical … I hoped, if possible, to flick through paper rather than digital pages. The very first entry is A.D., an abreviation which you might once have found on a ballroom programme. It means ‘A Drink’, but one young lady, looking flirtatiously over a potential partner’s shoulder, could easily imagine that he is already engaged to another for that particular waltz. Towards the end of the same dictionary comes ‘Word-mongering’ – an expression apparently used by the press in 1878 ‘in critical scorn’ signifying ‘redundancy of description’. A danger indeed. Nothing in this particular dictionary is remotely relevant to the book I’m working on right now, and there was no ‘hard copy’ to be found there, but still the Philology, Slang shelves of the London Library had me hooked. 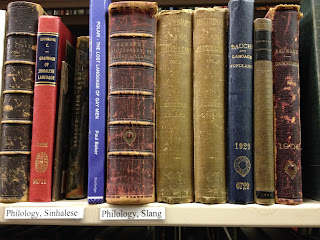 From amongst dictionaries of Polari, Austral English, seafaring speak, Robert Graves’ essay on the future of swearing and a hilarious reprint of a genuine phrasebook of English as she is spoke, a sort of 19th century version of Google Translate compiled by a Portuguese educational entrepreneur who was clearly translating literally from French, I pulled out Julie Coleman’s magisterial A History of Cant and Slang Dictionaries (OUP). The scales – of course – fell from my eyes.

‘‘The history of British cant and slang lexicography is long and frequently disreputable…Literary critics and historians seize upon them for background information, often without reference to the unreliability of their contents. Playwrights, poets, novelists, and film-makers turn to them for lively contemporary or period dialogue, equally unsuspecting that the word-lists might not be all they seem,” writes Coleman. Over four fascinating volumes, she teases out the knots in this ‘tangled tradition’, exposing the cheats and pilferers of the world of lexicography, rapping the knuckles of the undisciplined and unscholarly, and those who fail to take sufficient account of the complex social contexts in which real language presents itself.

Caveats abound. The father of canting lexicography turns out to be a man called Thomas Harman, who published a short glossary of beggars’ language in 1567 called Caveat or Warening for Common Cursetors: “Here I set before the good reader the lewd, lousy language of these loitering lusks and lazy lorels, wherewith they buy and sell the common people as they pass through the country.”  His plan was to rid the land of its undeserving poor by exposing the tricks and disguises of England’s rogues and beggars.

Through the seventeenth and eighteenth centuries glossaries, word-lists, and catalogues of slang from cant to flash multiplied. Their authors seemed to prig from each other as much as they did from the streets, back-alleys and gambling dens. By the mid-nineteenth century, Coleman finds attitudes had changed: ‘No longer menacing and thrilling glimpses of an exciting underworld, slang terms were just the vulgar, obscene, and profane effusions of the uneducated. They might provide a brief diversion, but those who sought respectability should steer clear of their contaminating influence.’ Later word-collectors betray a sense that they're recording an unwritten language just before it dies, or trying to preserve a time rather more adventurous and colourful than the present. Volume 3 covers 1859-1936, finishing just before the publication of Eric Partridge’s game-changing Dictionary of Slang and Unconventional English. Gems of this era include collections of American jazz-jargon from the ‘30s (The ‘Slanguage’ of Swing-terms the ‘Cats’ Use), Jewellery Auction Jargon from the 20s* and Die Männliche Homosexualität in England (1910) by Leo Pavia, the German translator of Oscar Wilde.  As Coleman points out, you can see who and what was deemed interesting and worth recording at any cultural moment: there’s glamour and romance in gangsters, hoboes, first world war soldiers and even college boys, but was anyone taking note of the slang of schoolgirls or shift-workers or indeed insurance salesmen?

I'm warier now, though also more addicted. What writer doesn't love encountering new words, and I've always been a sucker for the mystique of specialism - even chandlery shops excite me.  When I was writing That Burning Summer  I thoroughly enjoyed discovering exactly the right RAF slang a Polish pilot would have had to learn during the Battle of Britain (not to mention the fact that all the controls on British fighter planes were on the opposite side to Polish ones). And of course I'm all for accuracy and authenticity. But as a reader, if I start feeling an author has swallowed a (slang) dictionary, I'm quickly alienated. It's a very fine balance.  After this philological day, I went to the National Theatre’s new production of Our Country’s Good, a play I’d been wanting to see for several decades. Its themes remain horribly, depressingly relevant. One character, the erudite British Jew John Wisehammer convincingly loves (respectable) words with a passion, having learned them from his father’s dictionary (though only A-L). Liz Morden’s monologue accounting for her descent into crime sounds plucked from the pages of any lexicon of the canting crew. The effect is more flattening than vivifying. Historical novelists, beware. 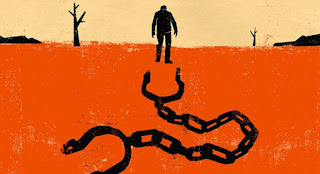 *Here's a sample of its obscurity: “Prat-the-shill – a verb phrase, giving an order to ‘shillabers’ to step to the rear of the ‘come-ons’. Its meaning is different from its connotation.” Baffling.

What a lovely blog to get both head and tongue around!

Very entertaining - the challenge of writing fiction set pre-Shakespeare is the amount of words simply not in existence never mind in slang use!