A few weeks ago, my husband and I were lucky enough to be taken on a tour of Pembroke College in Cambridge. Bron was at Cambridge, and he'd recently realised that someone he knew back then, Nick Davies, now teaches there, and is an eminent behavioral ecologist. They share a love of birds, and it was after Bron had read Nick's recent book, Cuckoo, about how cuckoos adapt their behaviour to trick their hosts, that he guessed the writer must be the student he knew years ago.

So we had lunch, and then Nick took us round the college. It was as he was showing us some of the portraits in the dining room that I noticed a familiar profile with a loose lock of hair falling over a high forehead. 'Oh yes,' said Nick. 'That's Ted Hughes. Didn't you know he was here?' Neither of us did. 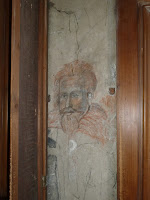 It's a beautiful college, with a chapel that was built by a youthful Christopher Wren. In one of the rooms, the Thomas Gray Room (yes, it's named after THAT Thomas Gray, and the manuscript of the famous Elegy is on display there) there is a portrait hidden behind a section of wooden panelling. It's a 17th century graffito of a youngish man with reddish hair and a beard, and it's said to be of Wren. It doesn't look much like the later portraits of him, but maybe he changed over the years - or maybe the artist was better at building than he was at catching a likeness. Anyway, it's a nice story, and whoever the subject is, it's one of those threads that lead you back into the past, to a particular moment on a particular day when, in a moment of rest, someone decided to pick up his chalks and start sketching.

But the greatest treasure, for me, was in the new extension to the library. We went up a flight of stairs, and there, facing us, was this glorious window*, etched with poems by Hughes and some of the creatures and landscapes that feature in them. 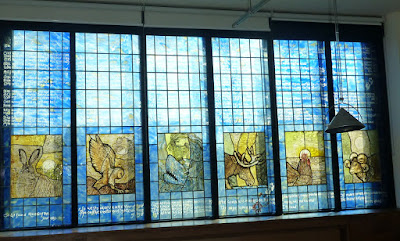 One panel is inscribed with the poem The Thought Fox, which Nick told us was generated during a long, dark night of the soul, when Hughes, labouring over an essay, saw or imagined he saw a fox...

Brilliantly, concentratedly,
Coming about its own business

Till, with a sudden sharp hot stink of fox
It enters the dark hole of the head.


It was after this experience, so the story goes, that Hughes realised that if he continued to do English, his ability as a poet - which he knew was the most important thing of all for him - would be stifled by the aridity of endless dissection and criticism. So he switched to anthropology. And later, much later, he went to a party, where he met a girl called Sylvia Plath... and the rest, as they say, is history.

You may have seen the splendid BBC documentary on October 10th about Hughes. In it, one of his contemporaries at Pembroke spoke of gatherings in Hughes' room, where like-minded students read their poetry to each other. It was always clear to everyone, he said, that Hughes was the leader, the one whose attention all the others wanted to capture.

In 1970, I had just started at Durham University. It was Freshers' Weekend and, for a girl from an ugly town in the industrial East Midlands, everything was incredibly exciting and beautiful and fascinating. I remember only one specific event from that weekend. It was a poetry reading. It was held in Dunelm House, in the Students' Union, and the poet in question was Ted Hughes. He would have been forty. I can't remember whether I'd even heard of him, though others certainly had.

But what I do remember is the incredible presence the man had, and the sense of gravity and sadness that he exuded. All the twittering and giggling and breathless excitement in that large room was stilled instantly as we took in this tall, brooding figure, which seemed to concentrate darkness within itself like the hawks and the crows he wrote about. When I compare dates, there's no wonder he was weighed down: although he had just married his second wife, Carol, Assia Weevil had only killed herself and their child the year before, and Sylvia had died in 1963. So much sorrow.

Logically, I think he must have read from Crow, as that came out in 1970. But the collection I have is The Hawk in the Rain, and that's how I think of him, standing there in Dunelm, reading to to an enrapt audience: his shoulders slightly stooped, his nose beaky, his hair falling over his forehead, his voice deep and as rugged as the Yorkshire countryside which bred him.

But I'm glad to think of all those happier years he had afterwards in the softer country of Devon, of all the other work he went on to produce. And I'm very glad to know that he has that beautiful window in Pembroke as a memorial, with the sunlight shining through and gloriously giving light to the images that pervaded his poetry and the words that formed it.

* The window was designed by Hans von Stockhausen. 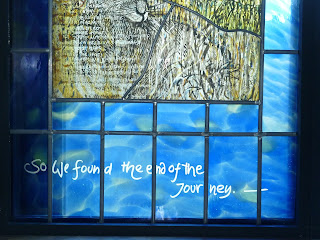