I'm sure that some of my fellow History Girls and our blog readers will have either tutored or attended an Arvon Course during their writing lives. For anyone who doesn't already know, Arvon runs a programme of residential creative writing courses and retreats for schools, groups and individuals. The five day courses are held at three centres: Totleigh Barton, in Devon, Lumb Bank in West Yorkshire and the Hurst in Shropshire and cover a wide range of genres, including fiction, poetry, screenwriting and playwriting.

My first Arvon Course as a tutor was at Lumb Bank. The 18th century mill owner’s house once belonged to Ted Hughes and is set in a distinctive Pennine landscape with woods all around, a river at the bottom of the steep bank and the ruins of old mills just visible along the valley. It is about half a mile from the village of Heptonstall where Sylvia Plath is buried. Her grave is an object of pilgrimage. Writers leave pens and other offerings. If I'm there, I always find time to make the steep climb up to the village to visit her grave. 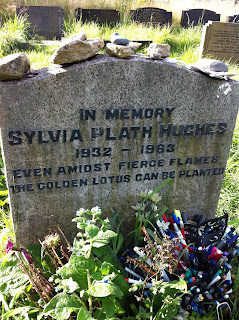 My co-tutor on my first course was the late and much missed Jan Mark. A writer of considerable stature, huge talent and enormous erudition, we will not see her like again. It is good to see some of her books being re-published in the admirable Hachette Hodder Silver imprint. They serve as reminder of just how good she was.  She was also a highly experienced tutor, who had taught on numerous Arvon courses as well as being a regular at Ty Newydd in North Wales. I couldn't have had a better co-tutor; I learnt a great deal from her.

Each day at Arvon is divided into workshops in the morning with individual tutorials and free writing time in the afternoon. The workshops are designed to look at aspects of the craft but also to stimulate new writing and can often be testing and challenging, pushing those participating out of their comfort zones. The one-to-one tutorials offer feed back and constructive criticism on work produced. The week is intense and draining for tutors and tutees alike, but at its best it can be transformative. Jan was a formidable tutor. Her workshops were brilliantly crafted to spur creativity and spark the imagination. She was quite willing to read anything and everything offered to her and she read every word. Her analysis was forensic and the criticism she offered, although not always welcome, was meticulously fair. Her advice was often to go away, try again, make it better. Wise words to any writer. She was also adamant that, while at Lumb Bank, writers had to engage in new work, not carry on with something that they had been writing before coming on the course. The last night is reserved for readings and new work was what Jan expected to hear. So that's what would be happening. No-one argued with Jan.

Jan was right, of course. Arvon has to be allowed to work its magic. And it is a kind of magic, a creative alchemy that comes from those five intense days and nights, the mixing of writers together, the focus on writing and only writing, the place itself. I still remember some of those Friday Night Readings, from this and other courses, how writers were transformed, how they wrote out of themselves.

The most satisfying thing for a tutor is when a piece of writing that you remember, that was conceived at Arvon, becomes a book. One of the writers on that course was Tricia Durdey. She came with a  book already finished, she was just going to do a bit of final editing but Jan wasn't going to allow that. Tricia had to go away and think again. She came back with an idea for something she'd long wanted to write. A story set in war time Holland, involving a dance teacher and her class. It sounded intriguing, different. I told her to give it a go. She did. I can still remember her Friday night reading. Powerful, arresting, moving. Even Jan was nodding and smiling. I told Tricia that she should develop it into a novel, which she did, only to fall foul of mainstream publishers with their 'Not quite right for our list/the market'; 'If you could just change this, change that, make it for Young Adults/Real Adults/Children, give it another title...' and so on - we've all heard it - but she did not give up. Tricia has written about her experience of writing the book here.

By happy coincidence, another writer on the same course, Jan Fortune, went away and co-founded Cinnamon Press . Even more Arvon Magic. Not only are they writing books and getting them published but they are starting their own publishing houses.  How brilliant is that?

Jan has now published Tricia's book, The Green Table. My congratulations to both of them. Tricia has fulfilled her ambition to tell the story of dance teacher Hedda Brandt's struggle against Nazi oppression in wartime Holland. As Hedda's class dwindles, first the Jewish girl goes, then the girl handicapped by polio, we are reminded of bleak choices to be made, the heroism and sacrifice of ordinary people and the words of Pastor Niemöller: 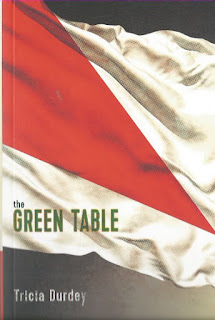 The Green Table is a story of love, loyalty and courage. Tricia makes fine use of dance and music to express spirited defiance in the face of brutal occupation. The book is beautifully produced and contains all the originality and passion I first heard on that Friday Night Reading in the sitting room at Lumb Bank.

Thank you for this - the Arvon Centres in England and Moniack Mhor in Scotland are indeed places of magic!

Before I was published the small publisher which had held my hand as I wrote my first novel (this NEVER happens nowadays) sent me on a course at Ty newydd with Jan Mark and Catherine Fisher. I owe them both an awful lot. Jan was so generous to me.

Yes - Arvon courses do create a kind of magic. It must be something in the air - I wrote about Ted Hughes here a couple of days ago.

Saw your post, Sue. Serendipity. Jan could be very helpful to writers she thought talented. She obviuosly spotted you, Catherine!

I felt privileged to be invited to contribute a small piece for the Arvon book of life-writing a few years ago. Biography was one option on my social and cultural history ma at Birkbeck, and I was lucky to have Carole Angier as my tutor, who then wrote for Arvon. Wonderful how such friendships last and we can share an learn together.

It is, Clare. Really sad to see you leave the History Girls. Thank you for your support. I hope you keep reading and posting. HGs has been another wonderful way of connecting with other writers and developing just the sort of friendships you mention.

I've been both an Arvon tutor and student - both were really stimulating. Some years the Society of Authors have had a brilliant scheme for members: non-fiction writers get a subsidised week of writing fiction. I've done that twice and got a lot out of it, and had fun, and made new friends.
My mother, Verily Anderson, was conceived at Ty Newydd, just before the First World War broke out. Could that be why she wrote nearly 40 books?!

What a superb post! I too tutored with Jan and our writers numbered people like Patricia Elliott! Long live Arvon!