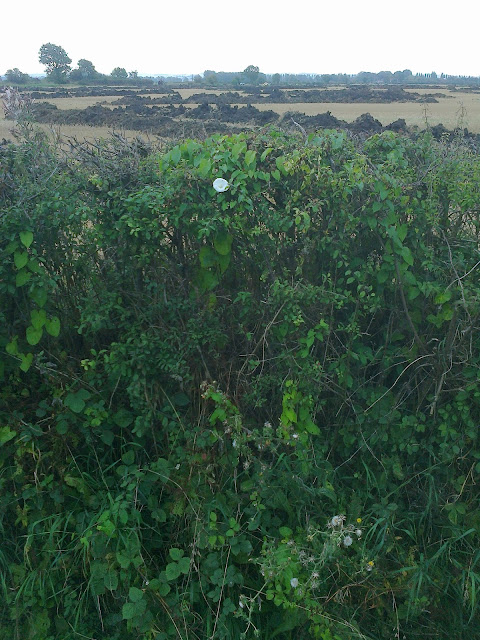 See you the dimpled track that runs
All hollow through the wheat?
O that was where they hauled the guns
That smote King Philip's fleet!

So begins 'Puck's Song' from Rudyard Kipling's love-song to England, 'Puck of Pook's Hill'. Enchanted by the Sussex countryside which was to him - born and bred in India - both home and 'strange', the stories in this classic children's book explore the layers of history which lie deep as leaf-mould in every part of this ancient land.

A few years ago a Saxon brooch was found only a mile or so from where I live in Oxfordshire. I saw it the same day it was taken out of the ground, and you can see it both as it was then, and after restoration, at this link.

This is what I wrote about it at the time:

I took a brisk walk out this morning to the Anglo-Saxon grave.

It was only discovered yesterday. We were out for an afternoon stroll in the mellow sunshine, taking a lane that runs out of the village towards the Downs in the distance, when we realised the wide, flat fields were full of widely separated, slowly walking figures (mostly men) with bowed heads, swinging long metal detectors. Every so often one would stop and dig a little hole, pick something up, then wander on.

We started talking to some of them. One pulled out a wallet and showed us a medieval silver penny. Another had more pennies, Roman and medieval: and belt buckles: and buttons. ‘And over there,’ they all said, pointing towards the furthest field behind a belt of trees – ‘over there, that’s where they’ve found an Anglo Saxon grave!’

Everyone was alight with it. A huge gold brooch had been found, together with some bones. The police had been called immediately and had thrown a cordon around the site. In their marquee by the farm, archeologists were already examining the brooch and we headed back to look, chatting on the way to a group of three men who wouldn’t have seemed at all out of place at a Saxon chieftain’s burial. Big lads, with acres of tattoos. One had long black hair, another a shaved head. One wore an enormous plaited gold ring on his thick forefinger.

‘Any luck?’ we asked. They were friendly, shook their heads: ‘Nah. Only rubbish today. Here’s what we got, on this table over here, take a look if you like.’

‘If you want some, have some,’ added the black-haired man. ‘It’s rubbish. It’s all going in the bin otherwise. But have you heard about the gold brooch?’

On the table was a clutter of stuff. Bits of pottery, coins, harness buckles, buttons, crumpled tin and lead. ‘Take it! Take it all!’ exclaimed the black-haired man. He shovelled it all into a plastic container. It was heavy.

‘When you start this game,’ explained the man with the gold ring, ‘you’re really excited about a coin or two, but then you get ambitious. Tell them about that ring you found.’

‘18th century, with seven diamonds,’ said the man with the black hair.

‘We’ve all found rings, one time or another,’ said Gold Ring Man. He laughed. ‘Once you start this game, you get addicted.’

We went on down to the tent. The brooch was there on display. It was the size of a large jam-pot lid, with a white coral boss surrounded by an inlay of flat, square-cut, dark red garnets. Around that, a broad band of bright yellow gold, with four set garnets standing out from it. Then more coral. And around that, a ring of intricate filigree, now black and dirty. People pored over it, photographed it, stared at it with awe, excitement, and reverence.

‘There’ll be another one,’ the archaeologist was saying. ‘They always come in pairs.’ And he had a look at the ‘rubbish’ the big guys had let us take away. It included four Roman coins, a bit of a medieval ring brooch, some Roman pottery, a lead musket ball the size of a marble - cold and heavy in the hand - and an 18th century thimble. Just a tiny fraction of what still lies under the dusty ploughlands.


Well, there wasn't another one.  If the Hanney Brooch ever had a twin, it hasn't been found.  However I thought you might like to see some of the stuff that Gold Ring Man and his mates were about to throw in the bin as 'rubbish'.  Here they are, laid out together rather like that awful party game of my youth where you had to remember and write down a selection of disparate objects placed on a tray. The pencil of course is there to give a sense of scale. To the bottom right is the stem of a clay pipe. I have no idea what the bronze, grooved object just above it may be, or the crushed copper thing just below the middle of the pencil. The thing below the point of the pencil is a bone with a hole in it, age unknown, and the curved bronze object to the right of the bone is part of a clip for holding down the loose end of leather belt. There is a small flower engraved upon it. 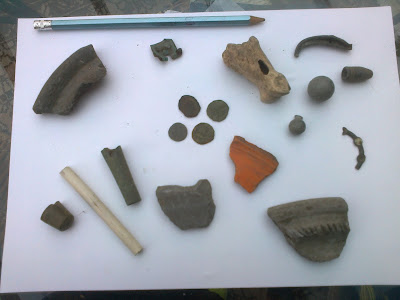 In the middle are four Roman coins to remind us, as Kipling wrote,

And see you, after rain, the trace
Of mound and ditch and wall?
O that was a legion's camping place
When Caesar sailed from Gaul!


(Actually they're probably later than that. But still.) To their right is a piece of red Samian ware which suggests that somewhere around here people were dining and wining with high-status imported pottery.  Diagonally from top left to bottom right are three pieces of thick, greyish pot: these - 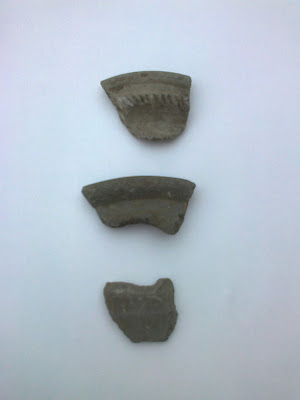 I'm ashamed to say I can't remember what the archeologists told us about these - whether they were Iron Age, or medieval - but how very different from the delicate Samian Ware!

Then there's a musket ball. 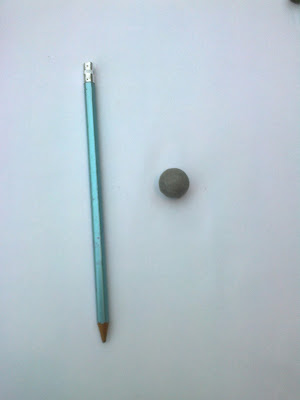 This fragile curve on the left is part of a medieval ring brooch, while to its right is an 18th century thimble. 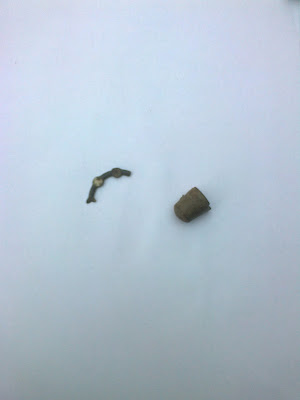 And these are the cast-offs, the bits and pieces one small group of metal detectorists were going to throw away and even the archeologists weren't much interested in.  Imagine how much else came out of the ground that day!

A couple of years ago, my brother was privately involved in charting archeological remains in a large field which was being developed for housing not far from Didcot, Oxfordshire. As the topsoil was removed, the clear outlines of over ninety pits and circles appeared, along with many shards of pottery and bones. My brother took photos and even made a survey of the site. But it proved impossible to attract the interest of any professional archeologists, and the field is now a housing estate.  You can see some of the darker pits, here: 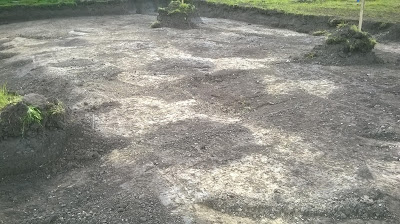 And in close up, here: 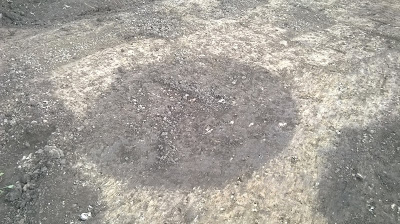 While here are some of the pottery shards: 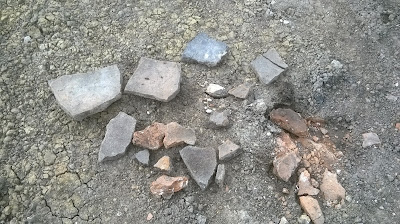 
Move on to the present day, and our small village is informed of a planning application to build 600 houses in some of the fields across which those metal detectorists were doggedly plodding back in 2009.   While recognising the need for more homes, especially affordable homes for young people, 600 houses springing up on the outskirts of a tiny village (whose school is already full) is a big, big change. And I really don't know how 'affordable' those houses will be. It may be that in the end a smaller number of houses will be built.  But I'm happy to report that partly as a result of information supplied by the Hanney History Group, 82 trial trenches have just been dug in the field where the development is planned, and an archeological excavation will take place to discover just what, if anything, is really there. I nipped out a day or two back to take photos. 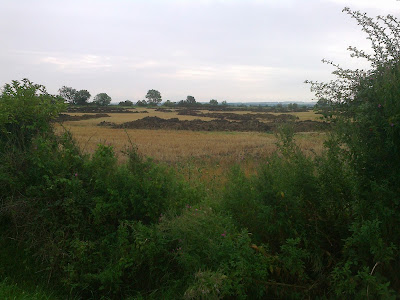 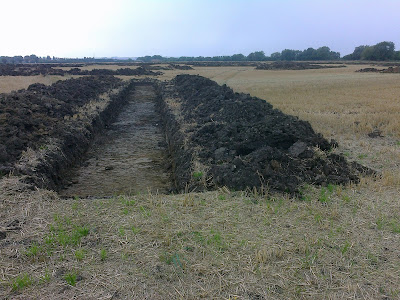 The truth is, dig a hole in the ground almost anywhere in England, and you're likely to turn up spadeful after spadeful of history - and houses must be built nevertheless. But important sites shouldn't be built over without any preliminary investigation.  So well done to the Hanney History Group, and I'll keep you posted as to what comes next.

See you our pastures wide and lone
Where the red oxen browse?
O there was a City thronged and known
Ere London boasted a house!
...
And see you marks that show and fade
Like shadows on the Downs?
Oh they are the lines the Flint Men made
To guard their wondrous towns!

Trackway and Camp and City lost.
Salt marsh where now is corn;
Old Wars, old Peace, old Arts that cease,
And so was England born!

She is not any common Earth,
Water or Wood or Air,
But Merlin's Isle of Gramarye
Where you and I will fare. 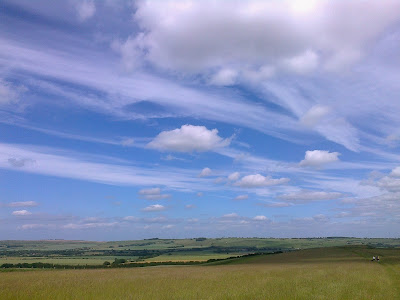 Fascinating post! Real archaeology isn't about gold statues and necklaces, though those are nice. It's about finding out about the past. I regret that I missed out on the Little Lonsdale St dig in Melbourne. It turned up a lot of information about the history of this city, about how people lived...

When I visited the UK back in the 80s, I was struck by how much history was about me - little things, such as a 500 year old pub still in use.

But then, there are the big things too. Imagine how things would have been if there had been an archaeological dig BEFORE a certain car park in Leicester was built. ;-)

This is all really interesting. I had no idea so many small things were rejected by archaeologists - but then there must be so much stuff, if you know how to recognise it.

And I have always loved that last verse.

Thank you for this, it is fascinating. I did some archaeology for the first time this summer, in Dorchester on Thames (so not far away!) and I was staggered by the quantity of stuff, especially pottery, but to me every bit was special.

And interesting that you talk a lot about Kipling and also "that awful party game of my youth where you had to remember and write down a selection of disparate objects placed on a tray"... which is of course "Kim's Game" from the book by Rudyard Kipling. :-)

So it is, Caroline! Thankyou!

It's sad to think that treasure seekers will dismiss any ancient artefact as 'rubbish'. They are the poorer for it, if all they can see is the gold.

This is wonderful! We find bits of old blue and white pottery, old bricks, once the rusted remains of a ploughshare, and also a clay pipe, in our garden. Alas, future generations are likely to find a lot of plastic. I hope they find it interesting..