If Phryne Fisher had not been fictional, she probably knew two of my great-aunts.

Today my thoughts keep returning to Phryne Fisher. I’m just discovering how very popular she is outside Australia. What brought these thoughts to me was not her popularity. It was Table Talk. Table Talk was a Melbourne magazine published from 1885-1939. Wikipedia tells me it absorbed Punch for its last decade or so of its existence.

Table Talk appears (sort of) in Kerry Greenwood’s Life of Phryne (normally described as detective novels, roughly translated into a TV series) and it appeared in the Polack Saga (my family’s unwritten history).

Let’s begin with the Sisters Polack. They were spinsters and ran a very exclusive shop in 17-19 Royal Arcade, Melbourne. That’s the arcade looked after by Gog and Magog. I go to the Arcade these days mainly for hot chocolate. It’s still full of the kind of style one associates with Greenwood’s novels. You can see why Phryne would have known the shops there, just by walking down the ground floor, admiring the shop windows.

Table Talk consulted with my great-aunts about what styles and fabrics were about to emerge from Europe and somesociety women ordered their tennis dresses there. Possibly not Miss Fisher or her ilk. She might have known them, however, because it was a good place to buy accessories, get changes made to a garment, and possibly to hang out.

This amuses me, for my family is Jewish. So very Jewish that I borrowed from the Polack sisters’ lives (just a smidgeon) to create a scene in The Wizardry of Jewish Women. Which now has a new cover, so let me share that with you. (Today is the Day of the Pictures and the Day of Unexpected Capital Letters and most certainly the Day of Bracketed Thoughts.) 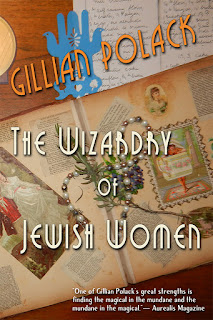 Why is the family near-link amusing? It’s not only because my great-aunts dressed Melbourne so beautifully and I myself am not a sartorical treat. One of Kerry Greenwood’s Phryne Fisher novels used the Melbourne Jewish community of that time as a setting.

The lives of her characters are very far removed from the lives of my great-aunts. The Misses Polack spoke no Yiddish and used their raisins to make fruit cake. They ate the family Christmas pudding. No Yiddish, no raisins. Afternoon tea with a silver service. Very Anglo-Australian in their Judaism. Very educated, but not in most of the matters that Greenwood uses in the novel. Their niece was a pianist and Gilbert and Sullivan was more important than Kabbalah.

I talk about this side of the family a lot and I put it into a novel, because it doesn’t get talked about or written about much in fiction. Greenwood’s Raisins and Almonds fits what people think of Australian Judaism much more closely. The Jewish community in Melbourne during that time was mixed and complex and could easily fit both groups, and more.

Images of Melbourne flood my mind whenever I read the Miss Fisher books or watch the TV series. I've lived in Canberra for years, but my childhood included time in Phryne's part of Melbourne, for I lived in a south-eastern suburb.

An important location for filing Phryne is Ripponlea. Even this building overlaps with my life. Mainly, let me admit, the sort of overlap you get with school excursions. My old school friend (who’s not old, but we’ve known each other for most of our lives) took me there for a recent birthday, in memory of all those times we wandered round the building.

In the Phryne Fisher series, that single building is used to represent more than one location. I’ve been tested by this ever since the series was first released. Every episode I wanted to ask why this staircase was not considered to be in the same house as the room a scene took place in ten minutes earlier. This means that when I visited last year, I took photographs of all kinds of corners and angles, so that I could anchor myself and not be led astray by filming. Pictures like this.

It all comes together, though. The past and the present. The film and the reality. I hinted at this in the last picture. The reason we were in Ripponlea that day was to see an exhibition of the costumes from the latest season of Miss Fisher. This means you can decide for yourself if Phryne would have bought a tennis dress from a Polack.

Melbourne is a character in the Phryne Fisher novels. There is one novel set in Sydney, and Phryne travels outside Melbourne, but other than that, it's very Melbourne-centric, and the landscape is a character...

I remember once when a building project was going in Elsternwick, where my mother lives, a building was torn down, exposing the side of the old building next door, which had a billboard ad that must have gone back to Phryne's time, the 30s if not the 20s. A pity they covered it all back up again when they put up a new building next door.

I bet your great aunts never said, "Oy!" and such things, as Kerry Greenwood's Jews do... But she does have the Carlton community that was there at the time.

I go to Royal Arcade for chocolate - the Haigh's chocolate shop, with the little man in the window, who came from another old shop. Up it is indeed a special place!

Greenwood has part of the Carlton community. Not the part that was related to me. I love this - that there were such cultural differences in Jews who were all Australian and lived in the same street!