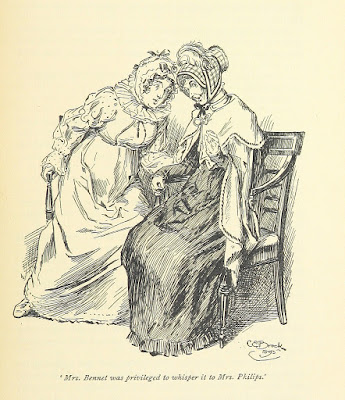 Apologies if I’m repeating some of what other bloggers have written this month but I find I have a lot I want to say about her. Cassandra’s naive drawing of her sister looks down at me as I write. For me, her novels are associated with a strange period when I was twelve. I was ill and lay, for weeks it seems, on my parents’ sofa reading Jane Austen’s novels. I was young enough to be pleased to be reading grown up books and far too young to appreciate the brilliant subtlety of her voice. Thirty years later, I watched my daughter discover her novels with the same delight. I never had the misfortune to ‘do’ Jane Austen at school and I think it’s the test of her greatness that she is one of the writers who has grown up with me. Now I read her with the same wonder I listen to Mozart; because she makes it look so easy.

Although I’ve seen some good adaptations of her novels I never feel the characters look quite right - too modern? Too knowing? Too slouchy? I prefer the old illustrations here to stills from the films. 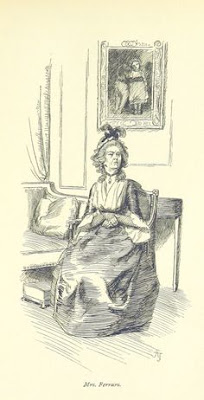 How I wish adult novels still had illustrations. Here is Mrs Ferrars from Sense and Sensibility.  The plots are not original and Walter Scott, in a review when Emma was first published, complained that it had “even less story” than Sense and Sensibility or Pride and Prejudice. Two hundred years later, most people find Scott unreadable ( pace, Catherine Hokim), while Jane Austen’s novels are universally loved. Her dialogue is brilliant and this does come over in the film and TV versions but I miss her wit and irony. To savour her ruthlessly lucid vision I think you have to go back to the books themselves. Emma has always been my favourite. When we first see Emma’s father, the hypochondriac Mr Woodhouse:

His spirits required support. He was a nervous man, easily depressed; fond of everybody that he was used to, and hating to depart from them; hating change of every kind. Matrimony, as the origin of change, was always disagreeable;

Emma’s thoughts are given to us in a way that is still remarkably fresh. For example, in Chapter 16:

The hair was curled, and the maid sent away, and Emma sat down to think and be miderable. - It was a wretched business, indeed! - such an overthrow of everything she had been wishing for! - Such a development of every thing most unwelcome! -Such a blow for Harriet! - that was the worst of all.


Those dashes are like bolts of energy and, as John Mullan has pointed out, Jane Austen was a pioneer of free indirect style, where the narrative adopts the sentiments of the characters. Can anyone think of an earlier novelist who does this? 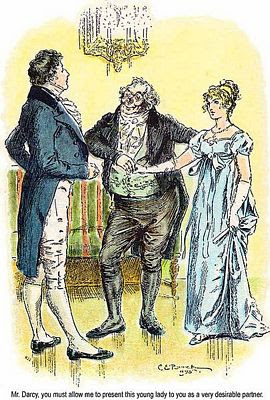 Austen's characters are not just fully alive but also have afterlives (which might be why they have inspired so many sequels). Apparently she used to enjoy discussing this with her family. According to her nephew, James-Edward Austen-Leigh, his aunt told the family that Miss Steele never succeeded in catching the Doctor; that Kitty Bennett was satisfactorily married to a clergyman near Pemberley, while Mary obtained nothing higher than one of her Uncle Philips’s clerks, and was content to be a star in the society of Meryton. Mr Woodhouse would die two years after Emma’s marriage, allowing her to move to Donwell (and perhaps retrospectively justifying his hypochondria), while sensitive Jane Fairfax would apparently have nine or ten years of married life with Frank Churchill before her death.

By comparison almost all other writers waffle. She is, strangely, more modern and accessible than many later writers because she does not waste a word. Even Dickens and George Eliot are often verbose and pompous by comparison - their moralising shouts at the reader while hers whispers. 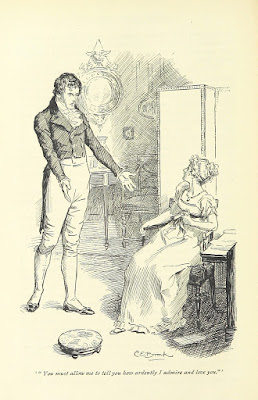 "You must allow me to tell you how ardently I admire and love you" - the great love declaration from Pride and Prejudice.

Lovely piece - and good illustrations. I look forward to meeting you!

How lovely to see these illustrations! Thank you for such an interesting post.

Do so agree about the illustrations!