I overlooked LONGBOURN, the novel by Jo Baker, when it was published in 2013.

However, Joan Lennon’s recent History Girls video-post, where the adept presenter needed help with dressing herself in her Regency Lady garments, brought out all my usual niggles.

Who did the work involved in the delicate and many-buttoned dresses? Who looked after all the laundry and the house and the meals? Who ran the Bennet household for them?
Those questions, and a fragment of conversation, reminded me about  LONGBOURN, the novel, once more so I found a copy just in time to read it as part of the History Girls celebration of the 200th anniversary of Jane Austen’s death,and to offer some of my reflections 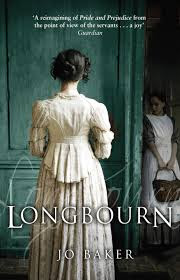 LONGBOURN runs alongside the plot of Pride and Prejudice, but Baker is telling the stories of the servants at Longbourn House: housemaid Sarah, housekeeper Mrs Hill, Mr Hill and eleven year old Polly, or as Austen describes them:
"the butler . . Mrs Hill and the two housemaids"
The novel does not focuses on Elizabeth and Darcy, but on Sarah's developing relationship with the mysterious new stable-hand, James Smith.

The book constantly reminds us of the impact of the weather on those lives and times. We first meet sixteen year old Sarah early on a January morning, bringing water in from the outside pump, ready to start on the laundry. Later, as Lydia sips her sugared milk and complains to Miss Hill in the kitchen:

Next door, down the step to the scullery, Sarah leaned over the washboard, rubbing at a stained hem. The petticoat had been three inches deep in mud when she’d retrieved it from the girls’ bedroom floor and had had a night’s soaking in lye already: the soap was not shifting the mark but it was biting into her hands, already chapped and chillblained and making them sting.

Sarah’s rough hands seemed to me to be an almost constant symbol within the novel, making those petticoats seem less carefree garments, and highlighting the fact that the Bennett girls are happy to drop a newly-pressed silk dress on the floor, and to believe that their dainty stitchery and silk-thread embroidery is “work”.

Meanwhile, the real work goes on, inside and out and when James appears and takes on some of the heavy work, his strength and thoughtfulness is welcomed. The first hint of his good nature is when Sarah wakes and find water in the boiler and the fire lit.

All the way through, the Longbourn servants – housemaid Sarah, housekeeper Mrs Hill, Mr Hill the butler and eleven year old Polly - have little choice but to accept orders. Even so, they seem to be tolerant and proud of “their” family: Mrs Hill talks fondly of the girls “innocence”, while making sure that Sarah remembers that a servant life must be different.

The book also shows that Longbourn is also home for the servants. Sarah and young Polly, both brought there as destitute children, have been trained by Mrs Hill and Longbourn is their only security. We see Longbourn as a usually-kindly household, where the servants know there will be food and shelter, and a sense of the beauty and quiet in their isolated Hertfordshire location.

Sarah, however, is at an age when her own eyes are opening to aspects of society beyond Longbourn’s fields. She starts to fret about the limitations of her situation and the extreme reticence of James. Sent into town, Sarah is as excited as the Bennet girls when the red-coated Militia arrive in town. However, unlike those young ladies, she witnesses the brutal flogging of a young “deserter” at the the street barracks, a moment that suggests something about James’ behaviour to the reader but not to Sarah.

After Darcy and Bingley's arrival at Netherfield, Sarah becomes fascinated by Ptolemy, Bingley's elegant, well-mannered black servant and the distinct attention he shows her. Brought over from the family’s sugar plantation, Ptolemy has learned to use his looks to advance his position, but shocks Sarah with his real attitudes on the night of the ball.

Later on, after coming across the rigid hierarchy of servants in a grand house and meeting Ptolemy again, she looks again at her life back at Longbourn.

LONGBOURN has several memorable scenes, apart from the laundry as we step into the setting. One is the coach journey from rural Hertfordshire into to a dirty, disreputable London and on to : the reader does not sit inside the carriage but outside with Sarah, strapped to a kind of shelf and braving the weather – and also likely to be toppled on her neck if the carriage overturns. Another vivid account comes in a later part when, suddenly stepping outside the book’s setting, Baker describes James Smith’s horrific experiences during the flawed Spanish campaign against Napoleon, a flashback that explains much of his story and character. The difference between the power of the commissioned officer and that of the ordinary soldier is brutally demonstrated, both in the field and during the flogging in Meriton.

At times, I was half-amused by my reactions to the novel. For example, I felt a sense of imposition when Sarah is sent out into a torrent to buy last-minute “slipper roses” for the girls to wear at a ball. At another moment, I was recoiling: Mr Hill the butler regularly spits on the silver forks to polish them for the table. Later on, an account of Mrs Bennet’s early married life, her many pregnancies, and another significant matter, offered a different understanding of Mr and Mrs Bennett and their unhappy relationship.

One theme that comes through strongly in LONGBOURN is the precariousness of people’s social situation at that time, and at all levels.

When Mr Collins visits his inheritance, the Longbourn servants know their own future employment will depends on him noticing them favourably, and when Elizabeth’s refuses him, we see this action could damage them as well as the Bennett family. As Baker reveals an age when inheritance and preferment mattered so much, her drawing of Mr Collins is much more sympathetic, certainly than some tv adaptations.

On the other hand, seen from the servants' knowledge, Wickham is shown as a far worse character: predatory, full of cruelty and vice. One fears for fifteen-year-old Lydia, and sees her concept - and ours - of a romantic world undercut by a dreadful reality.

Although the story eventually circles away from Longbourn into other territory, it ends with a bold search, an eventual reunion, and hints at the changes coming towards the rural rolling landscape of England.

I did not hear much of an Austen voice - unless you recognise the quote below - that is there to be admired in PRIDE AND PREJUDICE, but I felt that LONGBOURN was well worth reading for the glimpse the novel gave into eighteenth century society and as an antidote to Regency romance.

"There is nothing like the imminence of a parting to make people unduly fond of other people." 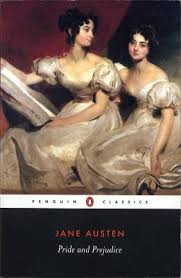 Sounds like an interesting exploration of the servants' world in Jane Austen's time. I rmemeber many years ago that it came as quite a shock to realise that, if I'd been living in the time of many of the books I loved reading, I wouldn't be the heroine, Lady Susan, but a kitchen maid or something similar!

I was really struck by the anxiety the servants feel,in this book, for their futures if Mr Collins moves into the house, partly balanced by his own fears of losing his living if he offends his patron.

Thanks, Penny - I went straight to Amazon and bought this book. (Currently, the kindle edition is at £1-99.) It sounds a fascinating and - to me, as to you - entirely sympathetic read.

Thanks for introducing me to this book!

One of the tiny details that stood out for me was the throwing of damp tea leaves onto a dusty floor to stop the dust from flying everywhere while cleaning.

Glad you all like the sound of LONGBOURN, and hope that the readers enjoy it. (It was Joan's lady in white that set me off on the quest.)

I'd already heard of using tea-leaves to collect the dust, Becca, but rather wish I hadn't wondered whether disreputable housekeepers might rinse the leaves out afterwards and sell them further downwards to the poor as "tea". Some things are best not dwelt on!

My grandmother used tea leaves to clean the carpet! And the maid beat them outside over a frame. I really enjoyed Longbourn but was surprised and disappointed that Ptolemy was portrayed as a man Sarah shouldn't get together with. Makes me think of the removal of the marriage of the black servant and a white female servant from Edgworth's Belinda. Or one of her novels. I think it was Belinda..

I read it when it came out and loved it! Even though I found the "secret" totally unconvincing.

I enjoyed the book too, but the part I remember best is when Elizabeth came back from her walks with the hem of her dress so muddy, the servants knew it would be their job to get it clean again. I really felt for them!

I'm reading it now, Penny, and loving it! It had been sitting on my to-be-read pile for an unaccountably long time, but your review has prompted me to move it to the top. So thank you for that!