Lady Maud Hoare and the silver trowel by Janie Hampton 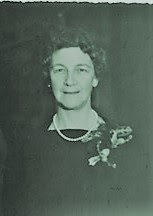 Lady Maud Hoare in 1941
Some years before she died, my mother gave me an old silver trowel as a birthday present. With its chunky, solid, ivory handle it has the weight and shape of a real builder’s trowel, and does the job of picking up cake and flans very well.
I recently received an email from the Royal Air Force College in Cranwell, Lincolnshire. They had found an empty presentation box with an indentation of a pointed trowel. Now they wanted to find the actual trowel that had been used to lay the foundation stone of their college in 1929. The box was duly sent to me, and sure enough, like Cinderella’s shoe, my trowel fitted. The only problem was, it had the wrong inscription. Made in Sheffield in 1926, the ornate inscription reads: 'Presented to the Lord Bishop of Chester, to commemorate the laying of the foundation stone of St Chad's Church, Blacon. June 11 1929.' (This Anglican bishop, Luke Paget, came from an unusual family: his father was Bishop of Oxford, one brother was the Archbishop of Central Africa and another an army general - their mother must have been very proud!)
RAF Cranwell College had been founded in 1920, and housed in barrack huts built during the First World War. In order to foster tradition and inspire the air cadets, they needed a permanent building. Sir Samuel Hoare (1880-1959), the Minister for Air since 1922, also understood that the RAF Cadet College was a temporary and precarious service and for the future defence of Britain, it was important that the RAF had equal standing with the other British armed forces, the navy and the army. Early in 1929, Sir Samuel formed a plot. He obtained the authority to commission architect’s plans for an RAF College and commissioned Sir James Grey West (1881 –1951), an eminent architect in the Office of Works. His first design was inspired by London’s elaborate Victorian-Gothic St Pancras Railway Station. This was rejected, possibly on grounds of taste. His second set of plans, based on the  Royal Hospital Chelsea designed by Christopher Wren in 1692, was accepted. But the Ministry of Air had no authority or budget from the government to construct the building, and a General Election was due in a matter of weeks. No expenditure had been authorised for anything other than the plans, and Sir Samuel could soon be out of office. There was no time to lose. Sir Samuel realised that whatever the outcome of the election, if the building of Cranwell College had started, whether the government was Conservative, Liberal or Labour, they were likely to finish it. The Marshal of the RAF, Lord Trenchard, (1873 –1956) and Sir Samuel quickly arranged for an official laying of the foundation stone before the dissolution of parliament. The night before, the RAF cadets held a clandestine mock ceremony, sharing caricature performances of the leading dignitaries.
The 29th April, 1929, was wet and windy but the ceremony went ahead. It began with a parade of the Cadet Wing, Airmen’s Wing and the College Band under the Assistant Commandant, Wing Commander Douglas Strathern Evill. Sir Samuel was received with the Air Salute, and after inspecting the Guard of Honour, joined the other guests on a wooden platform, erected in the field near the temporary huts. The VIPs included Lord and Lady Trenchard and Commandant of the RAF College Air Vice-Marshal Frederick Crosby Halahan, (1880 –1965), the architect Sir James Grey West and Sir Samuel’s wife, Lady Maud Hoare(1882–1962). Two years before she had been appointed Dame Commander of the Order of the British Empire for flying 12,000 miles to inaugurate the London via Cairo to Delhi air service. The Times newspaper reported that ‘She is the first woman ever to fly so many miles. There had been snow, rain, fog, sandstorms, but not a spare part was needed for the air ship.’
With so little time to make arrangements, Sir Samuel probably borrowed a ceremonial trowel from his brother-in-law Luke Paget, the Bishop of Chester, who was about to perform a similar duty on a new church in his diocese. Or maybe Sir Samuel bought a new silver trowel, there was no time to inscribe it and he then passed it on to his brother in-law to lay the foundation stone of St Chad’s Church in Cheshire.
Sir Samuel handed the silver trowel to his wife Lady Maud who placed some cement onto the foundation. The first stone was lowered by a small crane into place. The Chaplain-in-Chief, the Venerable Robert Edward Vernon Hanson, (1866–1947) said a prayer and then Sir Samuel gave an address, before the parade marched past the saluting base to close the ceremony. 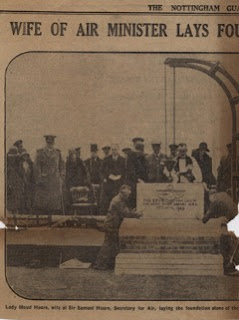 This was an act of bluff to persuade the government to fund the building; and an act of faith that the next government, whoever they were, would finish the job now it had been started. On 30 May 1929, the Labour party, under Ramsay Macdonald, won the most parliamentary seats for the first time but failed to achieve an overall majority. However, the new ‘hung’ government accepted the RAF plan and proceeded with the building, which was finished in 1933. Sir Samuel then presented over 100 lime trees (Tilia x europaea) stating that an avenue was an ‘indispensable attribute to a great house’. And when tea was rationed during the Second World War, lime blossom made an acceptable alternative.
As a British M.P., in 1935 Sir Samuel piloted the India Independence Bill through the House of Commons and as Home Secretary, in 1938 introduced Kindertransport  to allow European Jewish children entry into Britain. A brilliant politician, he knew how to achieve his goals, even if it meant using his wife to wield his brother-in-law’s silver trowel. There might have been a different silver trowel, inscribed with the details, but no-one has found it. Unless a diary or note revealing any of this emerges, or the trowel appears one day on Antiques Roadshow or Cash in the Attic, we will never know.
Posted by Janie Hampton at 00:30

You tell the best stories, Janie! I am passionate about objects and their ability to link us to the past. Great reading.